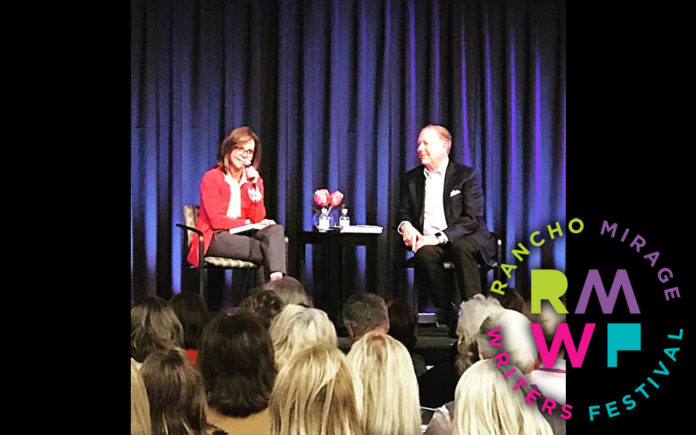 The theme this year was World War II and D-Day to honor the 75th anniversary of the Normandy landing.  With its primary focus on geo-political non-fiction authors, the festival always celebrates its Hollywood connections and includes favorite fiction authors as well.

Fiction writers Craig Johnson, Dennis Lahane and Meg Wolitzer took the stage to talk about their works. All three authors have had their material adapted for television and film.

Karl Rove, senior advisor to President George W. Bush returned this year after he charmed and entertained festivalgoers at the fifth annual RMWF.

Dr. Lucy Jones, the seismologist we all turned to when we experienced an earthquake attended.  She is the author of The Big Ones a book that looks at the earth forces and the world’s greatest natural disasters.

Authors Anne Applebaum and British Labour politician Lord Mandelson discussed if the US/UK “Special Relationship” was indeed still special.  Anne Sebba and Philip Each chatted about the future of the British monarchy and what might happen when the Queen dies.

Dr. Erroll Southers spoke about his book Homegrown Violent Extremism and how communities can reduce their risk.

Mike Reiss (“The Simpsons”), and Nell Scovell (“The Simpsons,” “Monk,” “Murphy Brown”) made festivalgoers laugh as they dished on Hollywood.

A book I’m excited about reading is Kirk Wallace Johnson’s The Feather Thief: Beauty, Obsession, and the Natural History Heist of the Century. He talked about his six-year investigation trekking around the world looking for zoological justice.

Author and historian H.W. Brand is another festival favorite.  He talked about his book Heirs of the Founders.

The RMWF is stacked with historians, scholars and political insiders speaking on and considering timely subjects and dynamic topics.  It is a powerhouse of informed, significant and eloquent writers.

On top of all the intellectual stimulation, the RMWF includes lunches, coffee/ pastry bar, and valet parking.

One of the things that make this festival the best in the world is that it is an intimate venue that allows for personal interaction.  The authors mingle and are accessible.  Seating is limited and tickets sell out within hours.

All of the author sessions are recorded and can be watched for free.  They can be seen on Rancho Mirage TV or go to the festival’s website www.rmwritersfest.org/videos.  Previous RMWF segments are also on YouTube.

The Seventh Annual Rancho Mirage Writers Festival will be held January 28–31, 2020 with another amazing line up.  With the presidential election in November ‘20, it should be a dynamic and outstanding festival as well.

Mark your calendar.  Passes go on sale March 1!  The cost for being a part of such an exclusive event is a great value even at $500.

If you want to interact on an even higher level with the authors, consider becoming an “Angel.”  Donations cover eighty percent of the festival’s budget.

RMWF is an awesome event.  Books, reading and meaningful conversation are essential to the health and well-being of our nation, community and ourselves.