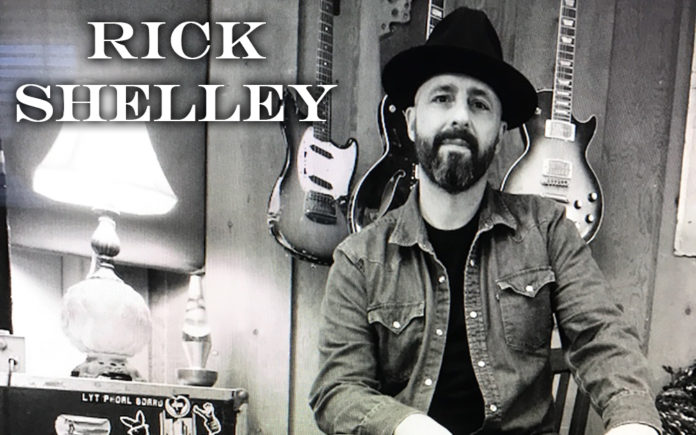 With The Desert Dogs, Gabriella Evaro and Adobe Collective on Thursday, March 22 at 8:00pm

Originally from Walla Walla, Washington, Rick Shelley moved to California in 1986. He performed in the bands RagTag and Woodshed before taking a long hiatus from doing music. His good friend (and CV Weekly music writer) Eleni Austin asked Phil Lacombe (CV Weekly) to book Shelley at a show he was putting on at Schmidy’s Tavern back in 2014. Shelley had been writing songs, but hadn’t been performing publicly until that night where the bug once again bit him. His well-crafted songs and amazing vocals immediately garnered him fans. From that point Shelley has released two solid CDs, 1909 Miles in November of 2015 and Hope Wrapped in Razor Wire in March of 2017. Both albums are chock full of potential chart topping songs that are infused with flavors of country, folk, rock and Americana.

Shelley’s vocals draw you in and wrap around you like a warm blanket.

Shelley took some time to answer a few questions about what he’s been up to.

Shelley: “Yes, I am writing, and I have material for another record. That said, I am not sure when I’ll start to record. The 2 previous records were built track by track, little by little.  We (Chris Unck and I) would start with single vocal and guitar and build the song up from there, adding bass, drums … etc.  That approach was slower.  Always fun, but slower.  It also didn’t allow much room for other players to expand the song or provide contributing ideas.  Chris brought in Damian Lester (Stand Up Bass), Tyler Saraca (Drums), Matt Pynn (Pedal Steel), and Bobby Furgo (Fiddle).  All of those guys are brilliant players and poured into the record where they could.   I couldn’t be more proud of how Hope Wrapped in Razor Wire turned out.  Next time though we will probably take time playing through, working arrangements before we hit ‘record.’”

CVW: What have you been up to musically since we last spoke?

Shelley: “I have mostly been playing. Going as many places as possible to play I have been up and down California a few times this past year touring on the record.”

CVW: Tell us about the show coming up at Pappy’s?

Shelley: “The Pappy’s show is a ‘High Lonesome Studios’ production.  Chris Unck wanted to showcase bands and artists he’s involved with. This time around it’s The Adobe Collective, Gabriella Evaro and Myself with The Desert Dogs.   I am a true fan of both the other artists playing.  For me these are special shows.  I get to play with guys that recorded with me or that have done ‘Full Band’ shows with me.   The Desert Dogs are Chris Unck, Damian Lester and Caleb Winn.”

Shelley: “Venues where music and art is part of the core…  That music is the or at least a key part of the venue’s culture.   Some places can’t decide… are they a sports bar or a music club?  The ones that know usually have the best atmosphere and audiences.”

Shelley: “I would say the most important moment was simply starting again in 2014.  Having Phil (Lacombe) book that first show at Schmidy’s in the fall that year was a big deal for me.  There have been some very important moments since then…. But without that first one… nothing would have happened.”

Shelley: “For me success is playing my own songs, and being my own person.  Completing a record is an accomplishment and in a way something of a success.  Lots of recordings never attain massive commercial success, but recording my own songs and playing what I love is success for me.”

Shelley: “Well that is a long list: Steve Earle, Led Zeppelin, Lucinda Williams, Elvis Costello, etc. etc.  Mostly I am influenced by my friends; what they are listening to, or reading.  Those conversations make me ponder things or search out music to listen to. Three artists that really reignited my wanting to play are Travis Meadows, Tony Marsico, and Chris Unck.”

Shelley: “That’s a funny question… one only need to dream.  That’s a longer list!”

Shelley: “I respect the side men and side women that really make music special.  I couldn’t have made my records without great musicians lending their talent and skills to the process.

Also, I respect the music catalysts out there. Promoters, sometimes artists themselves, that build events for fun or for social community causes.  People like you and Phil, Josh Heinz, Lisa Lynn Morgan, Teddy Quinn, Barnett English.”

CVW: How do you feel the music in the desert has changed since you first started playing here years ago?

Shelley: “One difference, there are more places to play.   Music is simply baked into the culture.  There are great young bands and writers of all styles out here.”

Shelley: “’Dead Horse Hollow’ is one I think of as special.  ‘Walking with Ghosts’ is another that I am proud of.”

Shelley: “Most night’s its ‘Highway 99 Bakersfield.’”

Shelley: “My hope is to continue writing and recording.  Music has been my adventure, and this year I plan to tour the east coast and some areas in the south.”