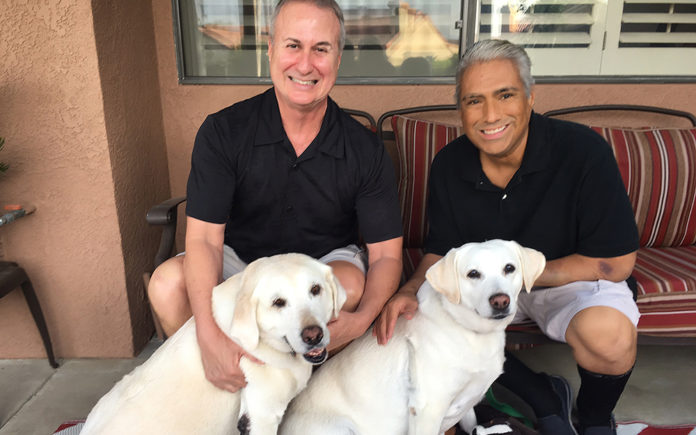 The majestic Labrador dogs are a strikingly beautiful pair as they make the rounds on their morning walk. There is a new spring in 11-year old Sandy’s step since 9-year-old Sally joined the family in July. Jeff Cosmos and Eric Jurado became concerned during the past year as Sandy began to slow down and showed signs of advancing age.

Jeff diligently followed the website for “Labrador Rescuers of San Diego,” a private animal welfare organization where they adopted Sandy 6 years ago. Jeff recalls, “I am Facebook friends with this Lab Rescue group, and I kept seeing the beautiful face of a dog named Sally week after week. I realized no one was adopting her, and guessed it was because she was a senior dog. She was at a foster home in Chino, not too far from here, and we contacted them to arrange a visit. Our dog Sandy accompanied us on the trip, and it was a beautiful sight when she immediately bonded with Sally.”

Eric was not initially convinced about taking on the responsibility of owning a second large dog. He recalls, “That all changed when we met Sally at her foster home. She happily wagged her tail. She won my heart when she approached me and greeted me with happy kisses.” It sealed the deal when they watched Sandy perk up and show joy in the company of another dog.

The pair is now inseparable, and Sally’s companionship gives Sandy a spring in her step, a renewed interest in life, and she seems years younger. While it’s hard to tell these beautiful “sisters” apart, their personalities could not be more diverse. Sandy is quieter and calm. She was neglected in her previous home, and then attacked by another dog. A neighbor observed Sandy suffering from serious untreated injuries and reported her plight to the authorities. The Lab was confiscated and taken to the county shelter. Fortunately, she was selected by the Lab rescue group who financed a month’s veterinary treatment to heal her wounds. Sandy is still leery of other dogs until she gets to know them.

Sally was relinquished by her family when they told the rescue their 21-year-old daughter was allergic to the dog. The family had Sally since she was a puppy. Lab Rescue discovered Sally had a tumor and took her to their vet for removal. How can someone give up a wonderful dog they’ve had for 9 years when pet allergies can be corrected? At least they did not take their 9-yr-old dog to a public shelter where senior dogs have a slim chance of being adopted. Today, Sally happily greets humans and canines in her Palm Desert community.

Jeff enthusiastically recommends adopting a senior dog, “If you don’t have the patience, the time, or a good size yard for a puppy, the first 3 years they can be a handful. Older dogs are perfect, and they are so grateful for their second chance home.” Senior dogs are almost always house trained and often know some basic obedience commands such as “sit,” “stay,” “come,” and “down.”

Eric adds, “These senior dogs bring us so much happiness. They make me smile every day. If you’re sick, they are right there to comfort you. I was recently ill, and both dogs seemed to know, and they laid down next to me and put their paws on me. Sandy puts her paw on me when it’s 4:00 pm dinner time. Sally dutifully follows Sandy throughout the house carrying one of her favorite stuffed toys.” Senior dogs teach us to appreciate life’s small joys, to live in the moment with love, and to forgive the past.

Did you know there are hundreds of private specific breed rescue organizations throughout the United States? They specialize in socializing and finding homes for animals they rescue from public kill shelters and homes where they are abandoned or neglected. Save a life, and avoid spending thousands of dollars at a pet store or breeder for a dog. Locate them on www.petfinder.org or google the breed you seek followed by the words “Rescue Southern California”. You can locate Labrador Rescue of San Diego on their website www.labrescuers.org and find wonderful dogs like Sandy and Sally.