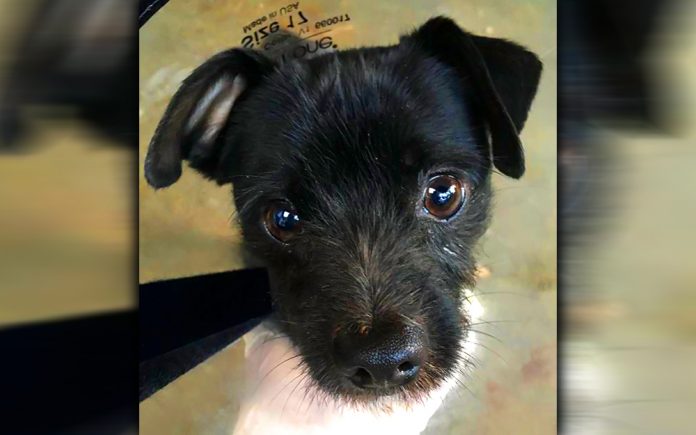 Running to her car tightly clutching the injured puppy, Erin Duffy could only think about getting him veterinary care for his obvious suffering.  A horse trainer, Erin was attending a show at the Thermal Desert Horse Park when her client, Dorothy Atwood, spotted the stray black dog in a nearby field.

Erin recalls, “The dog was very frightened, and it took me two hours to catch him.  I got some turkey and threw pieces of it in his direction.  I moved slowly sideways toward him.  He had gaping wounds on his rear hip area and was unable to run anymore.  When the lasso I made from a leash missed, I knew I had to act quickly.  I grabbed him and held on tightly.  I felt his body surrender.  He was malnourished, his bones protruded from his thin little body, and he was breathing hard.  We worried he might not make it.  The emergency hospital veterinarian thought he’d been hit by a BB gun.  However, in the middle of the night he called me to say he now believed the puppy suffered from ‘animal grab’ bites, and was now in severe pain with a serious infection.  The vet surgically cleaned out the wounds and put in drains.”

The dog spent several days at the vet hospital.  Erin came to visit, and the pup could barely lift up his head to thankfully greet her.  But he pulled through like a “trooper” earning his name.  Erin and Dorothy both lived out of town with a full house of pets.  Their next question was:  Was there a local rescue organization that could take Trouper and provide his follow up veterinary care?  He needed his drains removed and his wounds checked.  He needed vaccinating and neutering.  And he needed a forever loving home.  Erin found Loving All Animals online, and they said “YES” to providing the care Trouper needed to prepare for an adoptive home.

Soon another miracle revealed itself for Trouper when prospective adopters Johnna Young and Jill Reynolds came to meet and adopt him. Dog experienced, they patiently worked with the once traumatized dog to heal his body and his heart.  Now named Oliver, the dog initially guarded against all visitors.  A dog trainer suspected the 1-yr-old Terrier was abused in his previous home.

Johnna reports, “We got to bring him to a happy place.  Oliver is fun and loving, and full of joy that can’t be contained.  Today he runs like the wind with doggie exuberance.  He has a huge back yard in our second home in Oregon.  He went on his first beach trip, and ran in happy amazement along the ocean.  He loves other dogs, and enjoys walks with my parents’ Shepherd mix, Zoey.”

Many stray and injured animals roam our Coachella Valley.  Some were previously in neglectful or abusive homes.  Many received no prior vet care. Saving Trouper – today a healthy, happy, and loved companion – reminds us that homeless animals deserve a second chance.  It’s up to all of us to make that happen.  Will you help?

Maybe you will never find a stray injured dog, or come across an abandoned litter of kittens in the cold winter.  But that doesn’t mean you can’t be part of a life-saving miracle.  Maybe you can adopt a shelter animal?  Or foster?  Or volunteer to walk dogs or transport?  You can be part of many life-saving miracles when you donate to Loving All Animals, the wonderful organization I work with.

Trouper was just one of the 274 dogs rescued, vetted, and rehomed by Loving All Animals in 2019.  They also rescued and adopted 29 cats and 1 bird last year.  Your generous tax deductible donation creates more “second chance” happy endings for deserving animals like Trouper.  You can donate online at www.lovingallanimals.org, or mail a check to 83496 Avenue 51, Coachella, CA 92236.  Please mention the reason for your donation is “Trouper”.