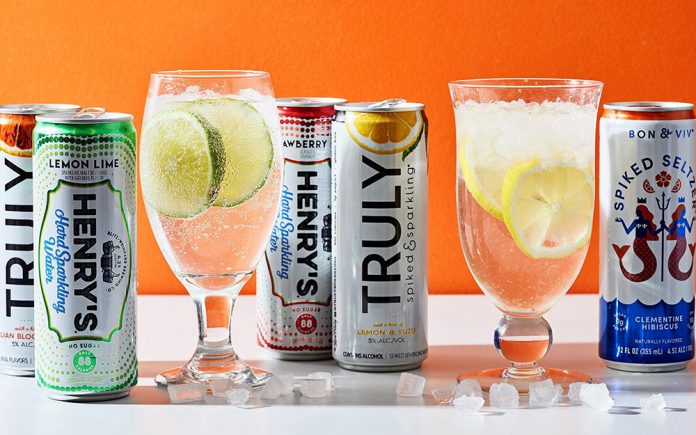 We’ve been covering some of the seltzer news during the past year as their sales continue to climb.  And in this pandemic year—who would have thunk—seltzer sales have skyrocketed.

For the one-week period ending this past June 6th, spirits continued to grow well ahead of other alcohol categories with a 30.2% sales increase. Wine increased by 23.8%, while beer, FMB (flavoured malt beverages) and cider were up by 22.1%.

But over that same one week period, Hard seltzers (alcoholic sparkling water) grew over 255%! It’s the third week in a row where hard seltzers accounted for more than 10% of the total adult beverage market.

Still customers in the liquor department always seem to have questions about what a Hard seltzer is all about.

Hard seltzer is basically alcoholic flavored water. What that alcohol is made from can differ. In most cases the alcohol in “spiked” seltzer comes from fermented cane sugar, with the addition of flavors and carbonation, making many on the market gluten-free. Alcohol in a hard seltzer can also be produced from other grains, in which case it’s described as a “flavored malt beverage”.

“The rise of hard seltzers shows there was a segment of consumers underserved by the current beverage alcohol market who were looking for alternatives that were refreshing and flavourful, but also low-calorie and low-sugar,” said Brandy Rand, COO of the Americas at IWSR Drinks Market Analysis.

“These products also meet the growing consumer demand for convenience, and appeal to people that enjoy popular cocktails like the vodka soda, and wine spritzers. We definitely expect to see more brands taking advantage of this fast-growing trend.”

Sales in the hard seltzer category in the US hit $2.7 billion last year. Overall, the US hard seltzer market is expected to reach $2.5 billion by 2021.  And again in this pandemic 2020 year, many big beer brands have chosen to take on the seltzer market, including Molson Coors, Corona and Budweiser.

After a long period of growth, there has been a general decline in consumption of wine in the US. So it’s good timing for this new Hard Seltzer market in providing the opportunity for lower alcohol beverages. The appeal of hard seltzer, it says, is being driven by the fact they are lower in alcohol and calories, combined with an increasingly health conscious market, and the fact they come packaged in “insta-friendly” and sustainable cans.

According to research published last year, over half of US alcohol consumers drink hard seltzers at least once a week, with analysts describing the rise of hard seltzer as “meteoric” and “phenomenal”. To put it into perspective, the current volume of hard seltzer produced in the US, is currently about 82.5 million nine-litre cases in the US— larger than vodka!

Without debate, it’s a category that demands attention. Unfortunately, I’m not a big fan of the stuff.  Like the lyrics to the song, “I get no kick from Champagne”—well, I get no kick from Hard seltzer.  But what do I know in the billion dollar scheme of things?

According to the folks I respect, Henry’s Hard Sparkling Water is one of the better brands, at only 88 calories per can, this sugar-free, low-carb option packs a respectable 4.2% ABV per serving, and it comes in “yummy” flavors such as Lemon Lime, Passion Fruit, and Strawberry Kiwi.

The ever-popular White Claw is a flavored malt beverage (FMB). It’s made with a blend of seltzer water, its gluten-free alcohol base, and a hint of fruit flavor. The alcohol in White Claw Hard Seltzer comes from “fermented sugars derived from malted gluten-free grains.” Whatever that means, it’s made with cane sugar, which is listed as an ingredient in several variants. In 2019, Americans drank over $212 million worth of White Claw, more than the entirety of 2018.

White Claw comes in nine fruit flavors such as Mango, Natural Lime, Black Cherry, Ruby Grapefruit and Raspberry. It also just launched a “pure” or unflavored version, though White Claw claims it to be a limited-edition offering.

The other major player of the hard seltzer market is Truly, owned by Boston Beer Company, the parent company of Sam Adams. It’s second only to White Claw in terms of sales and offers 13 different styles that include a variety of berry, citrus and tropical fruit options. All are made with no artificial flavors or sweeteners.

Even with its most recent launch in January 2020, Bud Light Seltzer already holds a spot as the third biggest seltzer in the U.S. One can has 100 calories, 2g of carbs and 5% alcohol and is available in four flavors: Black Cherry, Lemon Lime, Strawberry, and Mango.

Natural Ice has launched its own version, Natural Light Seltzer, along with Pabst Blue Ribbon with its Stronger Seltzer. So far, Arctic Summer it’s the only hard seltzer actually made by a traditional seltzer company.  Cheers everyone!