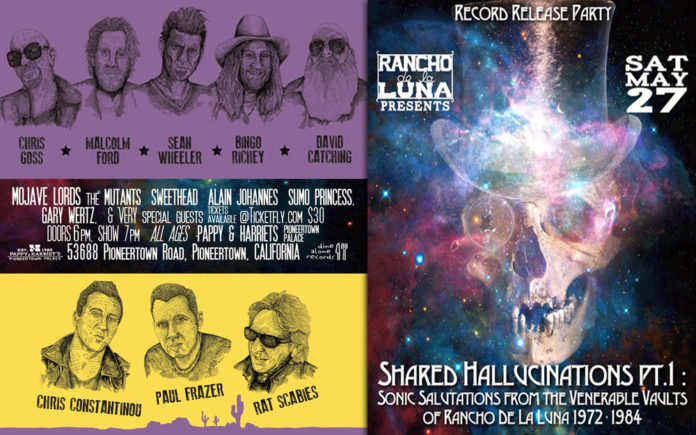 At Pappy & Harriet’s on Saturday, May 27

On Saturday, May 27, Pappy & Harriet’s is hosting another amazing show. This show features an all-star group of desert musicians and other world class acts. Shared Hallucinations Pt. 1 has one of the best bills we’ve seen in a long time. Mojave Lords, The Mutants, Sweethead, Alain Johannes, Sumo Princess, and Gary Wertz are all slated to play. Dave Catching from Eagles Of Death Metal will also be celebrating his solo record release. To end the night, there will be some “very special guests.” With the caliber of musicians playing, this could mean anyone from members of Queens Of The Stone Age to members of The Dandy Warhols.

Mojave Lords is a Joshua Tree based band launched by Dave Catching and Bingo Richey. After years of recording with legendary bands at Rancho De La Luna, they decided it was time to team up for a record. Their album Unfuckwithable features Brian O’Connor, Barret Martin, Chris Goss, Joey Castillo, and Danny Frankel. If any of those names sound familiar, it’s because these are musicians who have been a part of some of your favorite bands. These guys have played with Eagles Of Death Metal, Queens Of The Stone Age, Screaming Trees, and UNKLE, just to name a few.

Alain Johannes is another great set to grace the stage. Alain has been a part of plenty of bands. He’s played with Queens Of The Stone Age, Them Crooked Vultures, Arctic Monkeys, Mark Lanegan, Puscifer, PJ Harvey, and the late, great Chris Cornell. His solo albums are absolutely amazing. He released Spark in 2010 to critical acclaim, and in 2014, he released Fragments and Wholes, Vol.1. His set will be an emotional rollercoaster.

Sweethead, Sumo Princess, and Gary Wertz are also stand out acts. Sweethead is a band started by Troy Van Leeuwen (QOTSA, A Perfect Circle, Iggy Pop) and Serrina Sims. Sumo Princess is a two piece band from L.A. Gene Trautmann plays drums, and Abby Travis plays bass and sings. You may know Abby Travis from playing bass with Beck and The Go-Go’s. Or perhaps you recognized her name from playing and singing on KMFDM’s arguably best album, Symbols. (Yes, in the middle of all of these amazing rock bands, there is a musician who has played in KMFDM, an industrial power house.) Gary Wertz is perhaps the outcast in this line up. While he doesn’t quite fit within the “desert rock” genre, he is a perfect fit with this eclectic group of musicians. The music is self-described as, “The Kinks filtered through Waylon Jennings.” If that doesn’t illicit a listen, I don’t know what would. I beg of you to give it a listen.

Lastly, perhaps the most exciting band of the evening; The Mutants, will be playing and bringing up a ton of guests who helped them record their latest album, Your Desert, My Mind, at Rancho De La Luna. The Mutants are Chris Constantinou of Adam Ant, Rat Scabies of The Damned, and Paul Frazer, AKA Space of Black Futures. The Mutants started when Chris and Space wanted to reunite some of the greatest artists of the Seventies and Early Eighties new wave and punk. In 2014, they released The Rhythm and Punk Review. This album was recorded in London and featured guests Wayne Kramer (MC5), Neville Staple (The Specials), Jonathan Read (The Specials), and Texas Terri, just to name a few. Next they traveled to Chernobyl and recorded Nuclear Wasteland. Then it was off to Japan to record in Tokyo. There, they recorded Tokyo Nights with local musicians from the bands Guitar Wolf, The 5,6,7,8’s, The Neatbeats, Jackie & The Cedrics, and Mika Bomb.

The Mutants finally found their way to the California desert to record. They set up shop in Joshua Tree at Rancho De La Luna and recorded Your Desert, My Mind, which was put out by Killer Tracks. Staying true to their past, they included plenty of desert legends. Recording at Rancho De La Luna gave them access to the talents of Dave Catching, Chris Goss, Bingo Richey, Peter Holmström and Zia McCabe of The Dandy Warhols, and master lyricist Sean Wheeler. CV Weekly had the opportunity to interview Chris Constantinou about the history of The Mutants and the upcoming shows.

Coachella Valley Weekly: Was the plan always to record an album in a different region with an all-star line-up of local musicians?

Chris Constantinou: “Sort of yes. It started as a way to reunite so often overlooked musicians we loved. We also wanted to be inspired by our environment.”

CVW: How do you get in touch with all of the amazing musicians who guest on your albums? Are they friends of yours, or is there sort of an open call for musicians?

CC: “Between myself, Eugene at VIVE LE ROCK magazine, Dave, and Rat, we managed to get hold of all the people and some were just flukes … just happened… right time … right place … sort of thing.”

CVW: Your Desert My Mind features a ton of desert legends. Was it a natural progression to record at Rancho De La Luna and get Dave Catching, Chris Goss, and Sean Wheeler among others?

CC: “We decided to write and record the album basic backing tracks in 2 days in Raezor Studios (now sugarcane) in Wandsworth London, so we turned up and jammed a bit and thought maybe this wasn’t such a good idea to have no songs and just experiment. So we went to the pub. Then a massive, great, black rat runs under the table and we thought it was a sign. We went back to studio and thank god it started to happen. Then we sent tracks to our wish list in the desert. Dave Catching and Chris Goss helped us a lot with finding people. Others just walked into the studio at the right time… The Dandy Warhols had a day off so they came and jammed on the album. Then we had a party at Pappy & Harriet’s and Zia did a DJ set. It was so much fun. So… yeah, the rest of the album was made at Rancho.”

CVW: There is a natural desert music vibe on the album. It truly sounds like you, Paul Frazer, and Rat Scabies were raised here on that album. Was it fairly easy to fall into that style? I’ve always wanted to know if the sound is as distinct to musicians from other regions. Even non-“stoner” desert bands have a distinct desert vibe in my opinion.

CC: “We just decided to do it better than the original stoners! Ha ha…just joking. It was very natural and organic. Some songs are a result of one jam… one take… particularly from the vocalists end. The desert guys really impressed me… so, so talented and quick.”

CVW: This will be the second show at Pappy and Harriet’s. Do you enjoy playing there? It truly seems like a magical venue.

CC: “It is magical. I really love the place. I want to move in… and to the Inn as well!”

CVW: What is the future of The Mutants? What region will you tackle next? Africa?

CC: “We are talking about the 4th album now. A few label offers have come in. We’ve vaguely discussed making it in a Castle in Bavaria, Germany… someone Rat knows’ place, but we’re not sure yet. I’m looking forward to that.”

Your Desert, My Mind was released by Killer Tracks, which is known as a source for songs for television, film, advertising, and interactive media. You can buy the album on iTunes, but the only way to get a physical copy is to go to the show. If you make it to Punk Rock Bowling, be sure to catch The Mutants and Throw Rag open for The Sonics on Thursday, May 25.