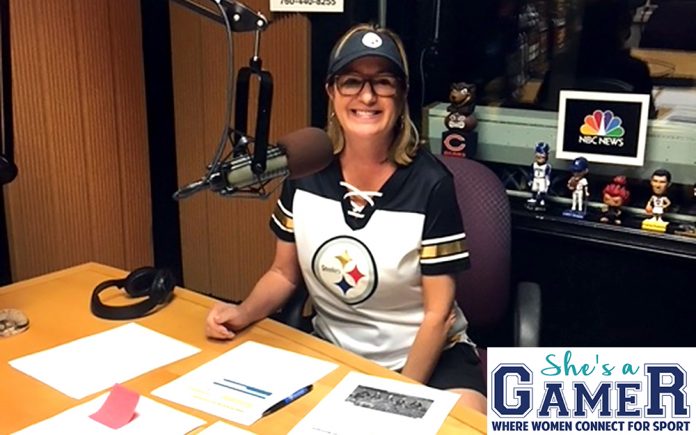 You survived the Holidays! Congratulations…but did you survive the office pool? Maybe you were left out of those water cooler conversations and high-fives because you didn’t know what they were talking about. Perhaps, you told yourself at a party where the focus was on Bowl Games- College Football Bowl Games or on NFL Playoffs (I’m still crying for the Saints), that this would be the year that you learned more about football but you didn’t know where to begin. It seems like everyone around you knows the game, the rules, the latest controversies and who’s favored to win. Yet, somehow, you are still standing on the sidelines, waiting to participate and maybe, too embarrassed to raise your hand and say- I have no idea what’s going on with this game. You’re in luck! Santa knows what you need. Check your stocking, there is something you overlooked. There it is- a road map to She’s A Gamer with Cristina Walters on Team 1010 KXPS Sportsradio, a show dedicated to helping women (and men) elevate their passion and knowledge for football and sports of all seasons.

“This is not a show about women athletes, it’s a show about sports with a focus on giving women a voice that is inclusive and accessible but fun. I want to remove the intimidation of talking about sports and educate women- or anyone- who doesn’t want to feel stupid or left out of the conversation around sports,” says the show’s creator, Cristina Walters. She is an avid UCLA Bruins fan but keeps her birth rite, the Oregon Ducks, close to her heart. (She picked the Ducks to win the Rose Bowl on January 1st). Her passion for sports shines through in her other business as well, Champion Gems, an unrivaled line of fine jewelry pieces meticulously created in the spirit of those who staunchly support their teams and alma maters.

Her sports radio show even addresses important matters of sports psychology like- what do couples do when football season begins if one half of the couple is not interested in the game?

“There are a lot of relational dynamics for men and women when it comes to sports. It’s not just about a couple that might feel the strain of the season but also seeing the opportunity to share a passion together. It’s a great way for parents to get closer to their kids who have an interest in sports that they may lack and have difficulty relating to them,” encourages Walters. She has hosted other moms on the show, like NFL player Zach Ertz’s (Philadelphia Eagles Tight End) mom, to discuss concerns around player safety works tirelessly to bring a format to air that encourages when to gain the knowledge and confidence to participate in the conversation.

Walters is set to hold one of her fabled “Training Camps” at Miramonte Indian Wells Resort and Spa on January 30th for “Super Bowl 101,” a fun “watch, talk and teach” method to learn how you can put together a playbook to understand Football 101 and be part of the fandom that surrounds sports and the upcoming Super Bowl! “Miramonte has been great! The venue helps with the social aspects of sports and can be a great way to make friends and business contacts that is more fun than a Chamber mixer!” proclaims Ms. Walters. For more info and sports 101 guidebooks, go to: www.ShesaGamer.com.