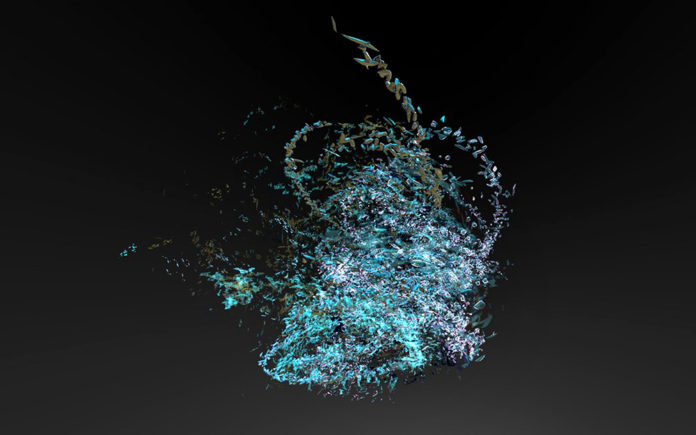 We are very much a wireless wired world. Clearly that is evident in Desert X‘s Margin Of Error and Revolutions by Nancy Baker Cahill. Both of these installations may only be experienced through a smartphone app.

Nancy Baker Cahill received her B.A. from Williams College and began her career describing TV and movies for the blind and visually impaired at WGBH in Boston.

She is very much a part of the art and technology relationship. She is the founder of 4th Wall, a free Augmented Reality (AR) app that invites viewers to place art in 360 degrees anywhere in the world. This new approach to art in public places puts the viewer a virtual reality.

In her artist statement Cahill wrote that by “using media including drawing, video, virtual reality (VR), augmented reality (AR), and original sound, I attempt to isolate simultaneous moments of exertion, violence, defiance, and stillness in my graphite and digital mark-making. I am equally interested in power dynamics and how they shift, strain and contract. On paper and in virtual space, my process is deeply physical. My hope is that this energy is present in the experience of the work.”

She further stated “(A)ccess to art is essential to me. My goal with all of my projects is to offer unexpected perspectives to new audiences that in turn provoke conversation and affect a broader cultural dialogue.”

Revolutions and Margin of Error do achieve these goals. Once the awe of virtual reality passes, the viewer is exposed to how progress may impact any ecosystem for good or for bad. Progress takes something away from the environment and replaces it with something else. It is when those action merge, does the full impact of the work becomes its own reality.

Revolutions is viewed from the wind farm located near Tipton Road and Highway 111 in Palm Springs. The installation was originally located near North Indian Canyon Drive, but, almost as if Nature was working with Cahill, the recent flooding caused the move.

Revolutions is about a disruption. The disruption of the natural landscape by the windmills is further disrupted by the animated digitally rendered mechanical garden. Cahill’s cacophony however provides no permanent impact to the vista. It adds to the disruption while not contributing. No environmental impact, save for the impact of the visitor to the location, is created. The installation, according the artist, highlights how our need for energy has negatively impacted on the ecosystem.

The second installation is located at the North Shore Yacht Club at the Slaton Sea. Margin of Error highlights the strange ecosystem that is the Salton Sea. An area of great beauty and greater toxicity, the Salton Sea was created by human error and has consequences that have fully been realized. While the Yacht Club once had its members the location is a reminder of what may happen when man interferes

Cahill is part of growing number of female artists working in virtual reality and land art. What is Land art? It is an art movement that may have its route in Stonehenge but is commonly referred to an environmental movement that emerged in the 1960s with artists such as James Turrell creating large-scale, site-specific outdoor works using boulders, soil and surrounding vegetation set off by the sky and lines of the horizon. The movement was a rejection of the commercialization of art and fell in to the paradigm of the ecological awareness of the 60’s. The works were often inaccessible and relied on photography to bring the work to the dreaded urban centers.

Cahill has taken the concept of Land Art and brought it into the digital world. Her approach has far less negative impact than the earthmoving work of Turrell but her impact is no less powerful.  Revolutions and Margin of Error are works that deserve to be seen multiple times. Each viewing brings another layer to the consciousness and cements the genius of Cahill.