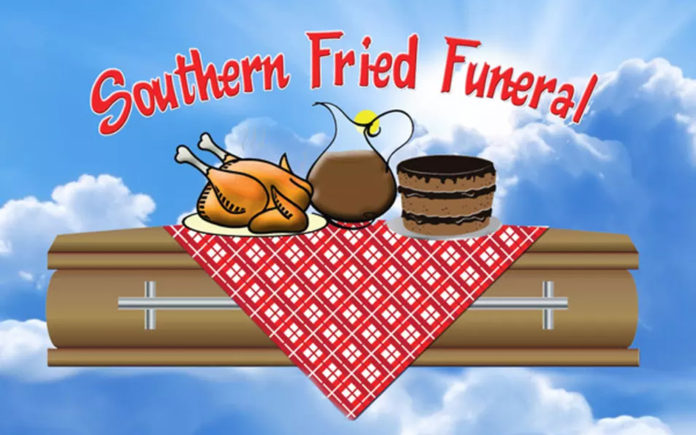 Comedy is an art form.  Wit, humor and pranking can inspire as many unique reactions as there are audience members.  But one thing that can be universally recognized is a solid performance in the midst of silliness and over the top characters.  J. Dietz Osborne and Nate Eppler’s homespun comedy, “Southern Fried Funeral,” is currently serving up some family drama and a whole lot of laughs on the Desert Theatreworks stage, at the Indio Performing Arts Center.

Pillar of the community Dewey Frye, is dead.  In the middle of yet another do-good community service event, he drops face first into the mashed potatoes.  The loss of a family patriarch can bring out the best and worst in a family and Dewey’s untimely demise gives us the chance to peak in the window and watch his family and friends reveal the best and worst of who they are.  Most activities in the south involve sharing food.  But there is nothing like a funeral to get every one in the community to dig out their one surefire recipe and bring southern comfort to the grieving family. 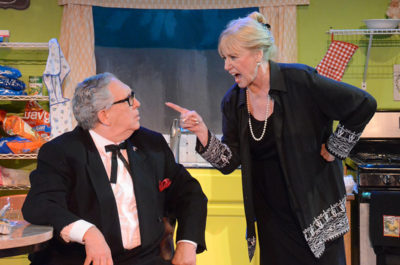 Dewy’s wife, Dorothy is the rock in this family.  And Shirley Le Master’s performance in this role is the foundation of the whole story. It’s easy in a comedy to take things over the top, but Le Master’s presentation of this grieving matriarch is as real and honest as it comes.  Knowing how to play comedy with the right balance of authenticity is an art and this actress possesses that skill in spades.

Dewy and Dorothy’s adult daughters, Sammy Jo (Heidi Hapner) and Harlene (Daniela Ryan) have been rivals since childhood and are about to kill each other within days of their daddy dropping dead.  Ryan is listed in the program as a ‘natural actor’ and it’s certainly true. Whether it’s adding humor to a dramatic role or a layer of drama to comedy, she plays her character with an earnestness that always seems to deliver a standout performance.

David Brooks, as Attorney Atticus Van Leer, Harlene’s on again/off again love interest is so much fun to watch.  Brooks gives an honest and sincere performance that actually makes lawyers look likable.  Stan Jenson with his comical toupee’ and suspenders stretched over a barrel belly is a kick to watch, Stacy Casaluci-Grenrock as Martha Ann Fox and Patricia West Del-Ruth as Fairy June Cooper, gave subtle stand-out  performances that prove there are no small roles.

I loved Lance Phillips-Martinez’s direction and set design.  It isn’t always easy to keep the blocking and action in a single set, two act play from feeling redundant and stagnant.  But Phillips-Martinez manages this feat with style.  Bravo to Michelle Mendoza and her costumes.  Her choices were spot on for each role.

Southern characters can be comical just by virtue of their culture.  Southern names, such as Sammy Jo, Fairy June, Harlene and Dewey can inspire chuckles all by themselves.  The script for ‘Southern Fried Funeral,’ is a bit campy, stereotypical and predictable.  But I admit the show had my attention from curtain up until curtain down. This ensemble of family and friends were a bit like watching a car wreck that you just couldn’t look away from.

And Congratulations to Desert Theatreworks on their 39 Desert Star award nominations.

This show is recommended for family members of all ages and can be seen through September 23rd, at The Indio Performing Arts Center, located at 45175 Fargo Street, Indio, CA.