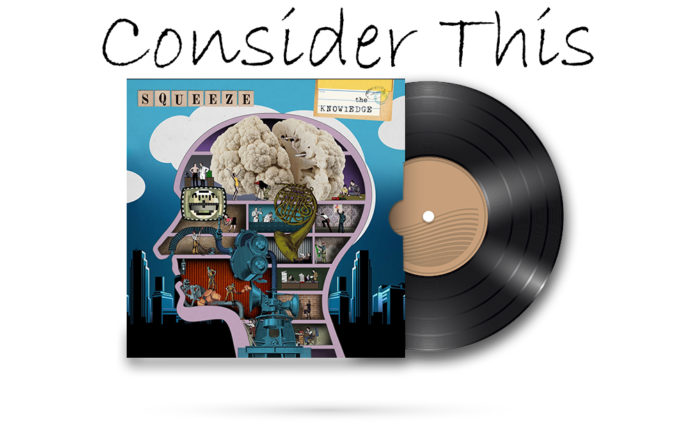 The British band Squeeze began with an act of larceny. Back in 1973, Chris Difford swiped 50 quid from his mother’s purse, placing advert in a Depford sweet shop, seeking a guitarist for his (so far, imaginary) band. The only person that responded was Glenn Tilbrook. The pair began writing songs together. As their ambitions grew, so did their band, with the addition of drummer Paul Gunn, bassist Harry Kakouli and Jools Holland on keys.

The nascent five-piece rotated through a series of monikers before settling on Squeeze, a reference to an obscure, (post-Lou Reed) Velvet Underground record. Playing local clubs and pubs in Depford, they shared stages with other up-and-coming acts like Alternative TV and Dire Straits. When Paul Gunn left they recruited powerhouse Gilson Lavis to pound the kit, and their sound really coalesced.

In 1977, the year Punk Rock exploded in Great Britain, Squeeze signed with A&M Records. In a weird bit of serendipity, the label assigned ex-Velvet Underground founder John Cale to produce their debut. Inexplicably, he wanted to title the record “Gay Guys.” Pretty quickly, the band realized they weren’t on the same page as Cale. A&M agreed and actually had Squeeze return to the recording studio and re-produce some tracks themselves.

When their self-titled debut arrived in 1978, the break-out songs turned out to be the ones that Squeeze had produced. The record was a minor hit and things only got better from there.

On their sophomore effort, 1979’s Cool For Cats, Chris and Glenn’s songwriting made enormous strides. Tracks Like “Goodbye Girl,” “Up The Junction” and the title track combined irresistible melodies with intricate yet economical storytelling that led the music press to dub the duo the Lennon & McCartney the Post Punk/New Wave set.

That kind of extravagant praise put a bit of pressure on the Depford lads, but Chris and Glenn rose to the challenge. Their next two records, 1980’s Argy Bargy and 1981’s East Side Story doubled down on their formula of pithy Lennon-esque lyrics and sunshiny McCartneyesque melodies. East Side… was exceptionally sagacious, a melodic masterpiece. It moved out of their Power Pop/Post Punk comfort zone, exploring a plethora of styles, from Country to Psychedelia to Pub Rock, Rockabilly and Baroque Pop. Boasting production from Elvis Costello, (a protean songwriter in his own right), the album even yielded a Top 10 stateside hit with the soulful “Tempted.”

By 1982, the constant treadmill of writing, recording and touring began to take its toll. The wear and tear showed on their fifth long-player, Sweets From A Stranger. Although it produced another hit, the trenchant romantic post-mortem, “Black Coffee,” it was clear that the band was fraying at the edges. By the end of the year they called it quits, releasing a greatest hits compilation, Singles, 45s and Under and made a final TV appearance as the musical guests on “Saturday Night Live.”

Even though the band had ceased to exist, the team of Difford & Tilbrook remained very much intact. In 1984 the duo released a self-titled debut that smothered some excellent Songs beneath lukewarm (synth-y) instrumentation. It was a noble experiment, but ultimately unsatisfactory. Luckily, it opened the door to the possibility of a Squeeze reunion.

By 1985 the band was back with Cosi Fan Tutti-Fruiti, (a smartass take on the title of a Mozart/Da Ponte opera). It was a charming effort, but their next album, Hourglass was a genuine American hit, peaking at #15 on the charts. Squeeze closed out the ‘80s with another winner, concisely entitled “Frank.”

During the next decade, the band continued to create solid but not spectacular records like 1991’s Play, 1993’s Some Fantastic Place, 1996’s Ridiculous, and 1999’s Domino. By the 21st century it felt as though Squeeze was in the rearview mirror. Chris Difford and Glenn Tilbrook were each concentrating on solo careers. The former wrote and recorded four solo albums, the latter crafted six.

It was a happy surprise when the band reconvened in 2007 to tour in support of two new hits compilations. They stayed out on the road for the next few years. They even re-recorded some old Squeeze favorites, challenging fans to “Spot The Difference.” These days, touring pays the bills for working musicians. But the danger of sticking strictly to the hits can sometimes, (unfairly), consign viable acts to an “Oldies” status.

Difford and Tilbrook had been close to creating new music, but nothing came to fruition until the BBC approached them with the idea of writing eight songs to accompany their limited series, “Cradle To Grave.” Based on comedian Danny Baker’s “Going To Sea In A Sieve” autobiography, the action takes place in London circa 1974. Of course, Chris and Glenn came of age in that era of flared trousers and shag haircuts, so their participation seemed wholly apropos.

Released in late 2015, Cradle To Grave, was an astonishing return to form, it included 12 songs and netted the band rave reviews. It was also debuted at #12 on the charts, marking their first Top 40 album in 22 years. Buoyed by their artistic and commercial success, and following the requisite World tours, the band headed back into the studio and the result is their 15th long-player, The Knowledge.

The album opens with the one-two punch of “Innocence In Paradise” and “Patchouli.” “Innocence…” rumbles to life with some uncharacteristic Stadium Rock-ish guitar, thundering drums and rattlesnake shake percussion, before downshifting into a mid-tempo groove. Soul-searching lyrics explore the cynical disconnect that accompanies the advance of age; “The expectancy of old age as the journey nears home, disbelieving my reflection knowing that I’m on my own/On this road that keeps on winding, knowing that it won’t be long, until the final destination holds my hand and leads me on.”

Countrified guitar licks and soaring pedal steel are tethered to a galloping gait on “Patchouli.” Here a waft of the quintessential Hippie scent transports a middle-aged malcontent back to the halcyon days of his youth, and he recalls a lost love; “Some days I wonder what you’re doing and where your life has taken you/We were teenagers inspired, undying love was all we knew.”

Squeeze has always excelled at juxtaposing rich narratives that offer a snapshot of British working class life, with incandescent melodies. But Chris and Glenn’s songs have rarely touched on Political or current events, until now. Several songs here make it clear that current climate of divisiveness has deeply affected the band.

“A&E” is not an homage to the television network that began broadcast life championing arts and entertainment and currently features umm, sophisticating fare like “Dog The Bounty Hunter,” “Storage Wars” and “Duck Dynasty.” Rather, in Great Britain, the “A&E” refers to a hospital’s emergency room. The stately arrangement weds soulful, Stax-flavored horns lapping over a torchy supper club melody. The lyrics tackle the ongoing debate involving affordable healthcare as well as equitable compensation for professionals who offer compassion and skill. “I took my wife to the A&E it took all night just to be seen, she broke her leg and was in pain, the nurses looked completely drained/but nice as pie and so composed, how do they cope it’s hard to know with violent men that hurl abuse, a daily battle they never lose.”

The breezy melody of “The Ones” nearly camouflages A sharp rebuke of the man-baby that currently occupies the White House. Lush organ notes swirl around Wurlitzer colors and phased guitar. Deftly turned phrases like “There’s facts and there are fables and they speak for themselves, the ‘fake news’ keeps on coming poisoning the well,” leave no doubt that Squeeze distrust the carnival huckster-in chief as much as (most) Americans do.

“Final Score” feels ripped from the headlines. The Jazzy melody is anchored by supple piano runs and bittersweet pedal steel. A young football prodigy is targeted by a pedophilic coach. “The Coach sat him down in the corner, said that one day you could play for Manchester United or Arsenal, but you must do what I say.” It’s a testament to Chris and Glenn’s songwriting skills that the lyrics manage empathy for both the victim and the predator who receives swift comeuppance.

The most winning tracks here are “Every Story,” “Please Be Upstanding” and “Albatross.” Each mines a different musical genre that edges Squeeze away from their familiar Power Pop style. “Every Story” opens with a concertina wheeze that leans closer to French Café continental rather than British working class.

Plonky celeste, twinkly percussion and Indian Harmonium add to the globe-trotting flavor. Ironically, the lyrics stick close to home, examining the everyday lives of a close-knit community where “the reality of Monday isn’t so much fun, every story has a twist…where walls have ears and gossip has feet/Where relatives and friends are near, you could do much worse than being here.”

The prickly “Please…” blends stuttering guitars, whoosh synths, pulsating percussion and swooping pedal steel. The lyrics present a comic take on the softer side of 60. Sharing this deflated discovery, “My manhood took a silent blow.”

Finally “Albatross” paints a vivid portrait of a very specific form of Homo-sapien, the aging record-collector/hipster Thick bramble-y guitars connect with a bongo-riffic backbeat. Laugh out loud details manage to simultaneously take the piss and sympathize with an anachronistic geezer who “Vapes outside the vinyl store and steps inside, to comb the crates for rarities It’s his delight…” As guitar, celeste, finger cymbals, omnichord and handclaps ramp up to a sabre dance velocity, this sad-sack with the droopy tattoos still pines for the Peter Green era of Fleetwood Mac. (Roughly 50 years ago).

Throughout the years, Squeeze has endured myriad line-up changes, even as the partnership of Chris Difford and Glenn Tilbrook remained solid. These days the septet includes Steve Smith on percussion, drummer Simon Hanson, Yolanda Charles on bass and Stephen Large on keys.

No one could have predicted that purloined pound notes would launch one of the most consistently wonderful bands in British Pop Music. Chris Difford has no doubt reimbursed his Mum, probably a few times over. But it’s a debt that Squeeze fans will never be able to replay.