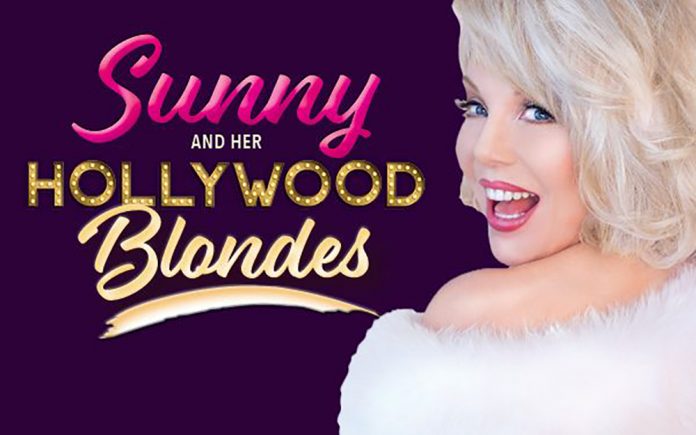 Modernism Week 2020 is quickly approaching, and the Coachella Valley art scene is bursting with special events and spectacles to mark the occasion. One such performance is the showing of Hollywood Blondes, which will be the featured performance during Modernism Week at 7 p.m. on February 16 at the Annenberg Theater in Palm Springs.

The headlining star of the show is Sunny Thompson, who will pay homage to several prominent blonde leading ladies and music stars in show business—with most having lived or visited Palm Springs in the past—such as Mae West, Marilyn Monroe, Dolly Parton, Joan Rivers, Carol Channing, and Dinah Shore.

Sunny Thompson began her career touring in Broadway Revues, even touring Europe as a featured singer, and starred in the hit show Showgirls in Las Vegas and on HBO.

“I was about seven years-old when I realized that I wanted to pursue show business. I remember watching The Tonight Show with my grandpa at that age and seeing the performers on the television. He would tell me, ‘Sonny, that’s going to be you one day!’ And from that moment on, I thought, ‘that’s what I’m going to be,’” recalled Thompson.

Thompson has made a successful career out of portraying one of her main idols and inspirations, Marilyn Monroe, as she starred in the award-winning one-woman play with music, Marilyn Forever Blonde: The Marilyn Monroe Story in Her Own Words and Music, which played all over the world including the West End in London and even in Palm Springs at the Annenberg Theater.

Over the past two years, Thompson was featured in the award-winning documentary film, Becoming Marilyn Monroe, which had its world premiere at the 2018 American Documentary Film Festival in Palm Springs and was brought back in 2019 for two more sold-out performances once again at the Palm Springs Festival.

“I love performing live. I have been lucky to do film and radio, and that’s gratifying, but the live audiences is where I live. The actresses I’m portraying also made it a priority to live on the stage. There was a point two years ago where I spent more time on the stage than in my own living room,” shared Thompson.

Last winter, Thompson was awarded her very own star on Palm Canyon Drive as part of the Palm Springs Walk of Stars right next to the star belonging to Marilyn Monroe.

Thompson cites the serendipitous placement of her star next to Monroe’s as an important accomplishment in her career, and she is also proud of winning the Frank Sinatra Celebrity Golf Tournament 20 years ago at the Desert Willow Golf and Country Club in the Coachella Valley.

Thompson emphasized that the costuming in Hollywood Blondes is elaborate and works to help her fully embody the persona of the icon that she is portraying in the moment. This is especially important, as her costume changes are done very quickly, sometimes in a matter of minutes—from changes in wig, makeup, and accessories as well.

“I love the costumes that I wear in the show. My favorite is the Mae West costume, even though it is uncomfortable to wear. It’s a long black dress with a fur collar that stands up behind my head and ends in a long white train. Very luxurious and classic,” said Thompson.

Those who attend Hollywood Blondes must be 16 and older. Tickets are priced at $55 and $75, which can be purchased online at mordernismweek.com.

“I really think people will enjoy Hollywood Blondes. It is definitely one of my favorite things that I’ve ever done. Being able to perform has always been a gift for me, and I hope I can continue to do that,” shared Thompson.