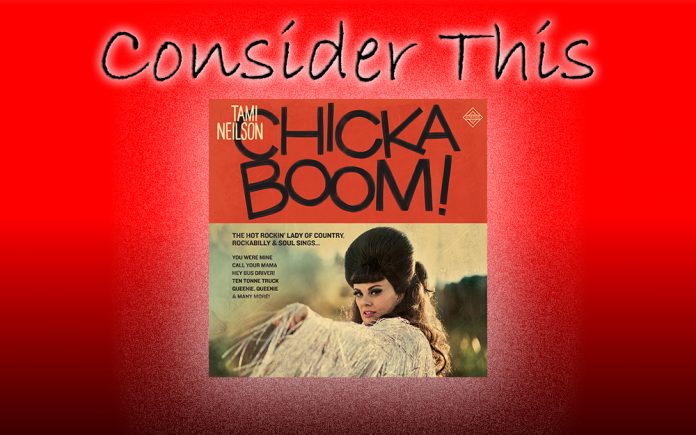 Lately it feels like things are getting horribler (what, it’s a word). Politics are a shit show, there’s a pandemic streaking across China and the rest of the world, Lisa Vanderpump won’t be on this year’s “Real Housewives Of Beverly Hills,” weather patterns are schizophrenic, the Country seems more polarized than ever and The Monkees still haven’t been inducted into the Rock & Roll Hall Of Fame.

If you’re looking for an antidote to the Winter blahs, slap the new Tami Neilson record on the turntable. The Canadian Country-Rockabilly Soul-shouter has just released her seventh album, CHICKABOOM!

Born and raised in Canada, music was Tami’s first language. Along with her parents, Ron and Betty, plus her younger brothers, Joshua (“Jay”) and Todd, they toured Canada and United States as The Neilsons. Crisscrossing North America in their 34-foot motor-home, they performed their own brand of Gospel-flavored Country. They brushed up against legends like Roy Orbison and shared stages with heroes like Loretta Lynn and Johnny Cash.

When the family was strapped for cash they busked in the streets, scraping by on tips and spare change. By the ‘90s, The Neilson Family played state fairs, prisons and music festivals, they consistently appeared on local radio and television shows. They had a Top 20 hit on Canadian Country radio in 1996 with “Windows To The Past.” The follow-up, “We’ll Hold On,” hit the Top 40. Both can be found on their self-titled debut.

As she was trying to get her solo career off the ground, Tami visited New Zealand and fell in love. The long distance romance lasted three years until she emigrated there and got married. Auckland wasn’t exactly a bastion of Country music, but her husband Grant had already established a career in law enforcement there.

Not only did her 2014 effort, Dynamite hit the top of the Kiwi charts and win her another Tui, but garnered it a distribution deal that gave her a bigger presence in North America. Marriage and motherhood kept her off the road for a bit, but she and her brother Jay created the score for the popular NZ series, “The Brokenwood Mysteries.” Her fourth album, Don’t Be Afraid, debuted at #3 on the charts in New Zealand and earned her fourth Tui.

In the decade since her debut, Tami has created a striking look, channeling ‘50s Pin-Up Girl meets Cowboy Sweetheart (envision homespun Loretta Lynn with a soupcon of Bettie Page glamor, it’s all Bangs, Beehives and fringed and spangled Nudie Rodeo attire). But her stylish looks would mean nothing without a big voice to back it up. Her music conjure progenitors like Staple Singers, Etta James, Sun Records and the holy trinity; Dolly, Loretta and Patsy. Her 2018 album, Sassafrass! managed to distill those inspirations as well, allowing her to color outside the lines.

Less than two years since that album’s release and she’s returned with her sixth album, CHICKABOOM!; the title as much a testimony to her fiery style as a sly homage to Johnny Cash And The Tennessee Three. The record crackles to life on the opening cut “Call Your Mama.” Rumbling bass lines connect with reverb-drenched guitars and chunky percussion, but it’s Tami’s vocal delivery, equal parts sassafrass-y and seductive, that kicks it into overdrive. She’s been patient, but she’s done, so she kicks an entitled man-baby to the curb; “Changed the locks, threw your box of things out on the street, but sure as hell kept your ring/You wanna lie and cheat, well whose food you gonna eat now, whose bell you gonna ring-a-ding-ding, playing around like a cat with a string? Why don’t you call your mama?”

Not only do both “Queenie, Queenie” and “Hey Bus Driver” offer piquant snapshots of life on the road, and the precarious balance of music and motherhood, they also illustrate the depth and breadth of her stylistic range.

The former, is anchored by a strutting, shuffle rhythm that’s powered by rattle-trap percussion and little else. Tami chants the lyrics like a mantra; “Chickens need feeding, dog needs a bone, bills need paying and the bank’s on the phone/Dishes need washing, the kids do too, man come home and he want to woo-hoo…Mama’s gotta hustle, do another show cause they won’t play a lady-o on Country radio.” The arrangement is a clear homage to the Dixie Cups’ Big Easy classic, “Iko Iko,” but that doesn’t make it any less fun.

The latter wraps twangy guitars, growling bass lines and a handclap beat around a spitfire melody. The brash instrumentation and arrangement nearly camouflage the melancholy ache that accompanies touring sans family. The strange sensation of being alone in a crowd, feeding on the passion to perform sometimes at the expense of family life; “Got no honey in the morning, got no sugar in my bowl, I’m just bringing home the bacon, raking it in making that dough…Hey Bus Driver put your foot down, cause I’m on fire/21 shows out on the road, it’s only 3 more days, only 2 more days, only 1 more day and I’m coming home.”

Much like Chris Isaak, k.d. lang and James Hunter, Tami mines music from the ‘50s and ‘60s without ever cannibalizing bygone styles or sounding derivative. The best tracks here showcase her powerhouse vocals and sharp songcraft. “Ten Tonne Truck” opens with an insistent Tom-Tom kick, sugar-rush acoustic guitars and loose-limbed bass runs. The lyrics share a slightly apocryphal version of her origin story; “Well the bank took the house when Daddy lost his job, put a hitch on the back of Mama’s little silver Dodge/Drove with nothing but our clothes and guitars, right down to Nashville gonna be big stars.” She punctuates each verse with her brassy whipcrack “Ha-Ha-Ha-Ha.” The melody and instrumentation feel like a caffeinated take on Tennessee Ernie Ford’s epochal “Sixteen Tons.”

Conversely, “You Were Mine” is slow and sultry. Guitars alternate between lithe licks, stinging riffs and sputtery ostinatos, bookended by prowling bass and a walloping backbeat. Tami’s vocal gymnastics summon antecedents like Peggy Lee, Dinah Washington, Janis Joplin, Nina Simone and Sharon Jones. A true torch song, there’s no wasted motions and her words cut to the quick; “Take my heart, it used to be so supple and sweet, now it’s withered on the vine/There’s before and then there’s after, you were mine.”

Then there’s the rip-snortin’ Rockabilly of “Tell Me That You Love Me.” Pyrotechnic guitars match slapping bass lines and a ricocheting rhythm for that boom-chicka-boom verisimilitude. Here, Tami’s full-throated vocals align with Kiwi singer-songwriter Delaney Davidson. Accelerating through the melody’s hairpin turns, the lyrics are suitably feverish, “Please please, pretty please, pretty pretty-please me/Tease-tease don’t you tease, baby don’t you tease me, I’m here, you’re here, both of us are waiting here, I could give a kiss to mister, won’t you be my baby please?” On the break chicken-scratch rhythm riffs collide with scorching lead guitars. The song echoes frenetic classics like Lonnie Donegan’s “Rock Island Line” and “Hank Williams Sr.’s “Why Don’t You Love Me.”

Finally, “Sister Mavis” is a thrilling ode to the Soul Survivor Mavis Staples. Much like “Miss Jones,” her fiery encomium to the late Soul-shouter, Sharon Jones, this cut is the album’s centerpiece. A sanctified rave-up it blends throbbing, vibrato guitars, thundering bass and a shuffling, handclap beat. Tami truly takes us to church; “Some people dig Matthew, Mark, Luke and John, them old boys could preach it, Son, don’t get me wrong/But when I need someone make me sing and shout, throw my hands up and drive the devil out, make me moan, make me cry, stand up and testify, send for Sister Mavis.” Blustery guitars shang-a-lang and shimmy on the break rendering the song irresistible.

Other interesting tracks include the Folky Bolero of “Any Fool With A Heart” and the hammer and tong banshee wail of “16 Miles Of Chain.” The album closes with the Tropically-tinged lullaby “Sleep.” It’s a tender finish to a rollicking good record.

Listening to the album might not make your troubles melt away, but it certainly allows you to forget them for a bit. Brash, infectious and insouciant, CHICKABOOM! is most definitely the first great album of 2020.