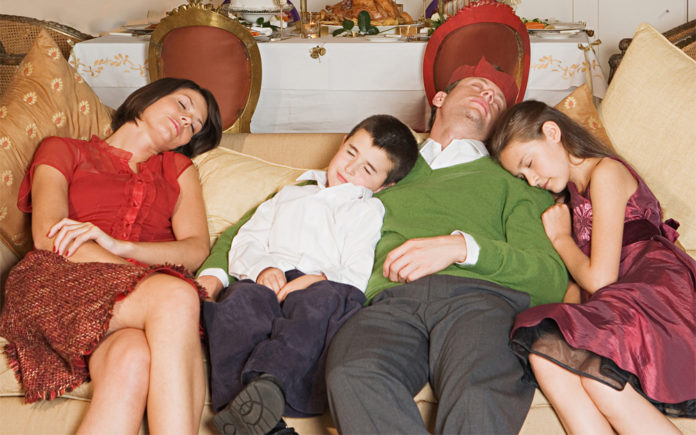 It is commonly thought that eating turkey will cause sleepiness because it contains tryptophan. Tryptophan is an amino acid that enters the brain and forms serotonin, which then gets converted to the sleep inducing hormone melatonin. But research has shown that turkey doesn’t trigger sleep anymore than other foods. Gram for gram, cheddar cheese actually contains more tryptophan than turkey does.

So why do we get sleepy after eating a big Thanksgiving meal? It has to do with the large amounts of carbohydrates and alcohol associated with the celebration. The large amounts of stuffing, mashed potatoes, pumpkin pie, deserts, cocktails, beer and wine will trigger the release of insulin which will lower your blood sugar. The sudden decline in blood sugar can cause lethargy and drowsiness. The insulin will also remove most amino acids from the blood, except tryptophan, allowing tryptophan to enter the brain and ultimately form melatonin.

So basically, any big meal containing tryptophan and a lot of carbohydrates can trigger sleepiness, not just turkey. And don’t forget, if alcohol is part of your Thanksgiving dinner, it can also trigger sleepiness.

Cranberries are a staple of the Thanksgiving meal. Cranberries do have health benefits.

Cranberries may be helpful for heart health by helping decrease inflammation and may help slow progression of tumor growth of certain cancers.

The antioxidants in cranberries also have dental benefits by preventing bacteria from attaching to teeth and preventing gum disease.