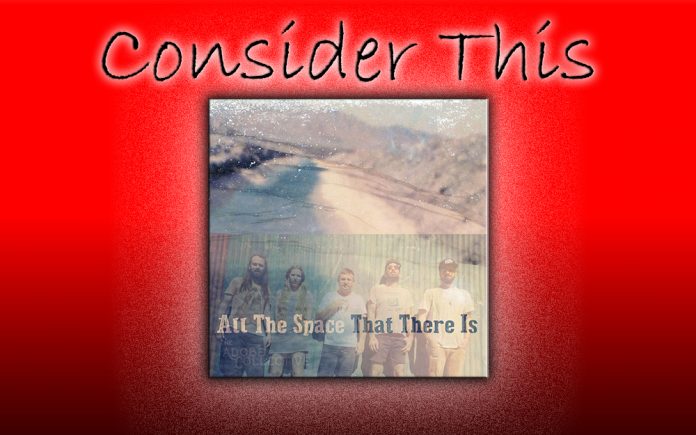 “Love is not a feeling you can make, it’s not a matter of believing, beliefs don’t change the truth/And love is not a picture you can take, you can give yourself all the best advice in the world, the world, the world…and still” That’s The Adobe Collective sharing some hard won wisdom on the song “To Ourselves,” off their new album, All The Space That There Is.

The nucleus of The Adobe Collective has always been Tim and Faith Chinook. Soulmates since their early teens, the pair married and endured a peripatetic existence as Tim followed family tradition by enlisting in the Navy and pursuing a medical career. Following a stint at the Naval hospital in San Diego (where he completed his pediatric training), the family moved to the High Desert, while Tim was stationed at the Marine Base in 29 Palms. The couple immediately fell in love with their desolate surroundings.

Both Tim and Faith had grown up in musical families. Although he was raised on a strict diet of Classical and Folk, by his teen years, Tim immersed himself in the Grunge scene and formed his first band in the eighth grade. Throughout college he kept time as the drummer for a Jam band called Ebu And The Dancing Guru (um, Yikes). Faith had also put her musical ambitions in the rear view, but their new solitary environs inspired them to create new music. Their band moniker is an homage to the historic, 1937 Adobe house they were renting (and later purchased). Following a couple of years of serious woodshedding, they had amassed enough new songs to record their first album

Their self-titled debut, produced by Tim and Gar Robertson, arrived in 2014 and immediately created a buzz. Rather quickly, they were playing high profile gigs at The Hood in Palm Desert and Pappy & Harriet’s in Pioneertown. That led to a slot at the prestigious Joshua Tree Music Festival. A couple of years after, they were back in the studio, this time with musician/producer Chris Unck at his local recording facility, High Lonesome.

A Hi-Desert denizen for several years, Chris spent his formative years in Georgia. Along with his band Black Roses, he’s shared the stage with the likes of V.V. Brown, Paolo Nutini and Train. Pink became so enamored with their sound, she invited them to open her European tour. Although he’s collaborated with high profile artists like Butch Walker, Lisa Loeb and Gavin DeGraw, once he came to Joshua Tree he put his jet-set days behind him and set up his own studio.

Their sophomore effort, Take Heart, Take Care was released in 2016 and received rapturous reviews. Soon, The Adobe Collective were celebrated in the pages of Palm Springs Life, The Desert Sun, the Coachella Valley Weekly and the Los Angeles Times. Their Cosmic Americana music felt like a natural progression from the sound Gram Parsons and other Hi Desert pioneers established nearly 50 years before.

Now The Adobe Collective is back with their third long-player, All The Space There Is. The album opens on a tentative, vaguely familiar note with “Carousel.” This song originally appeared on Take Heart, Take Care as “Carousel Or Hear Me Echo.” That version started as a dusty Desert waltz before quietly gathering speed, adding chunky percussion and sousaphone. Here, they jettison the Gypsy Jazz accents, slow the action and lattice searing electric guitar and strummy acoustic notes over spacious keys and a kickdrum beat.

This new rendition drifts like a dry desert breeze, the mood feels diffuse and languid. Between Faith’s wordless croon and Tim’s warm tenor there’s an unspoken air of misunderstanding and melancholia bookended by sandblasted guitars and a shivery/static-y instrumental outro.

There’s something sort of thrilling about a band that’s willing to follow their muse. Sometimes that means stepping out of their comfort zone and even confounding longtime or passionate fans. Fleetwood Mac did that following their million-selling breakthrough self-titled effort and “Rumours.” With “Tusk” (released 40 years ago), guitarist Lindsey Buckingham grabbed the reins and took the Anglo/American five-piece on a wild and existential ride. It wasn’t exactly radio-ready and maybe that was the point. Artists like the late David Bowie or Elvis Costello, rarely made the same record twice. That’s what makes their music so fresh and exciting. With this new effort, The Adobe Collective has taken a page from that playbook.

Tracks like “Blind” and “The Sky Starts At The Ground” kick over the traces. On the former, lightning bolt guitar riffs shazam through a jigsaw arrangement that features cantilevered keys, swooshy bass and jittery, handclap rhythms. Stacked harmonies pile atop hooks galore, nearly camouflaging lyrics that obliquely hint at deep domestic discord; “…I was blind nearly all of the time, I was blinded by the way that you said you thought we had it all…I was waiting to see myself in the back of your mind, hesitating between you and me, between me and you/There’s a mirror of love inside us all, it was killing me, by the way it was killing you.” Luckily, in the midst of marital angst, there’s detente; “We ain’t living just to die, it’s okay to let it make you cry.”

On the latter, glazed guitars ride roughshod over blurred keys, angular bass lines and a galloping beat. Alfred Lord Tennyson once suggested “Tis better to have loved and lost than never to have loved at all.” The Adobe Collective espouse those same sentiments, insisting with great love, comes collateral damage. Their solution: “kicking fear to the dust.” Guitars rev and retreat on the break. Conversely, the dancing synth figures that close the song shares some musical DNA with “The Ghost Inside You,” a melancholy masterpiece by the Psychedelic Furs.

The best songs here just completely subvert expectations. If T. Rex stopped by the New Seekers house to jam, it might sound something like the aforementioned “To Ourselves.” It manages to be both brawny and ornate. Muscular guitar riffs strut and stutter over brittle bass lines, crashing keys and a hiccupping beat. Chris unleashes a guitar solo that’s equal parts swagger and sunshine. As the song winds down, it folds into “You’ll Never Tell.” Quavery keys wash over thumping bass and an insistent Tribal tattoo. Dusty and cinematic, the urgent instrumentation and spectral arrangement conjures up Spaghetti Western imagery, even as cryptic lyrics like “Honestly I want to see right through you, I wanna take you all in, I wanna be your one” simply crackle with erotic frisson. A reverb-drenched guitar solo unfurls on the break, before the song sails off into the stratosphere. Suddenly, tempos oscillate wildly, becoming Prog-y and Psychedelic in all the right ways. Buzzy synths collide with wailing, wordless vocals and banshee guitars. Something of a tour de force, it promises to stretch out to epic proportions in a live setting.

Finally, “Shine On” feels like the best Classic Rock anthem you’ve never heard. Chunky guitars ebb and flow, connecting with shimmering synths, loose-limbed bass and a walloping beat. Tim and Faith’s vocals occasionally intertwine, weaving in and out of the instrumental tapestry. The lyrics are just looking for a little emotional rescue; “And it felt like I ran for days, my face held by the sky, looking into my fears, in the mirror that it hides/And I run with the devils when the season is right, knowing I will find my way, trusting nothing but the light.” On the break, Chris rips a bristling solo that snaps, crackles, fuzzes and growls, before the song sputters to a halt.

A couple of tracks find Tim and Faith following in the footsteps of Johnny & June, Sonny & Cher and George & Tammy. On “Warm To Me,” the pair trade verses, sketching out a stark tableau of marital ennui. Breezy guitars glide past darting bass lines and a swivel-hipped beat. The tone is blithe and conversational, but the threat of infidelity is deadly serious; “I been thinking about asking someone new, yes and darling, she might even look like you…” Chris’ sleepwalking lap steel notes nearly cocoon the verbal gymnastics, splitting the difference between lush Tropicalia and good old Country comfort.

Meanwhile, “All I Know” is a twangy Two-Step. Here cascading guitar riffs and sinewy bass are tethered to a clip-clop rhythm. Once again, Tim and Faith trade verses, dovetailing on the chorus. But this time, the lyrics are as upbeat as the jaunty melody. They manage to revel in the joy of family and celebrate the continuity of generations; “Who I am I’ll always be, you can’t take that away from me/Hey there angel by my side, see my daughter smiling like her mother, see my son there shining just like dad.”

The album’s final two tracks are neatly juxtaposed. “Taking Time” is airy and uncluttered. Courtly Spanish-flavored guitars and sparkly synths are reinforced by keening pedal steel and a rock steady beat. Intertwined vocals hint at a romantic rapprochement, as the lyrics concede “We’ve been taking our time carving out a sandpaper life, and we’re not going to lose any sleep over nothing.”

The closing cut, “So Happy It Hurts” weds clanky, industrial noises to ambient snatches of color and sound. The lyrics’ blurred-out bliss is blunted by filtered vocals and warped instrumentation. It’s a fractious finish to an audacious album.

The Adobe Collective is a full-fledged band now, featuring Tim on vocals and guitar, Faith on vocals, keys and synths, Caleb Wynn on drums, Spencer Keizer on bass and Chris Unck who added guitars, vocals, lap steel and pedal steel. The band was augmented by Lucio Menegon on slide guitar and Hi-Desert legend Kip Powell played bass on “All I Know.”

For their first two albums, Tim and Faith brought fully-formed songs into the studio. This time out, the band collaboration was more organic. Recently, Tim and Chris (separately) explained that everyone had a hand in building each song from the ground up, creating their own parts. Song skeletons were fleshed out and then quickly recorded, the result is lightning in a bottle. They each characterized the sessions as something akin to musical group therapy.

By trusting their instincts and refusing to be pigeon-holed, The Adobe Collective has forged a new path. All The Space That There Is is by turns sleek, spacious and shambolic, honest and open-hearted. (The Adobe Collective is playing a free Record Release show, with special guests, The Blank Tapes, at Pappy & Harriet’s Pioneertown Palace, Friday, January 10th at 8pm)