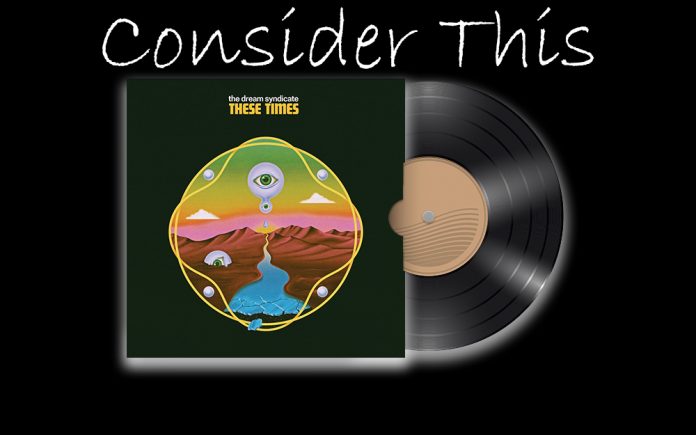 Nearly forty years ago, Steve Wynn, Kendra Smith, Dennis Duck and Karl Percoda came together to form The Dream Syndicate. The band was part of Los Angeles’ thriving music scene. The musical landscape of L.A. was as sprawling as the city itself. There was pioneering Punk from X, the Germs and the Plugz, the skinny tie Power Pop of the Knack, the Plimsouls and 20/20, the Roots Rock sounds of the Blasters and Los Lobos and Blues/Jazz/Psychobilly from  The Flesh Eaters.

L.A. native Steve Wynn began collaborating musically with Kendra Smith while both attended college at UC Davis. Returning to his hometown together, as Steve pursued a post-graduate degree at UCLA, the pair connected with Dennis and Karl. By 1981, everyone had settled into their roles, Steve was the primary vocalist and rhythm guitarist, Karla and Dennis held down the bottom on bass and drums, respectively, and Karl became lead guitarist. Thus, The Dream Syndicate was born, the band began gigging around town. They quickly became part of a loose collective known as the Paisley Underground.

Although most L.A. bands took their cues from the British Punk movement or the primitive cool of the Ramones, the Paisley bands, which included The Bangs (they later became The Bangles), The Three O’Clock, Rain Parade and Green-On-Red, were influenced by Baroque Pop, Garage Rock, Power Pop and Psychedelia. The Dream Syndicate was primarily inspired by the darkly mercurial sounds of Bob Dylan, Television, the Velvet Underground and Neil Young’s wild collaborations with Crazy Horse.

Less than a year in, the band had built a loyal fan base and created a serious buzz. Following the success of their self-released, four song EP, they signed with L.A.’s premiere indie label Slash. Their first official long-player, The Days Of Wine And Roses was produced by Punk Poet Provocateur/Flesh Eater front man/A&R guru Chris Desjardins. Released in late 1982, the album was a revelation, pairing literate, tough-minded lyrics with guitar-driven instrumentation that walked a tightrope between economical and expansive. Critical acclaim was unanimous and Days… topped myriad critics’ lists.

While that record never ascended the Pop charts, much like their own heroes, Neil Young and The Velvet Underground, their sound proved highly influential. Days… found fans with up and coming bands like The Pixies, Nirvana and American Music Club. These days, their influence can be found in the music of Parquet Courts, Nap Eyes and Ought.

The Dream Syndicate had a quixotic seven-year run. Kendra jumped ship almost immediately, hooking up with Rain Parade architect Dave Roback to form Opal, before embarking on a short-lived solo career and then abandoning music altogether. Karl hung on through the recording of their sophomore effort, Medicine Show (which was embraced in Europe and dismissed in the U.S.), plus a second EP, entitled This Is Not the New Dream Syndicate Album… before he hit the road.

Steve and Dennis carried on, enlisting guitarist Paul B. Cutler and bassist Mark Walton. Between 1986 and 1989 they released two studio albums, Out Of The Grey and Ghost Stories, plus a concert souvenir, Live At Raji’s. As the ‘90s dawned, everyone went their separate ways. Steve embarked on a critically acclaimed solo career recording 10 albums over the years, occasionally released as Steve Wynn And The Miracle Three. He also participated in all-star collectives like Gutterball and The Baseball Project. Dennis returned to his pre-Dream Syndicate band, Human Hands and Mark became part of the beloved L.A./New Orleans band, The Continental Drifters.

In 2012, Steve was set to tour Spain, since the members of both The Miracle Three and The Baseball Project were unavailable, it was suggested that The Dream Syndicate reform. Neither Kendra Smith nor Karl Precoda were interested. So Steve and Dennis asked Mark Walton to handle bass duties and Miracle Three guitarist Jason Victor stepped in. Bolstered by the success of the show, the recalibrated Dream Syndicate continued to add concert dates. Encouraged by the reaction from longtime fans and critics, the band returned to the recording studio. They enlisted ex-Green On Red pal Chris Cacavas to add keys and co-produce, and the result was their fifth official long-player, How Did I Find Myself Here?

Released nearly 35 years after The Days Of Wine And Roses, the 2017 album felt like the band had never lost a step. Even as How… displayed the same nervous intensity of their earliest music, it never seemed archaic or repetitious. It still felt as though The Dream Syndicate’s music was still ahead of the curve.

2018 found the band reconnecting with Paisley Underground compadres like The Bangles, Rain Parade and The Three O’Clock to finally begin a long gestating project. To commemorate their musical friendship, each of the four bands covered a song by the other three. Helpfully entitled 3X4, the 12-song collection wasn’t so much an exercise in nostalgia, as a thrilling reconfiguration of classic Paisley songs, Initially issued as a limited edition two-record set for Record Store day, it arrived on other formats in February of this year. Now, The Dream Syndicate has returned with their sixth full-length effort, These Times.

The album opens with “The Way In.” A hypnotic groover, it serves as a pithy intro to the record. Careening guitars crash through the speakers, slithering through spiky bass lines, droning keys and a chronometric beat. Steve’s laconic drawl weaves in and out of the mix as he attempts to acclimate; “Trying to reconcile the past with the present, which one fits and which one doesn’t.”

Charting this band’s musical cartography, it’s safe to say they never tread the same path twice. That Yin Yang dynamic is in full effect on two tracks, “Bullet Holes” and “The Whole World’s Watching.” The former is surprisingly sleek, sporting muted keys, shimmery guitars, pinwheeling bass lines and a loping rhythm. Conversely, the lyrics speak to psychic wounds, the holes in the title that never heal; “Eventually, you were brought down to your knees, feels like a relief/Peace of mind, and it’s easier on your spine.”

The latter lands somewhere between Tiki-inspired Exotica and a gritty Blaxploitation theme. Bubbling percussion and throbbing bass lines lay a foundation, accented by reverb-drenched guitars and slinky keys. The vibe is tense and menacing, and the instrumental overture clocks in at just under two minutes before Steve deigns to drop in to see what condition his condition is in. As the instrumentation churns, he remains aloof, conceding; “Things are going to get mean, so I’m standing on the sidelines, observing the scene.”

Dream Syndicate songs always manage to cast a noirish, nocturnal spell, and that tradition continues on four tracks. There’s some skittish skullduggery afoot on “Put Some Miles On It.” Stripped-down rhythm guitar collides flange-y lead guitar and ricocheting bass runs. Fluid keys achieve an almost a billowy harp sound, even as the locomotive beat ratchets up the tension. Steve’s terse reportage chronicles the life of a working musician; “Had a long way to go, from the last gig to the next show, I was beat and I was tired, but the AM radio was so inspired/Had to drive overnight, Kansas City by the harsh daylight, I stuck my head out to feel the breeze, and then I took a few of these.” Sheila E. was right, it is a glamorous life

The jangly, metallic crunch of “Still Here Now,” weaves descending piano notes, spidery bass, quicksilver guitars around a tumbling beat, as breathless woo-hoo-y backing vocals crest over the top. The lyrics feel like a breviloquent meditation on the band’s circuitous career; “Long stall of time is all that’s left, still here now.” The song is by turns, wistful, autumnal, fractious and recalcitrant. A serpentine guitar solo on the break burrows into a skronky feedback outro.

“Recovery Mode” blends a four-on-the-floor big beat, thumpy keys, sinewy bass and muscular guitars. The vocals are sneer-y and the lyrics are slightly confrontational; “Are you a shark or a rabbit, in the dark afraid to grab it/Thrashing at the scenery with with random sensibility, give me distraction, get me in on the action.” Guitars shiver and blaze on the instrumental break

“Speedway” is the album’s magnum opus, a Psychedelic boogaloo that harkens back to the band’s Garage-y beginnings. Slithery, squiggly guitars connect with dissonant Farfisa notes over twisty bass lines and a pummeling beat. Filtered vocals spew clipped couplets that have a Dylanesque thrust; “The garden is sticky sweet, captured and complete, I’m a pollen attack with an unrelenting breeze.” It’s an appealing, shaggy dog saga, that speed-shifts into orbit, twin guitars jamming on the break, before achieving interstellar overdrive.

Other interesting tracks include the shadowy delight of “Black Light” and the rapier sharp “Space Age.” The album closes with the “Treading Water Underneath The Stars.” Strafing guitars and labyrinthine piano figures are bookended by thunderous bass and tick-tock beat. Cryptic lyrics unspool with efficacy and opacity, like an End Times haiku, as the melody drifts into the either.

Produced by John Agnello and the band, the album was recorded at Montrose Recording in Richmond, Virginia. Vocal assists were provided from Filthy Friends drummer Linda Pitmon and Stephen McCarthy of The Long Ryders.

Remarkably, Steve and Dennis have kept this latest incarnation of The Dream Syndicate alive. Seven years in they sound as intriguing and as vital as ever. The opening track of These Times promises an album’s worth of “hot licks and rhetoric,” and they deliver.