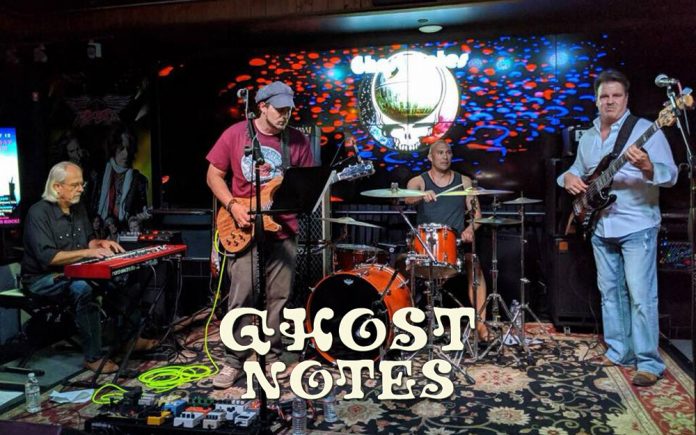 In an ancient sanskrit ruin, the words etched by a shaman in a scroll declares that in song and celebration, voices bear messages to the threshold of Heaven, and sliding or flatted notes are blue highways between this world and the other.

The universe that set Jerry Garcia up as a medicine man in an age thirsting for mystery, still flashes those of us who combed the landscapes, following our favorite band near and far, so long ago. Combining gorgeous suites of partially improvised music and classic songs of folklore in some ‘odd Americana’ past, we soon became enthralled with the catalogue that is the Grateful Dead. Since his deadhead youth of 1986, multi-instrumentalist Mike Hammons’ passion project sat quietly brewing in his studio for many moons, and this past January 24th, marked their one year anniversary.

The Ghost Notes is a band that has brought an energy so engaging and uplifting to our valley, that when this foursome take the stage, the Big Rock Pub lifts off the ground and heads directly for the stratosphere. Under the swirl of the lights, the beautiful ghost of a tune emerges from their hands into the air, not just any air: but the American air, of boxcars passing and mere mention of towns like Wichita and Las Cruces. The bass player flashes a warm smile to the audience as the tune then easily sways in variation to another tale on Eyes of the World, one of finding solace beneath a rippling moon that sparkles in the corner of the fiddler’s eye. Onward to the next tune where the lead guitarist, with a slight grin of whimsy, soulfully tells the sweet ballad of an unshakeable bond between two beloved misfits. The band steers us to Franklin’s Tower, the foursome bring us to another corner of Americana, to a downtrodden fable where the words might reminisce that our teacher’s voice is in the wash of muddy river water over the ancient stones. Onward to a Dark Star, where you are catapulted to whimsical embrace among the tribal sky in a restless exploratory jam.

Damian Lautiero, on lead guitar, whose virtuosic stylings add dragon sized instrumentation to the unfolding tales. Mr. Lautiero brings an inexhaustible wellspring of vocals, with the furrow of mystery and deliberation, we witness in that space where notes are waiting to be born as he sends a fiery cascade into his audience. It is through his notes, you become the sand in a fluid sculpture that beautifully takes no particular form yet remains cohesive.

Mike Hammons, the heartbeat of the bass and lead vocals, steers the mighty ancient tunes, where in these notes you float like a cell in a bath of nutrient. Hammons walks the base like thunder through the audience that oft feel like marches of Titan’s whose variant footsteps echo through the swirl of the songs.

Rob Peterson’s percussions breathing elastic time into the tapestry, tidal size proportioned resonances, rippling through the building. Peterson’s musicianship harks tribal callings that guides you in sweet taps and often intense rhythmic climbing.        The legendary Bobby Furgo sitting in on piano, violin resting upon his lap, notes cascading down upon the audience, ascending varied pitches, be it rag time or sweltering blues, he then takes to the fiddle, whose sweet sound slices the air. The song selection is ever unpredictable and unexpected, the crescendos and monsoons of progressions take hold and gently bring you back just as majestically as they build you up. We are transported musically to another time and place. No pomp and circumstance for us Yankees or desert folk, but with hard luck and a little grace – our own raw melodies are sent up with the drafts of a lyrical campfire.

As you find yourself amidst these songs that span a journey from bluegrass to psychedelic rock, one would find the audience enraptured unlike any other concert attendees in the valley.

Some would listen with their eyes shut, swaying; many would gaze toward the men onstage as you would toward your oldest friend – who was about to attempt something marvelous and difficult – with a blessing look. A crowd so dense, we seemed to float and dance in air, embracing and hanging onto every note and lyrical poem sung. The men of the Ghost Notes pour forth celestial architectures of sounds and stories and tales of quicksilver glistening with might-be’s, cities of light at the edge of a sea of chaos, monumental forms that could be partially recollected in tranquility and in celebration of love and life.

“My love for this music is something that I’ve studied closely over the years, since my youth of venturing out to Grateful Dead shows, and performing locally, I noticed there was a need to bring that energy to the desert, and so this band had been in the works since early on”, says Hammons.

As fellow Deadheads, we explore the connection between musician and audience, be it self-transcendence or communal tribal instincts. Both Hammons and Lautiero understand the road back to the collective experience of music is one of synergy and the joy of the audience is paramount.

“The catalogue of the Grateful Dead is so vast and varied, we just love bringing that joy and experience to our audience,” says Lautiero.

The Ghost Notes offers up those nostalgic notions of songs that hark a life once ventured, yet presenting the beauty of the Now in present moment with one of the most memorable concert experiences ever to set fire to this side of the mountains. A diverse catalogue of songs so dense yet these gentlemen craft every song as if it’s their own. It is in this space when the Ghost Notes humbly command the stage, like bodhisattvas glowing in the lights, they unconditionally embrace their audience, where any and all can wander in and partake on the journey. A successful slew of concert dates dot a twelve month journey, and on those nights, much like this one, the hair on the back of your neck would stand on end as a presence came into the room, given a body by the magnificent sounds pouring from the stage, where spirit, tribe and love commune.

As we spilled into the parking lot of the Rock, fanning back into consciousness, many of us discussed how mere words often escape to recapture the beautiful welter and anomaly of the Ghost Notes experience. I encourage you to buy the ticket, take the ride, and join us, and when Mike Hammons looks upon his audience and gives that knowing nod, he is inviting you to join in, welcoming you to a place we once left long ago, and forever needed to find again.