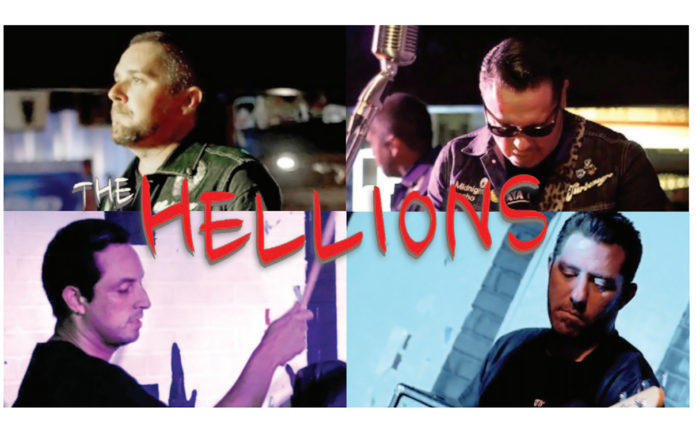 It was the year 1998. A local video chain, Video Depot was to hold their annual Christmas party at one of the many hotels in Indian Wells (maybe Embassy Suites). They were lacking entertainment. Angel Lua, one of Video Depot’s most beloved employees, steps up to the plate and offers to debut his new musical project, The Hellions. Obviously, those with any sense of taste were immediately hooked. Twenty years later and The Hellions are still rocking hard and have finally released exactly one album.

The Hellions have been a driving force in the desert music scene since 1998. This year marks the 20th anniversary of The Hellions. To celebrate, they have an amazing Vicennium Halloween show planned on Friday, October 26th at The Hood in Palm Desert and are releasing a special version of their debut album. The line-up includes Nick Oliveri performing his Death Acoustic set as well as a set with his long-standing band, Mondo Generator. It also includes another desert legend, Herb Lienau, playing a set as his alter-ego, Herbert. Rounding out the already stacked line up will be the always entertaining Hot Beat Pussy Fiend, featuring Joe Dillon and Scotty Brooks.

We reached out to the guys and asked them to share some memories from their band’s duration.

Angel Lua: “When we started the band, The Hellions was just an excuse for our group of friends to get together, pretend to be greasers and write shitty punk rockabilly songs that we could sing along to. We hung out at our friend’s mom’s dress shop, carted cases of booze that we bought from Circle K down the street, jotted lyrics on the back of flyers we collected from our trips to LA and the Inland Empire, and basically learned to play our instruments by trying to learn Ramones, Social D, and Eddie Cochran covers. And we always admired how artists and other musicians created these illusions through their performance. Looking back, every show we went to together became a topic of discussion afterward when driving down the 10 at 4:30 in the morning—not only in the musicianship but also the visual performance. We broke it down like dimestore philosophers at times and learned the rock’n’roll language that suited our own personal growth as a band. We are excited that we were able to catalogue the last 2 decades in a full-length album but also see Hymns from the Other Side as the end of an era for us. We are moving forward because, for good and bad, we still have a lot more shit to say. So, for the story of The Hellions written on the back of a wadded-up liquor store receipt: There was heartbreak, DUI’s, divorces, unpaid gigs, blood, and lots and lots of alcohol, yet we will still smash people over the head with our bass guitars if they bump into our mic stand or amps for the next 20 years to come.”

Bob Llamas: “We started this band 20 years ago after going to the Hootenanny Festivals in Oak Canyon Ranch. After watching bands like The Cramps, X, The Blasters, Social D, Throw Rag, and Los Infernos, we were inspired to start our own rock n’ roll inspired band. Music is a big part of our lives whether it’s creating, playing, or going to see bands we love. I feel very fortunate to play music with my closest friends

Travis Rockwell: “What needs to be said? It all started 20 years ago on a cold winter night… 4 friends… got drunk … and jammed. There were lots of little line-up changes throughout the years, but this is The Hellions. The night of the 26th, we celebrate not only our band, but us as friends. The band has been around 20 years, but we’ve been friends much longer. The music has kept us close, young, and having fun.”

Jamie Hargate: “I’m stoked on being in a rock n’ roll band that has been solid in the desert scene for 20 years. Playing music with some of my best friends and having fun is what has made this band last for so long. Long live rock n’ roll!!!”