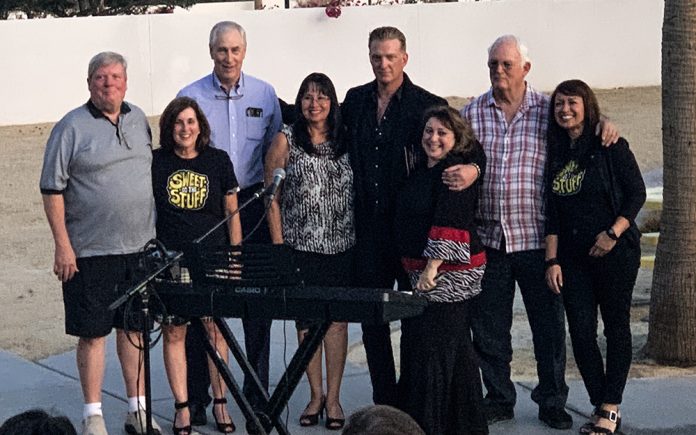 Children make the most beautiful music in the biggest of ways. The Sweet Stuff Foundation provided a grant to the Children’s Discovery Museum of the Desert, a private non-profit organization founded in 1986, to build a ‘larger than life’ “musical pathway.” As the children walk through the museum grounds, they can express themselves by playing the oversized set of tuned drums, chimes, and a “metallophone” which can be heard throughout the museum located at 71-701 Gerald Ford Drive in Rancho Mirage, California.

Attending the dedication event were CDMOD Chief Executive Officer Carol E. Scott, CDMOD employees and board members, The Sweet Stuff Foundation board members Michael and Irene Homme and Cecilia Diaz, Academy of Music Performance (AMP) director Will Sturgeon, members of the media and none other than the Queens of the Stone Age frontman himself, Josh Homme.

Homme founded The Sweet Stuff Foundation in 2013 to give assistance to career musicians, recording engineers and their families struggling with illness and disability. In addition, their two-pronged approach also commits to providing assistance for music lessons, instruments, and musical collaborations for children. To help foster an atmosphere of creativity and introduce a healthy outlet via music, so that the “Sweet Stuff” will continue for generations to come.

The CDMOD mission is to provide a valuable community resource for children and families to experience the joy of learning about themselves and the world around them. The museum inspires personal growth by engaging curiosity and creativity through hands-on explorations of exhibits and programs. Their values include Learning, Family and Community. They are open Tuesday-Saturday 10 a.m. to 5 p.m., Sunday 1 p.m. to 5 p.m. and the third Wednesday of every month 10 a.m. to 8 p.m. 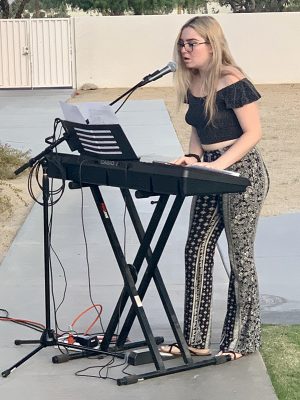 As part of the festivities, AMP member Tiffany Campbell sang and performed two songs on the keyboard. She first played Shallow by Lady Gaga and Bradley Cooper. She then brought the house down with her yet to be named original song “Untitled Masterpiece.” Campbell was fearless in her ability to express herself. She joyfully shared, “I felt amazing singing up there. The song is about personal experiences, that’s just how I let out my emotions and cope with my anxiety. I just put it into my music.” Campbell is a long-time student of AMP and has her own band, The Lollipops. Sturgeon professed, “Tiffany holds the title of the longest AMPer. She’s been with us for 5 years.” Campbell is proud of her time at AMP and is mindful of the outlet music has provided her. “I’m on top of the world. It feels pretty amazing to be able to do something that long that I’m so passionate about.”

Campbell’s success at AMP is directly correlated with what The Sweet Stuff Foundation and CDMOD are attempting to accomplish. Her mother is Annmarie Reifer Campbell, Chief Development and Marketing Officer for CDMOD. She shared frankly about her daughter, “Tiffany has gone through hell. She lost my father and that destroyed her and yet she had the music to be able to write about it so she didn’t go off the deep end. We lost my mom in January and the same thing, she had her music that she could write and get her feelings out. She writes about what is going on.” Both AMP and The Sweet Stuff Foundation create more than opportunities.

The Sweet Stuff Foundation has also unsurprisingly contributed grant monies to AMP to help fund young musicians participation and to assist them in affording instruments that they can rehearse with at home during their year-round programming, and then perform on as professionals around our community. Sturgeon is grateful. He shared, “The Sweet Stuff Foundation has given a bunch of money to AMP, which has been hugely helpful to us. They support music all over the valley and this is another great musical resource they’re giving to our community.” Mom Campbell is also thankful, “It’s amazing, it’s music, it’s kids, you can’t get any better. My daughter is the perfect guinea pig if you will, for something like this. I believe wholeheartedly in it.” Homme also swears by this mission.

Meeting one of the founding members of KYUSS was a highlight for both Campbell and Sturgeon. “I had never met Josh. Everybody who talks about the music scene talks about Josh Homme. It was nice to actually finally meet him,” shared Sturgeon. Campbell concurred, “I’ve never met him before but I’ve heard a lot about him because of AMP. I think he’s a great guy.” Homme is a remarkable musician and his appearance only solidifies him as an equally prominent leader in our community. 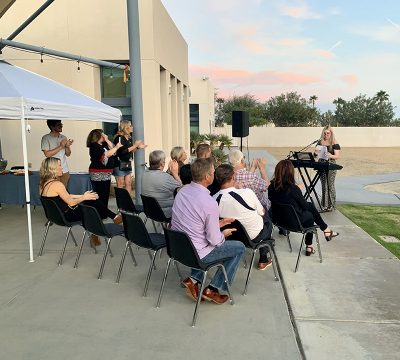 Homme may have been the honored guest, but Campbell stole the show and gave a glimpse into the healing power of music and the enrichment it provides. Her mother shared a story: “When she was really young and she would get nervous about talking with people, I’d give her a microphone and she’d be fine and then I suggested she start sleeping with a microphone under her pillow. She started doing that and thought I was nuts. Then she learned she didn’t need the microphone. Her voice illuminates how she feels.” Campbell has also continued to learn to give without expectation of return through AMP. Her mother instilled this at a young age. She continued: “I have a non-profit that she works with and she started the Music Angel program. She goes with her friends or by herself to nursing homes and rehabilitation hospitals and she sings. She goes on Thursdays or Fridays when she has half-day classes and she sings. These people come out of the woodworks when they see her walk in. The nurses and doctors look at her and tell her that her singing is better than the actual medicine they are giving. And she sings in Hebrew, German and Russian. These people that have Alzheimers and dementia, you wouldn’t know that they had it because the music makes them come to life.” Campbell is a proven test subject where music is the impetus.

Campbell plans to continue pursuing a music career and is undaunted to carry the message that music is essential. Her mother is fully supportive and inspired by what she has accomplished. “This is what she wants. She’s got the emotion, ability, talent and the will. She’s done it herself, and yeah, mom’s there to support, but If you want it, you have to do it on your own and she did.”

You can learn more about ways to donate to CDMOD here: