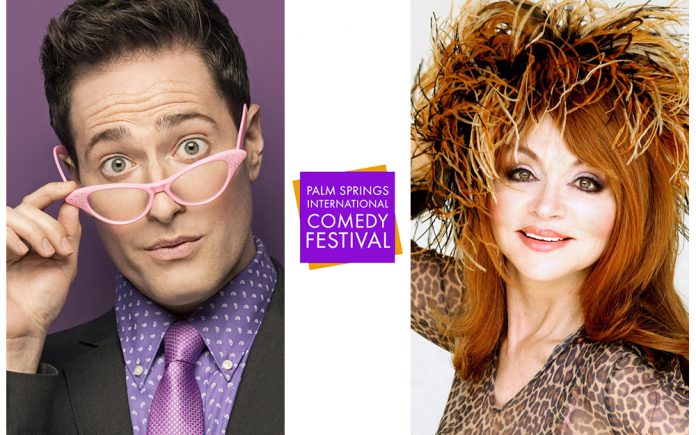 The Palm Springs International Comedy Festival kicks off on Sunday October 11th, which not only happens to be ‘National Coming Out Day,’ but LGBTQ+ History Month as well, and this year’s fest offers quite a few of your favorite LGBTQ+ Stars that you won’t want to miss!

On Tuesday, October 13th, the one and only Bianca Del Rio, RuPaul’s Drag Race winner season 6, is set to receive the PSICF ‘Trailblazer in Comedy Award’ from the Palm Springs International Comedy Festival. As a famous Drag Queen Comedian, Bianca’s stand up shows have sold out around the world and she was the first drag queen to headline Wembley Stadium!

The gala, usually done live at their annual Black Tie, Red Carpet, Dinner Awards event in Palm Springs, where tickets are usually quite pricey, are doing their awards live this year due to the pandemic. Festival viewers will get to see all PSICF Gala Award Honorees accept live, for free, during the festival’s regularly scheduled programming, including Bianca.

Streaming in the film festival portion, you can catch Michael Cimino, star of the Hulu series Love Victor based on the hit film Love Simon and from the New Line Cinema film Annabelle Comes Home with Patrick Wilson and Vera Farmiga. Michael has a PSICF Official Selection short film titled No Child Left Behind in the fest, directed by Benjamin South. Thorgy Thor & Phi Phi O’Hara of RuPaul’s Drag Race can also be seen in the hilarious TV Pilot A Sip with Vodka: The Russian Guide to Becoming A Real Housewife & Making It in America.

And well-known gay comedian Tony Tripoli debuts his hilarious world premiere comedy special Tony Tripoli: LIVE from Palm Springs! on Saturday October 17th.  Tony was the writer and producer of E!’s Fashion Police with Joan Rivers and was also recurring on Life on the D List with Kathy Griffin.

Returning Judge Anne Ramsay – Actress Mad About You, Bombshell, The L Word & Planet of the Apes, is back again this year. She helped select last year’s PSICF Stand-up fest winner, Renaldo Evan’s, whose one-hour comedy special also premieres at the festival on opening day. New PSICF Judge Jai Rodriguez – Host, Singer, Actor of Malibu Country & Queer Eye for the Straight Guy, is also on the panel helping to look for the next funniest comic.

Additionally, the festival features their famous stand up competition with over 100 comedians, which also has fantastic LGBTQ+ talent in it, all vying for the $1,000 Cash Prize, the coveted ‘Best in Fest Award,’ and a chance to have their own comedy special produced (pandemic restrictions pending). This is looking like the LGBTQ+ Celebration of the month! More celebrities and events are being added daily.

Part of the festival’s proceeds will go to benefit various pandemic related charities. For tickets and more information go to www.psicf.org.