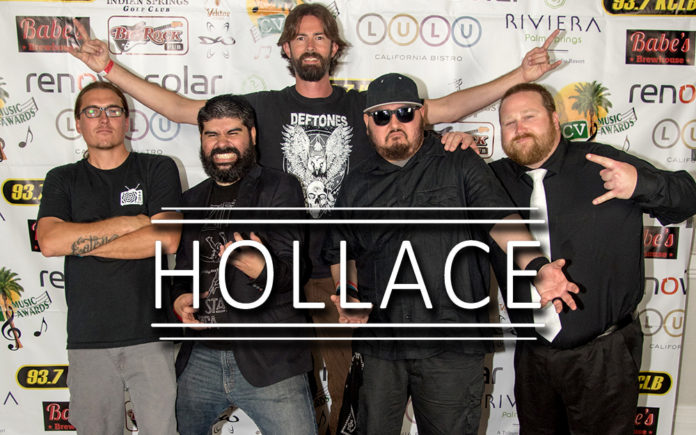 Local band Hollace played their first show in the Coachella Valley after a long hiatus at the CV Music Awards on Sunday. The band, which comprises singer Alex Antonio; Frank Michel on the lead guitar; James Hollis Eaton on the rhythm guitar; Shawn “Stretch” Fisher on the bass; and Josh Ballard on the drums, was nominated for best rock band. “The reason the band has been on hiatus is because I was diagnosed with brain cancer last October, shared Alex. “It’s been a battle ever since. Mostly good days, but there have been some bad days, but I’m just taking it day by day and that’s all I can do.” Though it wasn’t a full length performance, the band performed their song “California Sons” with the same charisma and chemistry that sets them apart. They then segued into “Black Hole Sun” as a tribute to Chris Cornell. Hollace also performed on June 30 at Craft Hill in South Pasadena.

CV Weekly: How has the break affected the band?

Hollace: “We didn’t know what to expect with Alex’s situation.  We were just hoping the best for Alex and not really sure what it was going to mean for the band. We weren’t sure he would even want to do it anymore after this experience, and were aware that we might not have this band anymore. We would’ve totally understood if that was the case, but he’s been recovering faster than expected and still wanted to keep singing. The band is stronger now.”

CV Weekly: What do you think most contributed to Hollace’s quick and continued success?

What are you most proud of?

Hollace: “The fact that we mesh so well when songwriting makes finishing songs pretty easy and has contributed to quick success. We don’t work very hard to finish songs or to come up with new ones. It just kind of happens. We are most proud of the fact that apart from writing our own songs, we have recorded, produced, mixed and mastered our EP and upcoming album ourselves.”

CV Weekly: Tell me about the show you played recently in Pasadena. How did it go and how was it playing together again?

Hollace: “The Pasadena show was good to get ourselves back in the mix playing live. The owner of Craft Hill where we played liked our music and said he would be in contact for future shows so we were excited about that.”

CV Weekly: How does it feel to be nominated for Best Rock Band in the CV Music awards? Are you looking forward to playing there?

Hollace: “It feels great to be nominated for Best Rock Band. We got to play last year for the awards and took home Best New Band. That was a great experience for us and we’re definitely looking forward to performing again for the CV Music awards.”

CV Weekly: What are your goals for Hollace?

Hollace: “Goals for the band are to get back into performing shape as we were before and really go for it. We had quite of few shows booked in and out of the Coachella Valley when Alex went down and we’re looking forward to filling up our calendar once again.”

CV Weekly: What inspires your music/lyrics? What is the songwriting process like?

Hollace: “We all have different backgrounds and inspirations and we all enjoy the music that comes from that. Alex writes the majority of the lyrics as our singer. As far as the process, there’s been a few songs that have come from Frank and Alex having jam sessions such as with ‘Blue Flowers’ and other times just the whole band jamming and ideas coming out in the moment such as with ‘Peace Loves a New Day.’”

CV Weekly: What’s next for Hollace? Are you working on new music, planning on playing more shows, releasing an album?

Hollace: “As we start playing again and Alex continues to gain strength in performing live, we look forward to releasing our full 10 song album later this year and maybe setting up a tour along with that.”

Last year, Hollace won Best New Band at the CV Music Awards and first place at Fortune Finder Music Group’s annual “Summer Showdown: Battle of the Bands” in 2015 and their fans are looking forward to their return. Hollace’s next performance will be at Katie Jakes Bar and Grill in Covina, CA. Their music and calendar of future performances can be viewed at reverbnation.com/hollace.