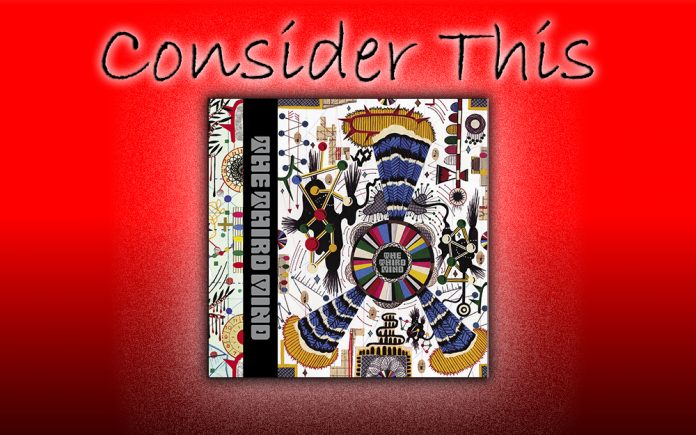 “Super Group” is a term that gets over-used in the music industry. A bit of helpful hyperbole meant to signify the merging of artists that each bring something indelible to the table (or recording studio). But not every (alpha) Wolf-Pack of players coalesce like the Traveling Wilburys. Sometimes all you get is Chickenfoot. That said, The Third Mind is a Super Group in the truest sense of the word. The members may not be household names, but they should be.

Dave Alvin is probably best known for forming The Blasters with his brother Phil back in the late ‘70s. The brothers were raised in Downey, the L.A. bedroom community that was the center of the aerospace industry after World War II. It’s also the hometown of the Carpenters, the brother-sister duo who had a string of mellow hits throughout the ‘70s. Dave and Phil’s musical influences were less wholesome. During that same era, an older cousin turned them on to the sounds of Blues, Folk, R&B, Country and Rockabilly, they quickly became obsessed.

Throughout their teens they made weekly pilgrimages to L.A., haunting independent record stores and frequenting legendary clubs like the Ashgrove. Not only did they witness great performances from celebrated Bluesmen like Lightnin’ Hopkins and the Rev. Gary Davis, they were befriended by personal heroes like Big Joe Turner and Muddy Waters.

As the 1980s dawned, they were fronting the Blasters. Taking full advantage of L.A.’s fertile club scene they shared stages with everyone from Black Flag and the Gun Club to X and Los Lobos. They established a Roots Rock sound that incorporated their myriad influences and was seasoned with a jolt of Punk Rock energy. Phil was the lead singer, but Dave began earning a reputation as an accomplished songwriter and adept gunslinger. All told, the band recorded four excellent long-players and an EP before Dave left the band, mostly so he could sing his own songs. After a brief stint with X, he went it alone.

His solo debut, Romeo’s Escape signaled the beginning of a critically acclaimed solo career that has included 11 studio albums and a couple of live collections. In recent years he has found time to make two albums with his brother, Phil as well as collaborate with legendary Texas singer-songwriter Jimmie Dale Gilmore.

Bassist Victor Krummenacher is a founding member of Camper Van Beethoven, and it’s offshoot, Monks Of Doom. With the former, he has recorded 10 albums, with the latter, seven. He has also released 10 albums as a solo artist. On the non-musical side, he has worked as the art director for the San Francisco Guardian and as a managing art director for Wired magazine.

Multi-instrumentalist David Immergluck (umlauts are apparently optional), has played with several high profile artists beginning with Camper and Monks Of Doom. There was a lengthy stretch touring and recording with John Hiatt. He has played on every Counting Crows record since their 1993 debut and as a session musician worked with everyone from Joseph Arthur to Hootie & The Blowfish, Joan Osborne and Cracker. In 2001 he was nominated for a Grammy for John Hiatt’s superlative Crossing Muddy Waters.

Michael Jerome is a world-class drummer who first gained prominence in the ‘90s as a member of The Toadies. He has been behind the kit for British Folk-Rocker Richard Thompson since 1999. He has also played with Blues Harp legend, Charlie Musselwaite, Velvet Underground founder, John Cale and Neo Soul progenitor Me’shell Ndegeocello. Special guests include singer-songwriter Jesse Sykes adding vocals and guitar, along with X drummer DJ Bonebrake on vibes and Jack Rudy on harmonica.

The inspiration for The Third Mind happened several years ago after Dave read the Miles Davis biography “So What.” He became intrigued by the recording process that Miles and his producer, Teo Marcero devised when they created seminal Jazz-Fusion albums like Bitches Brew and Jack Johnson, essentially, putting musicians in the studio, jamming in one key, locking into a groove and improvising. During the editing process, the music was shaped into songs. He fantasized about doing the same.

More than a decade later, he mentioned the idea to his pal, Victor. It seemed so antithetical to Dave’s usual modus operandi that Victor thought he was joking. By 2018, they thought they might give it a shot. They quickly rounded up like-minded players, David and Michael, and the initial goal was just “loud fun.” They chose to record songs or compositions originally written in the ‘60s, that became fearless underground classics. The result is a tight six-song set that unfurls like an extended suite.

The record opens tentatively with Alice Coltrane’s “Journey In Satchidananda.” Written in 1970, by the Jazz pianist/harpist and widow of saxophone giant, John Coltrane, it was sharp synthesis of Middle Eastern music and Jazz, dirge-y and drone-y, but also somehow lithe and elastic. Shuddery guitars alternately rumble and quaver, latticing over swirly keys, menacing bass lines and a trippy tabla-fied beat. The vibe is billowy and languid, as the guitars rattle and fuzz, wah-wah and flange. Bloopy keys connect with a martial cadence as the outro fades.

“Dolphins” is probably the album’s most conventional track. Folksinger Fred Neil (best known for writing “Everybody’s Talkin’” which Harry Nilsson took to #6 on the Billboard charts), originally recorded this gorgeous lament in 1966. His number one acolyte Tim Buckley covered it a few years later. The only song here to feature Dave’s lead vocal, it opens with a cascade of jangly guitars, slinking bass lines and a tambourine shake. Dave’s rich baritone is equal parts honey and woodsmoke, nicely shaded by Jesse Sykes. The arrangement slips into a dreamy soundscape, revving slightly on the break as guitars sync into a rapid fire Taqsim, a technique usually found in Greek, Turkish and Arabic music. A deft anti-war anthem written during the Vietnam era, it’s timeless lyrics (sadly) still resonate today; “I’m not the one to tell this world how to get along/I only know peace will come when hate is all gone.”

“Claudia Cardinale” is the sole original composition on the record. The track is named for the striking Italian-Tunisian actress who stunned audiences in films like “The Leopard,” “8 ½,” “The Pink Panther” and “Once Upon A Time In The West.” The melody shapeshifts from a modal roundelay to a desolate Spaghetti Western, with echoes of the Who’s epochal “Love Reign O’er Me.” Keening electric guitar and sturdy acoustic riffs are tethered to a galloping gait. It’s something of a melodic sorbet, allowing the listener to cleanse their musical palette before the heaviosity of the album’s main course.

“Morning Dew” is next. This post-apocalyptic Folk song was written in the early ‘60s by Bonnie Dobson, but is probably most familiar as a staple of the Grateful Dead’s live repertoire. It opens hesitantly, as feathery acoustic guitars pluck out the filigreed melody. Jesse handles lead vocals, her haunting delivery is equal parts gossamer and grit, as lyrics quietly sketch out a doomsday scenario; “Where have all the people gone my honey, where have all the people gone today/Well there’s no need for you to be worryin’ about all those people, you never see those people anyway.” As the arrangement gathers speed stinging electric guitar collides with angular bass lines and an off-kilter beat. Dave and David’s guitars synchronize briefly, locking into a churning maelstrom. The solos are by turn squally and muscular, meandering through a series of aural switchbacks until the final stretch when Michael’s pummeling attack lifts the entire enterprise onto a different astral plane before doubling back to Jesse’s soothing vocal coda.

The Third Mind’s take on Paul Butterfield Blues Band’s “East West” is the record’s centerpiece. A thrilling Blues Rock, Jazz-inspired barn-burner when it was originally released by the Chicago five-piece in 1966. But Dave, Victor, David and Michael manage to take it to new heights. It sputters to life with rattlesnake-shake percussion, tripwire guitars and tensile bass lines, idling like a souped-up muscle car before truly kicking into gear. A locomotive rhythm anchors the first of several movements, spurred by prickly lead guitar, gnarled rhythm guitar, sinewy bass and smoky harmonica. Leapfrogging through changes, this Raga-fied, Blues-Jazz-Psych workout flickers and flutters, folding back in on itself before charging forward, full-speed ahead.

A second wind arrives at the six-mark as guitars eddy and pool, see-sawing around honking harmonica and a punishing beat. A bumblebee’d Blues Harp solo buzzes atop crashing drums and shimmery guitars winding down, and then suddenly roaring back to life. It slips into stuttery, kinetic beat, layering in finger-poppin’ bass and guitars that alternately wah-wah, sparkle and scorch. It reaches a crescendo around 11 minutes in before deep diving once again, adding plinky-plunky piano and shifting into a tsiftatelli groove that’s most commonly found in Greek or Turkish music. Guitars swoop and dive as circuitous piano notes envelop the melody. A final ascent offers a master class in calibrated chaos, surging to a close with sitar-riffic guitars. Although it clocks in at nearly 17 minutes, it whizzes by with a blink of an eye, leaving the listener spent and satisfied.

Powered by skronky guitars, prowling bass lines and a walloping backbeat, vocal duties are deftly managed by David. His sneering delivery rachets up the intensity, fleshing out paranoid lyrics that, ironically, mirror the country’s current emotional climate; “You find no peace, it doesn’t cease, It’s deadly irritation/It keeps you blind, it’s there behind your every hesitation, it holds your thought, your mind is caught you’re fixed with fascination/You think you’ll die, it’s just a lie, it’s backwards elevation!” This version is both brainy and brawny, shards of guitar rain down on the explosive break, hurtling the song toward a combustible finish.

What began as a “crazy idea” from Dave, has translated into a stellar debut. No one could have predicted that the King of Roots Rock, along with some old (and new) musical compadres could successfully fuse a modern Jazz/Blues/Psychedelic synthesis. They managed to sidestep the typically self-indulgent Jam Band aesthetic, and the result is lean and economical sound. By paying homage to their musical heroes, and following their collective muse, The Third Mind has come up with something fresh and exciting. Most importantly, this music truly swings.