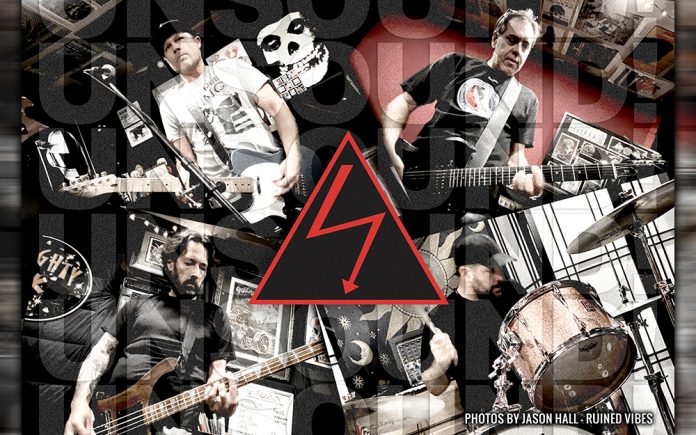 It’s the quinquennial event you’ve been waiting for. Yes, it’s been about five years and now it’s time for another dubious Unsound show in the desert. If you’re not familiar with Unsound, let’s just say without them, our desert music scene would be much less bona fide and we would likely have taken a left turn into a blind alley.

Billy Cordell (Decon, The Whizards), Ian Taylor (The Adolescents), Brian Maloney (Decon) and Jeff Bowman (Mighty Jack, Waxy) will provide an encore performance at The Hood Bar and Pizza on Saturday, 11/23/19 at 9 p.m. The unreal line-up will include Fatso Jetson, All Souls and Herbert! Tickets are $10 and can be pre-purchased at The Hood at 74360 Highway 111 in Palm Desert, California.

Coachella Valley Weekly reached out to the members of Unsound for an exclusive interview.

Maloney: “It’s been about four of five years since the last one. After our initial break-up in ’94, we didn’t play a show for like 15 years, and after our first reunion show we had such a blast that Ian and I made a pact to try and play every so often. Keep the good times rollin’ right ? Besides we don’t want to keep you guys hangin’ too long!”

Bowman: “It’s been a few years since we last played, so it just felt like it was time. We wanted a night and a venue that we could make our own, and Nigel Dettlebach and Brad Guth at The Hood have been on board and very accommodating. We’re looking forward to an awesome night!”

Taylor: “Time to rock! Seems to be a five-year itch.”

CVW: Fatso Jetson, All Souls and Herbert are on the bill as well. That seems easy; two phone calls, one to Tony Tornay and one to Herb Lienau. Seriously, those are some heavy hitters. What can you tell us about those three artists that we don’t already know?

Maloney: “Tough one, maybe how far we all go back, to high school in 1980! Tony was Unsound’s roadie for a while!”

Cordell: “Tony’s dad is a lifesaver, cherry not lemon and Herb wears a reflective vest when riding his bicycle.”

Taylor: “We like to have the people we looked up to as young punks be involved in anything we do. Mario and Herbert, no-brainer. All Souls seem to be doing something new and kick-ass.”

CVW: From my perspective, all four of you are significant figures in our musical past and your relevancy has not waned. Your names continue to cross the lips of a lot of us in our daily dealings. What does it take to become such an icon? In other words, are you aware of your place in desert rock history and where does the humility come from to deny that fact? 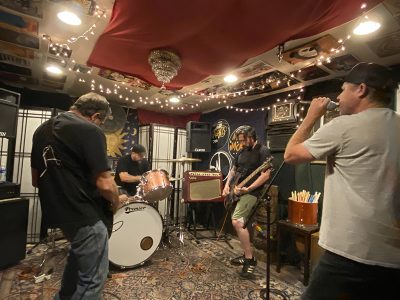 Cordell: “I don’t know, my interviews were cut from the movies, humility might start there, jk. It has always been about the music and friends. Creating and communicating through music is a special bond. Four people in a room together takes a lot of commitment. The music is the outcome that means the most for me, not labels.”

Taylor: “Stick to your guns. If the music is in you, keep playing. Icon…? I don’t know much about that. Hah!”

Maloney: “We’re aware. Unique sound/style and solid players. We might be humble about it, but we know we paid our dues. All the times we played in the dirt for free, or found a new club or bar to rock at around the desert. Unsound carried the torch for a while for Desert Rock when a lot of the bands moved out of here. We don’t deny it, we know what we did. Integrity is important.”

Bowman: “First off, thanks for that complimentary lead-in to the question. For me, the opportunity to play in Unsound taught me right off the bat that working hard, being prepared, doing my best and being grateful is the key to success. I’ve tried not to steer away from that formula with most things that I’ve done since.”

CVW: Have we heard the last of “new” Unsound music?

Cordell: “Most likely, but who knows.”

Bowman: “More than likely, but who knows?”

CVW: Pop Quiz: Which of these is true of “Unsound”?

Bowman: “The answer is e. all of the above…plus, Loud, Hard and Fast!”

Maloney: “We used to say, ‘Unsound mind and body’. We got the name from a line in Apocalypse Now, ‘…his ideas, methods became unsound.’”

CVW: We lost Britt Killen in ’11. You lost a brother and bandmate and his wife and daughters lost a wonderful husband and father. What do you do to keep his spirit alive and what do you miss most of his physical presence?

Cordell: “I miss his personality. He was hilarious and knew how to throw some good liners at Brian. Brian has good comebacks. So watching the two go off on each other was good comedy. I miss seeing that interaction. Part of the reason I’d go hang out at practice at the Washington house was to watch this. We had the same midnight blue color ’85 Rickenbacker. I let him borrow it the last time he played. I left the blue on it when I customized it due to unnatural causes (RP). It always reminds me of him and his style of playing so I always play it when we play.”

Taylor: “He is with us in everything we do. I keep in touch with his sweet Mom, JO. Britt was UNSOUND to the bone. His humor, he was a beautiful human and a constant prankster. He could talk more shit than anyone I’ve ever met.”

Maloney: “Britt’s memory comes back to me anywhere I go in the desert in old haunts, places he lived, we played, pictures and in Unsound recordings/videos.”

Bowman: “There were two Brits. I loved one of them, and miss him. He was a kind, funny spitfire kind of a guy. Sadly, that Brit didn’t really show up the last time we were all together, so it was a bummer. Fortunately Brit gave us his blessing for Billy to be our bass player, and so his legacy lives on through him, and Billy really does it justice.”

CVW: What are the chances that this is the first in a string of shows here and beyond?

Cordell: “Depends on if the rider is complete.”

Maloney: “We still have the itch to rock, so chances are good we’ll be playing a little more often.”

Bowman: “I’m always down to play, if we decide to. I’m just happy I can still play this kind of music with any sort of power! I actually broke a stick at practice the other night…I’ve still got it! Now that we’ve knocked the rust off again, I would love to keep it going, but I hold my breath for nothing.”

CVW: What are you guys up to both professionally and for self-gratification?

Cordell: “Retired from touring, I own Bliss Chakra Spa in Palm Desert and perform sound baths, sound healing, and run the business. Take care of my health and enjoy life with my wife and kids and get outdoors as much as possible.”

Taylor: “I’m writing and touring with The Adolescents. Running my biz Taylor Design and Build and raising two kids keeps me pretty busy.”

Maloney: “Construction in the desert, husband and father.”

CVW: Here’s a scenario for you: A time machine disguised as a phone booth lands in 2019 and your younger selves (20/21) step out. You get two minutes with them to present some sort of synopsis of the future and what they should and shouldn’t do. How would that conversation go?

Taylor: “Hey kid, keep up the hard work. Remember to take it all in and enjoy the moments, they are gone before you know it. Don’t destroy your body, wear skate pads and ear plugs. Buy lots of real estate and prepare for screens to rot everyone’s brains. Oh, and do what you can to avoid a gross, lame-ass reality TV star from becoming president of your country one day!”

Bowman: “I’d say, it’s a crazy ride, but it teaches you everything you need to know, so hang on tight and enjoy…it’ll all work out! Oh, and that the L.A. Kings will suck for 20 years straight, but put all your money on them winning the Stanley Cup in ‘12 and ‘14…then watch out cause they’ll suck again!”

CVW: Without sounding too morbid, when it’s all said and done, what should read on the Unsound tombstone?

Cordell: “Here lies Brian’s amp…died of abuse and annoyed the fuck out of everyone’s ears!”

Listen to the new Kyuss World Radio interview with Unsound below:

“Unsound was my favorite band. When I was a kid, before the internet, before having a driver’s license and being able to go see bands out of town, they made music real for me. To see some of my friends’ older brothers play the exact sounds that I wanted to hear, it blew me away. It showed me that music wasn’t out of my reach. I loved that band so much that I used to bring tape recorders to generator parties to make horrible recordings of them because I didn’t want that to be the only place I could listen to them.”

“All Souls is done with our second album and we have a few big things coming down the pipe!”

“Unsound was one band that we always set up shows with back in the late 80’s-90’s. We are all friends and always look forward to playing together.”

“Fatso Jetson is currently on a small West Coast tour with 1000mods and Ape Machine. The desert show will wrap-up our tour at home. We have a show on November 29th at The House of Machines in Los Angeles to celebrate John Srebalus’ documentary Such Hawks Such Hounds.”

“We will be working on a new record early next year and are planning to return to Europe and touring the United States in 2020.”

“Well…I am opening for Unsound, Fatso Jetson and All Souls on 11/23. In all honesty, Unsound hasn’t affected or influenced me at all. Don’t get me wrong, I’ve always been a big fan of the band and friends of the guys. We (Dead Issue) were the wave before Unsound. Brian and Britt were a few years younger. I think they were Freshmen when I was a Senior at Palm Springs High School. We kind of took them under our Punk wing so to speak. If anything, we had a major musical influence on them. I’m sure Brian would concur. They later formed Scabies Babies with Tony Brown and Mark Grier. I think Tony was a year behind me. Dead Issue was the ‘IT’ desert Punk band back then. No question; Unsound picked up where we left off…after abdicating the throne! No bragging, just facts. I hope I don’t sound like a douche, ha ha!”

Contact HERBERT on social media or send $12 postage paid for CD or link to digital download for $10 at link below.