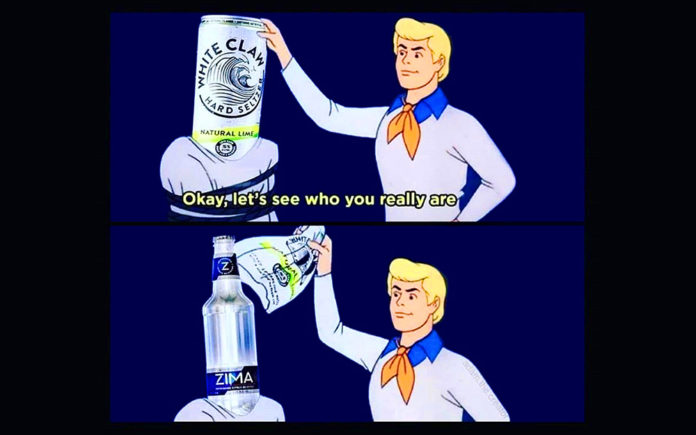 *Disclaimer here; I was 16 at the time I first discovered alcohol, but I do not condone underage drinking in any situation. Like most kids, I wanted to do adult things and act older than my age, so I partied and did stuff that would have given my parents heart attacks had they known. None of my story is a glorification of teenage drinking. In fact, if my imaginary kids wanted to be a teetotaling prohibitionists who go their entire lives without a drop of alcohol besotting their livers, I’d be ok with that. That’s just cash saved on potentially having to post bail and/or credit-card-funded trips to recovery centers, ‘cuz lord knows what having me as a dad would do to a young mind. Anyway, on with this week’s Brewtality..

Back in the wastelands of the mid-90’s, the same year the Stone Brewing Company fired up its kettle for the first time and banged out their inaugural batch of Pale Ale, I was drinking the shit out of Zima. Clear, sparkling, and tasting like someone put Sprite in my eucalyptus cough syrup flavored vodka, the only thing more awful tasting than Zima was beer. Now, what I’d really wanted to drink were those hella delicious Bartles & Jaymes wine coolers, which was the first alcoholic beverage I ever caught a buzz off of, but those were clearly made for chicks. This was the 90’s and there were clear delineations between what was considered masculine or feminine. Wine coolers weren’t anything a self-respecting young buck wanted to be seen drinking, but Zima looked and tasted slightly less girly, and that was good enough for me.

When Zima rolled out in 1993, transparent-anything was in vogue. Everyone was swilling Crystal Pepsi and swiping Mennen Crystal Clean deodorant under their armpits. Rock bands were playing clear acrylic drum sets and guitars. The Miller Brewing Company had tried and failed to capitalize on the see-thru trend with their “Clear Beer” which was just a light lager that was run through charcoal filters until all of the color and flavor had been stripped out (you can buy 27 year old cans of the stuff on eBay for dirt cheap if you want to know what sadness tastes like). The Coors Brewing Corporation unveiled their version of Clear Beer, named after the Russian word for Winter, Zima. They put tons of dollars into marketing, and managed to build up a pretty impressive hype machine behind its release. When it finally hit the shelves of grocery store and bars, everybody wanted to try it, and Zima sold an astounding 1.3 million barrels of product in 1994. But just like anything else that garners mass attention before failing to live up to consumer expectation, sales dropped off rapidly. And that was due in large part to the wretched flavor of Zima.

You see kids, without fruit flavoring to cover up the medicinal taste of fermented corn syrup, “malternative beverages” taste like prison cafeteria mop water. People bought their first Zima and never went back for a second. By 1996, Zima sales had plummeted to 403,000 barrels, and the company soft-rebooted its formula to improve the taste. By the time I’d popped the top on my first fluted bottle of the see-thru stuff, Zima tasted like a mix of 7-Up and watered down Popov vodka, which was already a flavor I was familiar with. The Korean lady who owned the liquor store down the street from my house liked me [and my business] and would always ask me as I laid my boozy purchases on her counter, “And you are 21, RIGHT?” to which me and my scraggy, sparse, purposefully cultivated facial hair would reply, “Oh heck ya I am-pffft, It’d be weird if I wasn’t.” And she’d sell me all the Zima, Popov, and Boone’s Strawberry Hill I had money for. Someone had to get booze for the house parties, and that someone was me.

I was a shameless, underage fan of Zima, and later, the equally as repulsive tasting (yet still not grimace inducing to my young taste buds as the taste of beer) Smirnoff ice, and I only lost my taste for alcopop beverages when I made friends with a German dude who mocked me endlessly for liking “girly drinks” (say that with a ‘Hanz and Franz’ style fake German accent if you want the full effect of the razzing I received). He promptly introduced me to Warsteiner German Lager, and I drank the stuff in a Stockholm-Syndrome like state until I liked the taste of beer (so, wherever you are Tomas, thanks for steering my alcohol addiction the right way).

Zima is no longer, having been retired by government overregulation and taxation, but the beer alternative did pave the way for summer 2019’s breakout drink/meme, White Claw. More on the connection between the two malternative monsters in next week’s article!