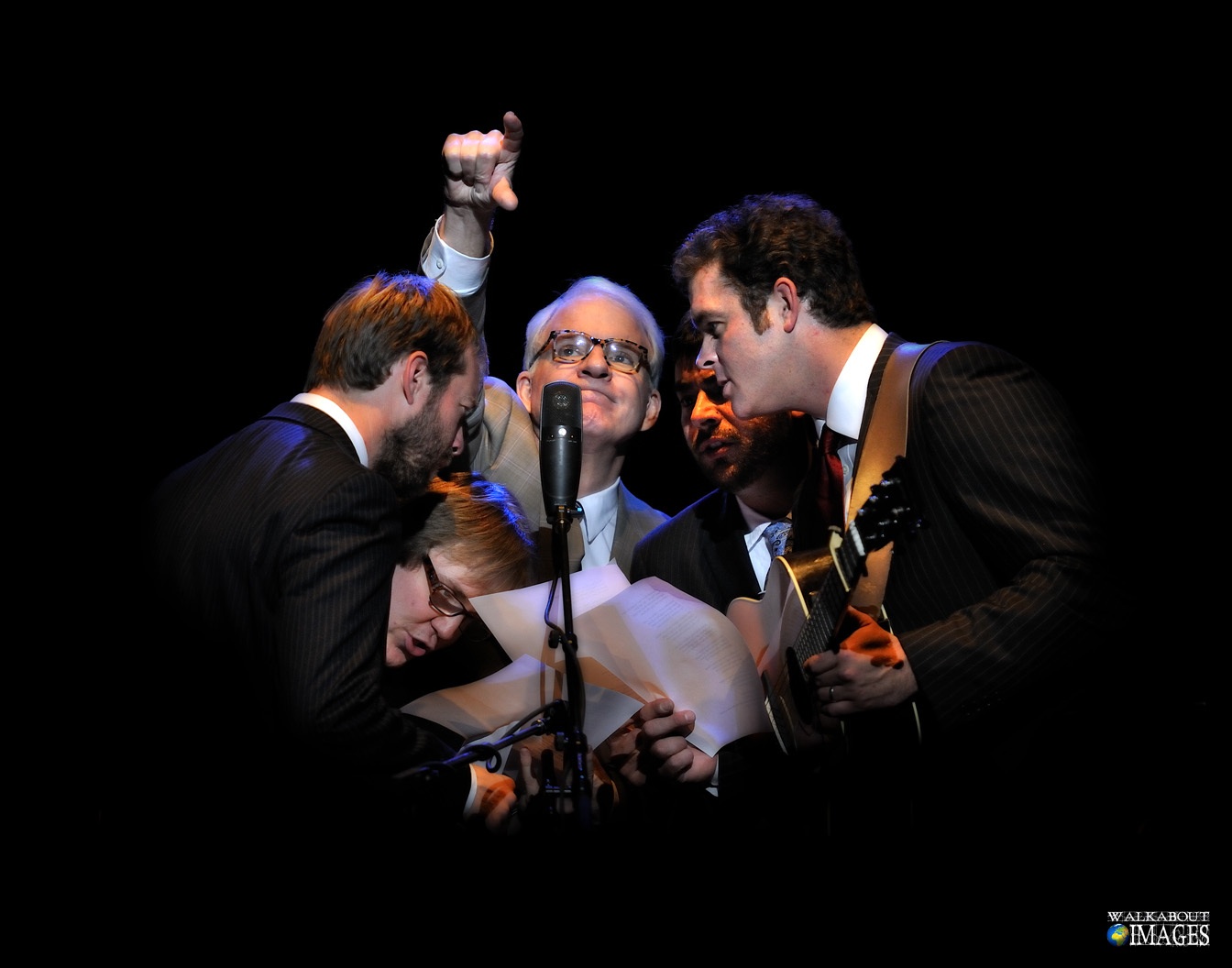 If any modern artist in the pop-culture pantheon deserves to be bestowed with the title “Renaissance Man,” it is Steve Martin.
Not only is he an author of novels and novellas, screenplays and short humor pieces; he is also a playwright, an actor, a magician, an art collector, a juggler, a singer, a songwriter and a banjo player. Oh, he’s also a comedian.
Those last four talents will be on display when Martin appears with his band, the Steep Canyon Rangers, at Stagecoach. Other headliners include Brad Paisley, Jason Aldean, Miranda Lambert, Blake Shelton and Alabama.
The appearance follows last year’s release of Martin’s CD of collaborations with the Rangers, a well-respected bluegrass quintet that has recorded a number of albums on its own (including a new album just last month). Rare Bird Alert (Rounder), the joint Martin/Rangers release, reached the No. 1 spot on Billboard’s Bluegrass chart in 2011, as did its 2009 predecessor, the Martin solo album The Crow: New Songs for the Five-String Banjo, which also won a Grammy Award for Best Bluegrass Album. Martin is surely the only performer to win Grammys in both bluegrass and comedy categories.
Though he’s devoted much of the last couple of years to bluegrass music, playing the banjo is certainly nothing new for Martin. He started playing at age 17 and later incorporated the instrument into his standup comedy act. By the time he released his final comedy album, 1981’s The Steve Martin Brothers (Warner Bros.), only the first side actually consisted of his standup act; the second side was devoted to live bluegrass.
He said that in the years since, he’s never stopped playing banjo—but he’s currently devoting more time and energy to bluegrass music than he ever has before.
“It was completely by accident,” he said. “You know, I always kept up the banjo, but there’s no comparison to keeping it up sort of casually and then keeping it up by playing onstage every night. You just get better and better and better. But it was a real accident.
“First of all, it was the Internet. The first thing that really got me back into it (is) I was able to find the records again. And I started searching the Internet to find, ‘Hey, what’s new in the banjo world?’ … And I identified some players who were new that I’d never heard of. And I actually contacted them just to say, ‘I really like your music.’ And then people started sending me music. And then I started meeting the people.”
One of those musicians, Tony Trischka, conjured the cojones to ask Martin to play on a double-banjo album he was working on at the time, specifically to duet on a standard. But Martin had no interest in playing standards. Instead, he played some songs for Trischka that he had written himself—until Trischka said, “That one!”
“And it was the song ‘The Crow,’” remembered Martin, “and he put it on his record and it became this … tiny hit in the bluegrass world. And then I thought, ‘Well, I have some other songs, and I’m not getting any younger. Maybe I should just record them on a record.’ And that’s what I did.
“And it became a No. 1 bluegrass record and won a Grammy,” he said, laughing.
Prior to his current success, musically, Martin was best known for his 1978 novelty hit “King Tut,” which made it all the way to No. 17 on the Billboard Hot 100 chart. A live bluegrass version of the song appears as the last track on Rare Bird Alert.
“I thought it would be funny to do a bluegrass version of it,” he explained. “It just seems so silly. But you know, I don’t always do it in a show. I do it every once in a while. And I really put it on the record because I wanted the audience to know that our show was fun, that it wasn’t just me standing with my back to the audience playing music.”