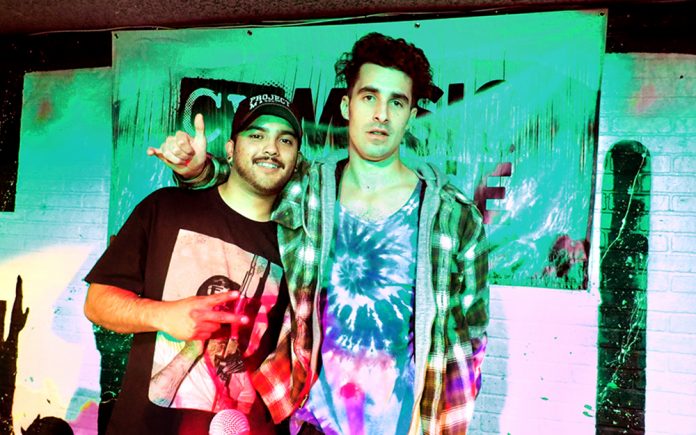 The 5th annual Coachella Valley Music Showcase continued on March 8 at the Hood Bar and Pizza with a hip hop-infused set of four talented local acts hoping to make it to the next round of the competition: Aloe Chat, Kurlzzz, 2Toxic, and T-Lick. The panel of judges for this round included 5th Town vocalist Chelsea Sugarbritches, owner of Melrose Music in Hollywood and Palm Springs David Williams, Hollywood movie mogul and director of the recently filmed PayDirt Christian Sesma, and Talent Buyer/General Manager for Empire Music Ventures Kristen Reinhagen Ortiz.

The night started with the first-ever live performance from Aloe Chat, a comedy-based rap group that captivated the crowd with their clever rhymes and verses. Filling the stage with a vivacious energy, Aloe Chat maintained a youthful, green aesthetic that was consistent with their coordinated wardrobe color palette and their set lights. Their rap was infused with a tongue-in-cheek kind of humor that kept the audience anticipating the next line, followed by an approving sound of laughter that echoed throughout the entire bar. The judges were overall pleased with Aloe Chat’s debut performance, even mentioning that it was one for the books despite being their first time playing in front of The Hood crowd.

“I get major Cypress Hill vibes from you guys, and you definitely killed it tonight with your energy and just the way you played off of each other so well,” praised Chelsea Sugarbritches at the judges’ table.

The next act of the night was Kurlzzz, a crowd favorite and newcomer in the desert hip hop scene who was accompanied by a DJ as he hyped up the Sunday night bar crowd and engaged them with his upbeat line deliveries and high octane energy. His command of the audience was executed noticeably well. The judges were just as impressed with the enthusiasm the crowd expressed for Kurlzzz’s performance.

The next music act in the showcase was Carlos Cruz, better known by his stage name 2Toxic. Being a seasoned veteran in the Coachella Valley hip hop scene, 2Toxic demonstrated his comfortability on stage with some doses of R&B melodies mixed with his rap verses. The crowd was familiar with 2Toxic’s tracks, and responded excitedly to the artist’s fresh sound and upbeat lines, ranging from personal statements of love for a significant other to a pledge of looking after his children.

The final act of the showcase was T-Lick, a solo hip hop artist that was fluid and slick with the delivery of his verses. He spat out rapid fire lines that captured the audience’s attention easily. His command of the stage was ever present, even as he brought additional guests up with him to add more dynamic to his performance. The judges were very impressed with his performance, even admitting that they did not anticipate that level of skill to be displayed.

“Throughout your set, I kept thinking, ‘where have you been all my life?’ And when I say all my life, I mean the last 10 years I’ve been booking at the Date Shed. You have a sound all your own and more people should hear it too,” said Kristen Reinhagen Ortiz. 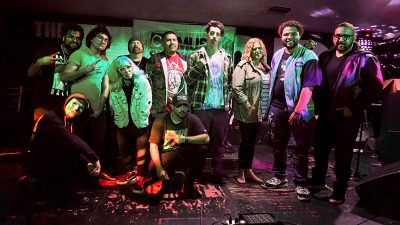 With all four acts having completed their sets, the judges deliberated to pick a winner based on a variety of criteria including songs, stage presence, and audience engagement. Although the participating acts all brought a unique energy to the crowd, the winner of the fourth round of the Coachella Valley Music Showcase was announced to be T-Lick. The rapper will continue on with a chance at the final showcase later this year, where the winner will be awarded a $2,500 cash prize and more.

“I’m so excited for my win, and I can’t wait to start preparing for the next round. That was my main goal for this performance: to progress to the next round. Now people can expect a more polished show next time because I’ll be practicing a lot,” said T-Lick.