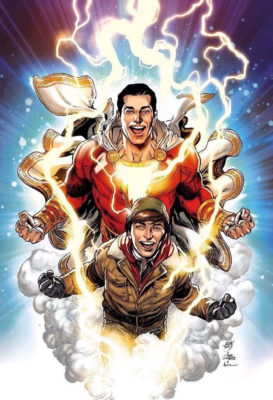 Horrormeister David Sandberg (“Lights Out,” “Annabelle: Creation”) directs Henry Gayden’s witty and heartfelt screenplay that expounds on the notion that we all have an inner superhero just waiting for the right magic to bring it out.

All 14-year-old brooding runaway Billy Batson (Asher Angel) needs to do to make that happen is shout one word “Shazam!” – courtesy of an ancient wizard (Djimon Hounsou) — to transform into the eponymous adult superhero (Zachery Levi).

Created in 1939 by Bill Parker and C.C. Beck.  Originally, Batson was given the name Captain Marvel, but that was later changed to Shazam for reasons too complicated to detail here.

In the beginning, Shazam delights in the new and more potent version of himself by doing what any other kid would do — having fun testing his newfound powers.  But there’s an opposing force out there in the form of evil Dr. Thaddeus Sivana (Mark Strong) who wants Shazam’s magical abilities for himself. 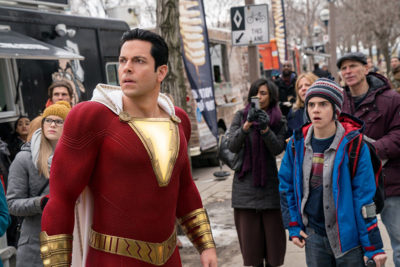 Shazam sets out to test the limits of his abilities with the joyful recklessness of a teen.  Can he skip school?  Can he fly?  Does he have X-ray vision?  Can he shoot lightning out of his hands?

Yes, but he’s going to have to master these awesome powers as soon as possible if he’s to fight the deadly forces of evil controlled by Sivana.

The satisfying but not cloying theme is as much about family – not necessarily the one you’re born with – as it is about super powers and defeating bad guys.  This is the perfect antidote to Christopher Nolan’s gnarly take on comic super heroes.

Is this funny and sweetly innocent movie is a sign that DC is ready to take on Marvel?

Billy and his foster siblings are actually fun to spend time with, and the film’s message of found family is a sweet one indeed.Strongest recommendation.  If you’re looking for an unpretentious, entertaining time at the movies don’t miss this one.  It’s full of heart and loads of fun.  You will laugh out loud. 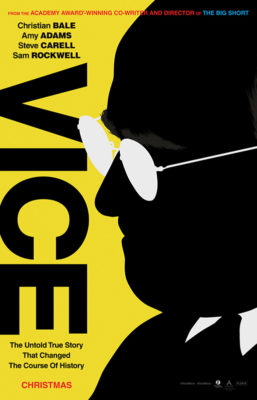 Writer/director Adam McKay is best known for comedies like “Anchorman: The Legend of Ron Burgundy,” “Step Brothers” and “The Other Guys.”

His movie about Dick Cheney examines the single-minded story of a driven, bureaucratic Washington insider who methodically became what many considered the most powerful man in the world as Vice-President to George W. Bush, retooling the country and the globe in ways that we still feel today.  It’s the story of us and how we got to where we are.

Intermittently shifting in tone, consistently inventive, darkly funny, this absurdist biopic is anchored by Christian Bale’s Cheney – a backstabbing, front-stabbing and with the “encouragement” of his wife Lynne (a terrific Amy Adams), a ruthlessly ambitious player.

This wildly entertaining film may be essential viewing for a fuller understanding of our contemporary history and current geopolitical quandaries.  It hits like Cheney’s accidental shotgun blast to his fellow quail hunter’s heart in 2006.

Love it or hate it, there’s no escaping the realization that we are indeed one of its characters.  The final moments cleverly include a faux but spot-on marketing study for the film we’ve just scene.

Rockwell costars Sam as “W.”  Limited extras include some deleted scenes and a Making Of featurette.  Twentieth Century Fox.  Recommended.