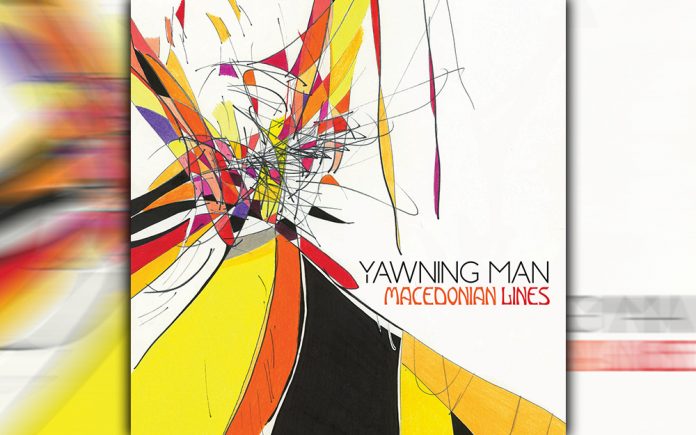 There’s no mistaking the sound of Yawning Man. Since the mid-80’s, they have presided over all that is Desert Rock and with the release of their most recent album, Macedonian Lines (2019), Mario Lalli (bass), Gary Arce (guitar) and Bill Stinson (drums) continue to authenticate their siege on our ability to symbolize the Yawning Man sound and formulate our own inferences from the lyric-less compositions.

The band recently performed at the Coachella Valley premiere of the critically acclaimed documentary film, Desolation Center, about the origins of the desert music and arts festival movement. The documentary, by filmmaker Stuart Swezey, is the previously untold story of a series of early ‘80s guerrilla music and art performance happenings in Southern California that are recognized to have paved the way for Burning Man, Lollapalooza and the Coachella Music and Arts Festival, collective experiences that have become key elements of popular culture in the 21st century. 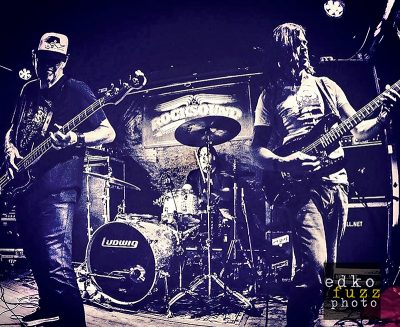 Influenced by everything from Psychedelic Rock to Jazz, from Hard Rock to Roots Punk, you could say the sound of Yawning Man is best seen with your inward eye and the state of mind is best felt with your innate intuitiveness.

Macedonian Lines was recorded at Gatos Trail Studio in Joshua Tree, California and released on Heavy Psych Sounds Records. It is 31 minutes of sophisticated musicality interlaid with fluctuating and vulnerable song writing. The fact that many of the songs were refined in a live setting then fulfilled in the studio shows their organic approach to instrumental music.

Lalli’s lush bass is the first indication of where we’re headed. If we could only view the scenes of the movie with this as the soundtrack, we could enhance our perception of Virtual Funeral. Arce’s easily recognizable guitar marches through progressions that lay on top of Lalli’s bottom and Stinson’s insistent drum fills. The piano is planetary and there’s a polychromatic-esque feeling of traveling through space.

The moderate tempo continues here. It’s the soundtrack to nature. Arce’s melodic finger-style guitar playing radiates here. The video is a transcendent time-lapsed video of images from the High and Low Desert. It includes shots of the night sky in Joshua Tree and views of what looks to be the San Jacinto Mountain range with live footage of the band interspersed. The song feels as if it was written for the ambient outdoors of a Greek kingdom.

The overcast bass and drum intro duplicates the song title. Once again, a dreamy-tempo song to build from. Once Stinson hits the hi-hats, the song takes on a different mode and once he returns to the ride the mourning is redistributed. There’s an ebb and flow of this track to be acknowledged. To the untrained ear, Arce’s playing can be mistaken for the soft playing of a piano; that’s the idiosyncratic style of his playing. I imagine the likeness of a sad princess who is neither happy nor sad.

Now this is the song that takes me to the desert. The passing of meteoroids as the almost painted landscape remains dormant. The absolute performance of guitar, bass and drums. This is why Yawning Man remains germane to the Rock world.

I’ll be sure to ask Lalli about the title to this song as well as its significance. Traveling in neutral here, Yawning Man is the thinking man’s band. The mirrors in the mind necessary to process and sympathize with this tune are many.

“Wierd” is right. The intro bass line on its own is spellbinding. Arce duplicates the melody celestially. Stinson’s faithful drumming allows for Lalli and Arce to move as they wish. The humble melody is contagious. When Stinson diverges from his timekeeping, he provides us a peek into the blatant passion for drumming.