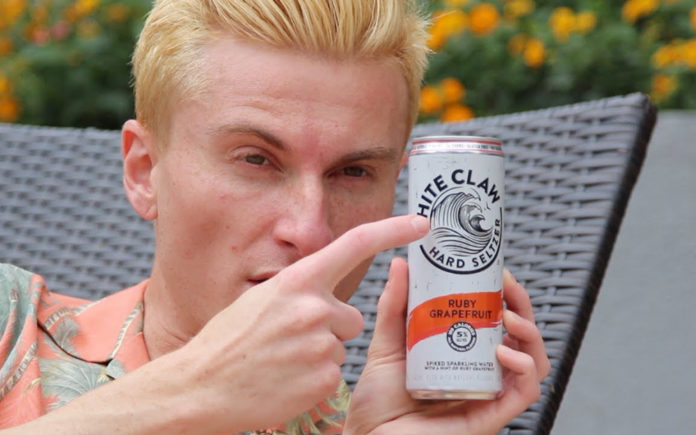 I picked up a 12-pack of Crispin hard cider the other day and let me tell you, it was delicious. Sure-sure, those skinny, cylindrical, rose gold and metallic periwinkle cans make them look like energy drinks in drag.   And sure-sure, hard cider isn’t what all the kids are drinking these days, but I wasn’t exactly left with a whole lot of options. The hard seltzer isle of my local grocery store was as barren and lifeless as Kylie Jenner’s frontal lobe. I’m gonna need surgery to fix my legs, cuz I can’t stand you hoes. You drank all the f*ckin’ White Claw.

Much like the Popeye’s chicken sandwich frenzy that had the pea brained among us dying to get their hands on an otherwise common and pedestrian menu item, viral marketing proved for White Claw that a firestorm of trending tweets can create demand where there previously was none. White Claw had been sitting placidly on store shelves for three years, occasionally enjoyed by drinkers who wanted a light and gluten-free alternative to beer, but otherwise indistinguishable from its peers in the hard seltzer shelf of your local Walmart. All of that changed on June 25th, 2019, when internet comedian, Trevor Wallace, uploaded a three-minute long sketch that simultaneously roasted and lauded White Claw, and created a cultural phenomenon in the process. 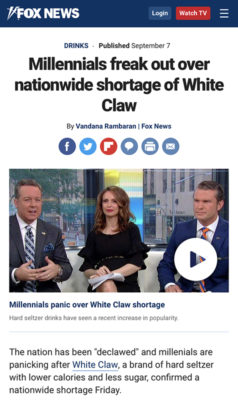 Embodying the zeitgeist of Generation Z humor, Wallace rattled off ironic slogans and dry-witted zingers in a video titled, “Drinks White Claw once,” where he coined the now nauseatingly overused catchphrase, “Ain’t no laws when you’re drinking Claws, baby.” The video begins with a black-garbed Wallace distractedly texting on his phone when he’s handed a White Claw. He curiously takes a sip, and is instantly transformed into a floral shirt and flipped cap wearing bastion of good times, explaining to listeners that White Claw is basically Four Loko that went to private school, and he only drinks the stuff on days that end with “Y” (“that’s all of ‘em, Margret, hah hah,” he explains to end the joke). Trevor Wallace did in three minutes what White Claw producer, Mark Anthony Brands could not do in three years; he made the product an instant status symbol of carefree, ironic enjoyment.

The video garnered Trevor Wallace millions of new followers across all platforms of social media, and soon, millennial soccer moms and Gen Z wanna-be influencers alike began posing on Instagram with their favorite White Claw flavors, aping lines from Wallace’s video. While hard seltzers held plenty of appeal for those wanting a benignly inoffensive alcoholic beverage, the White Claw brand now became synonymous with cool, a fun trend that was a joke everyone could be in on. While Boomers and Gen X’ers cautiously stayed away from taking part in the craze, they seemed to be the only ones not spending summer 2019 getting mildly buzzed on White Claw. And much like the much-maligned Popeye’s chicken sandwich, the viral trend turned nationwide craze caused product shortages, as consumers chased social media clout through product ownership. The proverbial shark had finally been jumped, as the Fox News organization declared in the clickiest click-bait headline ever, “Millennials freak out over nationwide shortage of White Claw.”

Apparently, we drank all the White Claw. Even the gross lime ones. And while every news outlet salaciously reported on this fact with glee, I have not been aware of a single riot or fight over the last remaining cans of the Claw. It’s as if everyone is as in on the shortage as they were the binge that led to it. Rival hard seltzer brands like Truly and SpikedSeltzer have no doubt seen an increase in sales, as Clawcasians settle for whatever Black Cherry flavored hard seltzers they can find.

Product reps are currently reassuring us that production facilities are working overtime to brew more Claw.