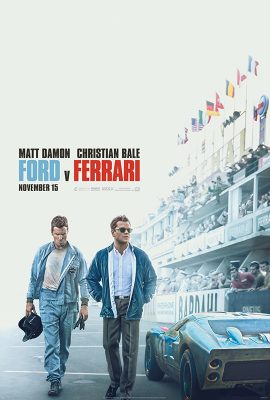 Academy Award winners Matt Damon and Christian Bale star in this character driven (pun intended) story of the visionary American car designer Carroll Shelby (Damon) and the fearless British-born driver Ken Miles (Bale), who together battle corporate meddling, the unbending laws of physics and their own private demons to build a revolutionary race car for the Ford Motor Company and take on the challenge of dethroning the domination of Enzo Ferrari’s race cars at the 24 hour 1966 Le Mans competition in France.

Director James Mangold revs up this terrific movie with a full-throttle emphasis not only on the visceral but also the complex motional elements of this memorable and surprising true story of a great friendship in this super-charged fact-based and immensely satisfying racing melodrama.

Damon and Bale are at the top of their game in this film that embraces traditional story telling tropes with a modern sensibility.  The longish movie takes its time letting us get to know these two strong character and their hopes, fears and dreams. 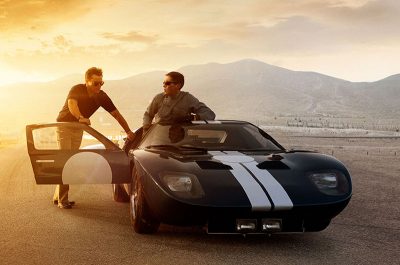 Damon is believable transitioning from a driver to head of a company.  But make no mistake; this is Bale’s movie.  He fully embodies the arrogant, disgraced driver that Ford does NOT want being the face of anything with their name.  Damon and Bale are perfect as antagonistic allies working together for their shared cause of proving wrong the engineers at Ford.

One does not have to be a car buff or racing fan to fully enjoy this exceptional film that’s more about friendship than the beautifully rendered racing sequences that include the incredibly visceral and terrifying experience of going 200 mph on a rain slick track!  This is certainly among, if not the best, racing film of all time. .Strong recommendation.

BLINDED BY THE LIGHT 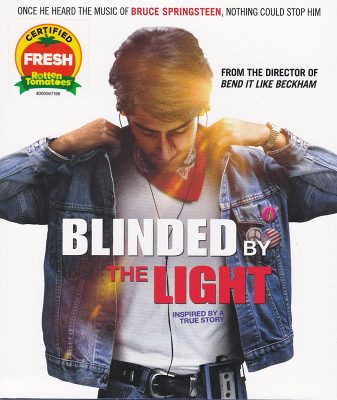 From writer-director-producer Gurinder Chadha (“Bend It Like Beckham) comes a surprising inspirational drama set to the music and lyrics of Bruce Springsteen’s timeless songs, a joyful story of courage, love, hope family and the unique ability of music to lift the human spirit.

Inspired by a true story, based on Sarfraz Manzoor’s acclaimed memoir “Greetings from Bury Park: Race, Religion and Rock N’ Roll,” Chadha’s film tells the story of Javed (Viveik Klra), a British teen of Pakistani descent growing up in the town of Luton, England in 1987Amidst the racial and economic turmoil of the times, he writes poetry as a means to escape the intolerance of his hometown and the inflexibility of his traditional father (Kulvinder Ghir).  But when a classmate (Aaron Phgura) introduces him to the music of Bruce Springsteen, Javed sees parallels to his working-class life in the powerful lyrics.  As Javed discovers a cathartic outlet for his own pen-up dreams, he also begins to find the courage to express himself in his own unique voice. 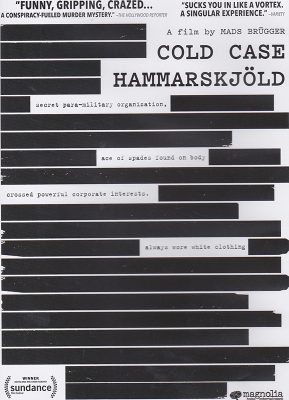 From Danish filmmaker Mads Brügger comes an investigation into the fatal plane crash that killed U.N. Secretary General Dag Hammarskjold on September 18, 1961 when he was headed to oversee cease-fire negotiations in Congo.

The crash killed all passengers on board.  With local residents reporting sights of a second plane and a red flash with sounds of gunfire, Brügger and his assistant, Swedish Goran Bjorkdahl, revisit the crash site and conduct in-depth interviews to find out whether the incident was a conspiracy to take down the U.N. Secretary General.  As Brügger discovers a crucial puzzle piece that could send shockwaves around the world, we realize that sometimes absurdity and irony are the emboldening ingredients need to confront what’s truly sinister.  Magnolia.