Just because some members of the Motion Picture Academy voted to nominate specific movies to be voted on as “best picture” doesn’t mean that picture is actually better than all the others releases during the year in question.  If movies are works or art, and I can make that argument, can one really be “better” than another?  Is a Da Vinci painting “better” than a Rembrandt?

And another thing, how are movies to be judged?  By their gross, significance or collaborative artistic merit?  I try and see almost everything but lean towards foreign and indie films.  I like films that have relevance and meaning, especially if they deliver an emotional impact and dazzling visual style.

Movies matter, especially in our chaotic and dangerous world.  They can remind us of who we are and what we are capable of for both good and evil.  Movies are our collective mirror.

2017’s movies that connected with me include: “GET OUT,” “WONDER WOMAN,” “LOGAN,” “THREE BILBOARDS OUTSIDE EBBING MISSOURI,” “WAR FOR THE PLANET OF THE APES,” “THOR: RAGNAROK,” “LADY BIRD” and “THE DARKEST HOUR.” 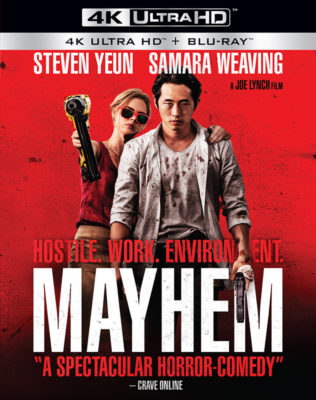 Derek Cho (Steven Yeun) is having a really bad day. After being unjustly fired from his job, he discovers that the law firm’s building is under quarantine for a mysterious and dangerous virus. Chaos erupts throughout the office as the victims of the disease begin acting out their wildest impulses. Joining forces with a former client (Samara Weaving) who has a grudge of her own, Derek savagely fights tooth and nail to get to the executives on the top floor and settle the score once and for all.  Variety called Mayhem a “smartly constructed and sardonically funny indie with attitudes that somehow manage the tricky feat of being exuberantly over-the-top even as it remains consistently on target.”  I couldn’t say it better.   RLJE Films. 4K UD.

Director George Clooney tries too hard to mix social satire, racial commentary and a murder mystery.  The final result is not boring, but less than it sets out to be.

The idyllic town of Suburbicon is a perfect place for Gardner Lodge (Matt Damon) to make a home.  But beneath the tranquil surface lies a disturbing reality where – as the saying goes – “nothing is as it seems.”

When a break-in leads to the shocking murder of his wife, Gardner must navigate the town’s sordid underbelly of deceit and violence to protect what’s left of his family from further harm.  Some unexpected twists ands turns keep the plot percolating and story moving.  At its heart, this is a cautionary tale of desperate and deeply flawed people making bad choices.  Welcome to Suburbicon.

50 minutes of bonus content include a conversation with cast members Matt Damon, Julianne Moore and Oscar Isaac as they dive into the making of “Suburbicon” and discuss everything from the screenplay to casting and more.  Plus there’s a commentary by writer/director George Clooney and writer Grant Heslov.  Paramount.  Blu-ray. 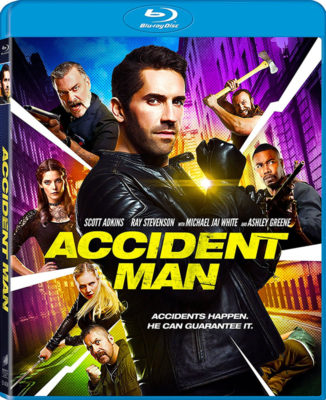 A deadly hitman becomes an accidental hero in the seriously pulse-pounding and darkly humorous action-thriller based on material from Pat Mills, the creator of the “Judge Dredd” comic and Tony Skinner.

Mike Fallon  (Scott Adkins) is the Accident Man – a stone cold killer and the very best at what he does.  But when an ex-girlfriend is dragged into the London underworld and murdered by his own crew, Fallon is forced to rip apart the life he knew and face a rogue’s gallery of ruthless assassins in order to avenge the one person who actually meant something to him.

Killer bonus features include audio commentary with star/producer Scott Adkins and co-writer Stu Small and two cool making-of featurettes.  In “Assassin’s Roll Call” we meet the crew of killers that make it their mission to make kills look like accidents and hear from director Johnson and the cast on how they made every fight look like a work of art in “Violent Ballet: Filming the Fights.”  Blu-ray.  Sony Pictures Home Entertainment.