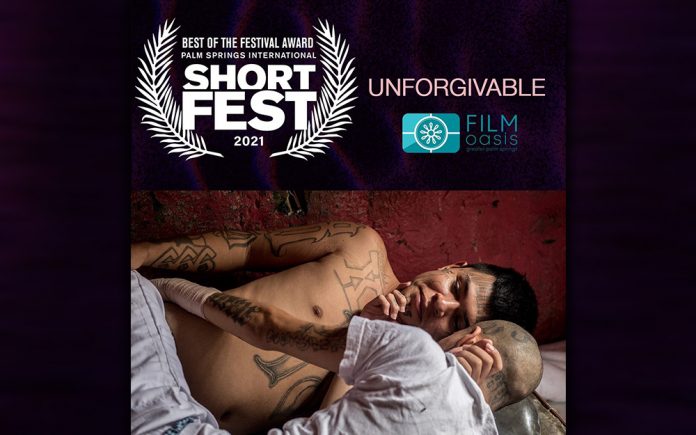 The Palm Springs International ShortFest excited audiences with week-long showings of short films from around the world. This has all culminated in the selection of winners chosen by a film jury and audience picks.

The Festival juried award winners were announced as part of Closing Night at the Palm Springs Cultural Center. Awards and cash prizes worth 25 thousand dollars, including five Academy Award qualifying awards, were presented to the winners selected from the 295 short films that were part of the Official Selection. The winner of these awards may be eligible to submit their short to the Academy of Motion Picture Arts and Sciences for Oscar consideration.

The short film Unforgivable from El Salvador was the winner for the Greater Palm Springs CVB Best of the Festival Award and received a five thousand dollar cash prize courtesy of the Greater Palm Springs Convention & Visitors Bureau. The short was directed by Marlén Viñayo and follows a ruthless hitman for the 18th Street gang as he serves his sentence inside an evangelical Salvadoran prison, where he is guilty not only of his crimes, but of an unforgivable sin under God and gang: being gay.

The winner for Best Animated Short, and recipient of a thousand dollar cash prize was Step into the River from China/France. Directed by Weijia Ma, the film follows Lu and Wei who are two young girls living in a village nestled on the banks of a river that bears many tragic stories in this surreal and stunning exploration of China’s one-child policy.

Best Documentary Short with a thousand dollar cash prize was awarded to Queen of Basketball from the USA. Directed by Ben Proudfoot, the film follows Lusia Harris, who is arguably the greatest American female basketball player of all time but struggles to get the recognition she deserves.

Best Live-Action Short Over 15 Minutes and winner of a thousand dollar cash prize was The Criminals from France/Romania/Turkey. Directed by Serhat Karaaslan, the plot is set late in the evening in a small Turkish town, when a young couple are trying to find a hotel room to spend the night together, but they face rejection from every hotel for not having the required marriage certificate. Once they believe they’ve devised the perfect scheme, the situation gets out of hand.

Best Live-Action Short 15 Minutes and Under and thousand dollar cash prize winner was The Mohel from Canada. Directed by Charles Wahl, the plot takes place after James and his converted Jewish wife Lola celebrate the birth of their first son and fly a mohel out to perform the circumcision. Family expectations and financial strain force James to confront the transactional nature of religion, and the realities of maintaining old traditions in a modern world.

The winners of Best Student Shorts all received a five hundred dollar cash prize. Student Animated Short Winner was Love is Just a Death Away from the Czech Republic. Directed by Bára Anna Stejskalová, the film shows that amid the debris of a perilous landfill, hopeful creatures yearn for an amorous connection.

The Student Documentary Short winner was The Void Inside from Germany/Iran. Directed by Julian Dieterich, the film follows Vahid, who needs to sell one of his kidneys to avoid a long prison sentence. While waiting for a buyer, a wish for a better life starts to grow within him.

The Best Student International Short Winner was Her Dance from Israel. Directed by Bar Cohen, the film follows Aya who shows up uninvited to her sister’s wedding Shabbat night and her presence threatens to reveal family secrets and lies.

The Best Student U.S. Short winner was El Clásico from Mexico. Directed by Joel Vázquez Cárdenas, the film follows the tumultuous journey of two friends on their way to a soccer stadium hands them a new perspective of their friendship, their morals and Mexico City.

The Best International Short winner received a $1,000 cash prize and was awarded to Howling from Belgium. Directed by Laura Van Haecke, the short follows nine-year-old Bo as she moves to the countryside. Slightly bored in the new environment of fields and farms, the sisters look forward to the weekend when their fathers come to pick them up. Bo’s father, however, doesn’t show up time and time again.

The Best U.S. Short winner was awarded to Inheritance, directed by Annalise Lockhart. The film follows a Black family in rural Vermont as they attempt to live a life of solitude and cope with the ghosts living on their property.

The Best LGBT+ Short winner was Eggshells from Bulgaria. Directed by Slava Doytcheva, the plot follows Nevena after her girlfriend chooses to spend Easter with family, so she dyes two red eggs and heads off to visit her own estranged father.

The Best Midnight Short winner was Night Bus from Taiwan. Directed by Joe Hsieh, the short takes place aboard a late-night commuter bus, where a stolen necklace sets off a macabre chain of events involving a jealous husband and a vengeful monkey.

The Mozaik Bridging the Borders Award winner received a $2,500 cash prize. The winner was A Broken House from the USA/Lebanon. Directed by Jimmy Goldblum, a Syrian architect and artist stuck in the U.S. on a single-entry visa eases his homesickness by sculpting life-like renditions of the home he left behind.

The Local Jury Award winner received a thousand dollar cash prize and was awarded to Dying in Your Mother’s Arms from the USA. Directed by John Beder, the short follows Dr. Nadia Tremonti, a pediatric palliative care physician, who works to ensure that terminally ill children receive quality end-of-life care.

The Vimeo Staff Pick Award, selected by Vimeo curators, received a $2,500 cash prize. The winner was The Nannies from Denmark, directed by Signe Barvild Staehr. The plot is about how Signe’s mother died unexpectedly when she was five years old. Now a filmmaker, Signe reconstructs a forgotten time in her life with memories from nannies who cared for her. The film is a character-driven story about a daughter trying to relive the past, and a father trying to avoid it.

The Young Cineastes Award winner received a thousand dollar cash prize. It was awarded to Americanized from the USA. Directed by Erica Eng, the film follows how growing up in Oakland’s hip-hop culture and playing on the high school basketball team makes it difficult for Eng to identify with her Chinese-American roots. As her sophomore year of high school comes to an end, Eng tries to find a sense of belonging within the two worlds that don’t accept her.

Audience Awards winners received a five hundred dollar cash prize. These were awarded to the film which scored the highest on ballots submitted by the audience in its respected category.

Best Live-Action Short went to The Departure from France, directed by Saïd Hamich Benlarbi. The film takes place in the summer of 2004 in Morocco, and 11-year-old Adil is upset by the visit of his father and big brother, who will leave for France in just a few days.

Best Animated Short went to Love is Just a Death Away from the Czech Republic, directed by Bára Anna Stejskalová. Best Documentary Short was A Broken House from the USA/Lebanon, directed by Jimmy Goldblum. Best Student Short was awarded to Her Dance from Israel, directed by Bar Cohen.