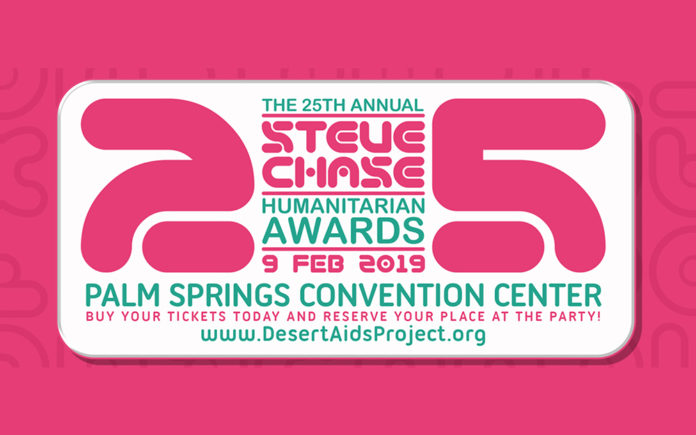 Attendees of The 25th Annual Steve Chase Humanitarian Awards will be treated to a special performance by pop music icon Barry Manilow.  Barry Manilow’s unparalleled career encompasses virtually every area of music, including performing, composing, arranging and producing. A Songwriters Hall of Fame inductee, Manilow has triumphed in every medium of entertainment. Having sold more than 85 million albums worldwide, Manilow is one of the world’s all-time bestselling recording artists. The GRAMMY®, TONY®, and EMMY® Award-winning musician has had an astonishing 50 Top 40 singles including 12 #1s and 27 Top 10 hits.  In 2017 Barry Manilow received the BMI Icon Award and is ranked as the #1 Adult Contemporary Artist of all time, according to Billboard and R&R magazines.

The Steve Chase Humanitarian Awards gala has raised millions of dollars to care for people living with HIV.  First organized by and named for famed interior designer Steve Chase – a former D.A.P. donor, volunteer, and board member – the gala is a highlight of the desert social season and kicks off the night prior with an exclusive VIP pre-party at the Palm Springs Art Museum honoring major donors and celebrity guests.  Preceding the VIP Party, The City of Palm Springs will honor Chase as a humanitarian and designer with a Palm Springs Walk of Stars Dedication in front of the museum.  Chase’s philanthropy has had a lasting impact on the environment, arts & culture and healthcare through his support of the Living Desert, Palm Springs Art Museum, and Desert AIDS Project.  Leaders of the three non-profits will speak about the lasting impact of his support during the dedication ceremony.

This year’s awards will posthumously honor Steve Chase with Steve Chase Humanitarian Award honoring the impact 25 years of fundraising has made at Desert AIDS Project.  The evening will also honor Geoff Kors and James Williamson’s marriage to community service when they are presented with the Partners for Life Award on February 9 at the Palm Springs Convention Center.  Kors and Williamson have a long history of community leadership, focusing their time and resources on social and political issues as varied as LGBTQA+ rights, education, and healthcare.  Long-time supporters of Desert AIDS Project, both are members of Partners For Life.  Locally, Williamson served on the Palm Springs School Board and Kors is a member of the Palm Springs City Council. D.A.P. Chief Development Officer, Darrell Tucci explained why this award is so important. “Few individuals have made a lasting impact in our community with the purpose and clarity of Geoff and James.”

To reserve your place at the party for the 25th Annual Steve Chase Humanitarian Awards, go to www.stevechase25.eventbrite.com or call 760-992-0445.

Co-chairs Kevin Bass, Patrick Jordan and Lauri Kibby have been planning this year’s gala for more than a year with an eye to reinventing the format of the evening.  The party begins with red carpet arrivals LIVE on NBC Palm Springs at the Palm Springs Convention Center at 5:30pm.  The Steve Chase Fashion Experience will feature Palm Springs Fashion Editor, Susan Stein, Ethylina Canne and other special guest commentators.  The awards kick off at 7:00 PM and will feature a performance by Barry Manilow followed by the after-party.

Desert AIDS Project remains committed to a bold but achievable target: 90-90-90: Treatment for All

People can carry the HIV virus for years and not know it.  The only way to know if you have HIV is to get tested.  Your support enables D.A.P.’s Get Tested Coachella Valley program to provide free and confidential HIV testing at hundreds of community events and dozens of test sites – from health fairs and food banks, to Walgreens and D.A.P.’s sexual health clinic, The DOCK.

By 2020, 90% of all people with diagnosed HIV infection will receive sustained antiretroviral therapy.

Thanks to attendance at the Steve Chase and other fundraising events, Desert AIDS Project ensures that newly-diagnosed HIV positive patients receive the medications they need to survive and thrive, and regular follow-ups to safeguard their well-being.  D.A.P.’s Patient Assistance Program secures critical HIV and other medications at reduced cost.

By 2020, 90% of all people receiving antiretroviral therapy will have viral suppression.

To suppress the virus to an undetectable level, an individual must start on medication as early as possible and stay on it for a lifetime. This can be challenging when facing other serious challenges.  That’s the driving force behind D.A.P. Total Care – the comprehensive combination of health and wellness services which are uniquely tailored to each individual – including medical, dental, mental health, social services, support groups, substance abuse counseling, and much more – all conveniently provided under one roof at D.A.P.’s Palm Springs location.

Steve Chase founded Steve Chase Associates, his Rancho Mirage interior design firm, in 1980, following a lengthy and noted affiliation with Arthur Elrod Associates of Palm Springs. An acclaimed designer, Chase was active for many years in community organizations, including the Desert AIDS Project, the Palm Springs Desert Museum, The Living Desert Reserve, and The McCallum Theatre. During his firm’s formative stages, Chase offered design, consulting, and purchasing services to the McCallum Theatre, confirming his longtime passion for the performing arts. In addition, numerous projects were undertaken at The Living Desert Reserve where Chase was a Board Member. Chase worked closely with Reserve administration, offering both design and financial support for additions including Eagle Canyon and the Meerkat Café. Chase contributed $2.5 million to The Living Desert Reserve for construction of an administrative center and a collection of California landscape art. In addition, he gave $1.5 million and 132 works of art to the Palm Springs Desert Museum, which opened the Steve Chase Art Wing and Education Center in 1996.

Chase’s introduction to the Desert AIDS Project followed his Board work with The Design Alliance to Combat AIDS (D.A.C.A.) in Los Angeles. The impact and need for local community services was apparent early, and Chase was committed to serving the desert community following his departure from the D.A.C.A. Board. He was an annual participant in the Desert AIDS Walk and he was instrumental in bringing “Heartstrings” to the Coachella Valley in 1992. This production was followed by “A Valentine’s Gala” in 1993, when Betty Ford, Joan Krok, and Chase were honored for their longtime compassion and personal dedication to the Desert AIDS Project and its clients. Chase introduced his friends, business associates, and clients to the Desert AIDS Project and encouraged their financial and personal involvement. This introduction led to the dedication and donation of the private residence of Joan Krok to the Project, a significant donation which allowed the Project to expand and broaden its mission.

Chase’s professional honors included Interior Design Magazine Hall of Fame Award, and Designer of the Year, presented to him by Designers West Magazine.