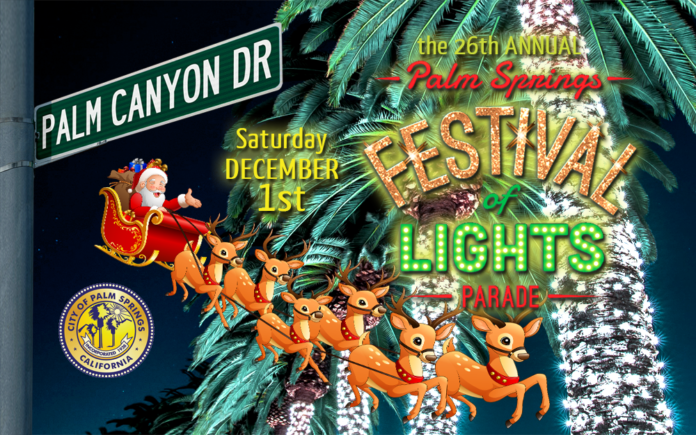 The New York Times best-selling author, singer, actress and Palm Springs resident Lorna Luft will lead the festivities along Palm Canyon Drive as this year’s Celebrity Grand Marshal for the 26th Annual Palm Springs Festival of Lights Parade, the City’s signature holiday event, which every year brings more than 100,000 residents and visitors to downtown on the first Saturday in December to celebrate the beginning of the holiday season in the Coachella Valley.

The daughter of legendary entertainer Judy Garland, Luft may be best known for her performances in the hit film Grease 2 and the television drama Extremities with Farrah Fawcett. She has also performed on Broadway and is the author of two best-selling books: Me and My Shadows: A Family Memoir and her latest with co-author Jeffrey Vance, A Star is Born: Judy Garland and the Film that Got Away. 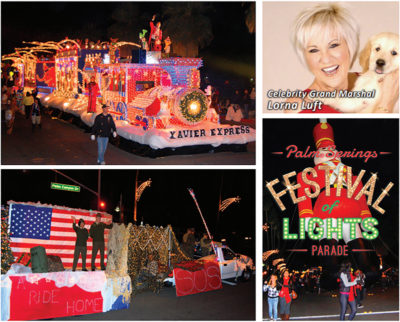 Joining Luft in this year’s parade is famed Palm Springs modernist architect Hugh Kaptur along with Gino Lamont, news anchor for NBC Palm Springs, who will serve as Community Grand Marshals. Garfield the Cat will also make an appearance, serving as the parade’s Children’s Grand Marshal.

The holiday lights spectacular kicks off on Saturday, Dec. 1 at 5:45 p.m. on Palm Canyon Drive at Ramon Road — and heads north concluding at Tamarisk. Once again, the parade will be broadcast live on NBC Palm Springs. Coverage begins at 6 p.m. Featuring twinkling floats, magnificent marching bands, huge Macy’s-style holiday balloons and Santa Claus, the parade is a much loved holiday tradition that is not to be missed!

“The Palm Springs Festival of Lights Parade has become one of Southern California’s most beloved holiday events and an important part of the magic that makes our destination, like no place else,” according to Mary Jo Ginther, Director of the Palm Springs Bureau of Tourism. “Bring the whole family and join us in downtown for what is sure to be a night to remember!” http://www.psfestivaloflights.com/