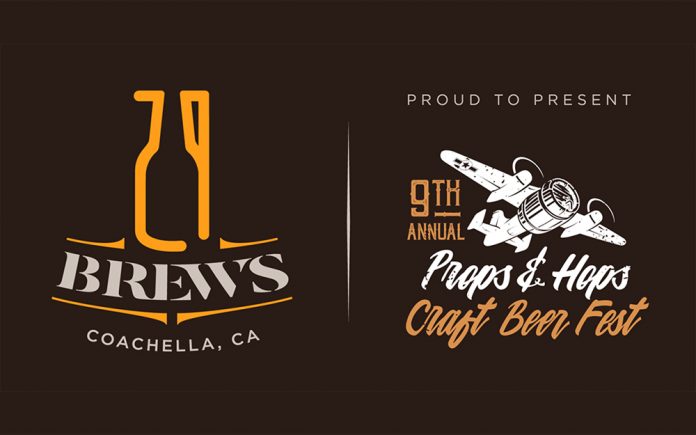 29 Brews, the in-house brewery at Spotlight 29 Casino in Coachella, California, will be the Presenting Sponsor at the Palm Springs Air Museum’s 9th Annual Props and Hops Craft Beer Festival. The popular annual event will take place Saturday, November 20 and will feature the opportunity for attendees to sample craft beers from 29 Brews and other breweries as well as tour the impressive air museum and ride vintage airplanes as they soar above the Coachella Valley. As Presenting Sponsor, 29 Brews will allow festival attendees to enjoy some of their signature craft beers, and play games. The Props and Hops Craft Beer Festival will run from 1-8 PM and tickets are $40 for general admission. A $75 special VIP admission provides early entry at 12 noon. For more information, go to events.palmspringsairmuseum.org.

“We are delighted to be the Presenting Sponsor at this beloved event,” said 29 Brews Brewmaster Ed Heethuis. “Although new, 29 Brews has already received tremendous critical and popular acclaim for our range of hand-crafted craft beers. We look forward to sharing our sought-after Chairman’s Blonde, Rez Rage Red, Tipsy Tortoise IPA, and Peabody’s Russian Imperial Stout with the event’s beer aficionados.”

Located in the new Taproom 29 eatery in Spotlight 29 Casino, 29 Brews is a sophisticated in-house brewery that serves up a selection of 29 craft and flavored beers, poured at a continuous 29 degrees and served on stunning wraparound ice-rail at the bar. In addition to the 29 Brews house beers, the brew master rotates 15 of his 29 total tap handles on a regular basis, offering both beer enthusiasts and casual beer fans with an array of world-class options which are always changing. Taproom 29 has the luxury of pouring an eclectic portfolio of constantly changing suds, often changing as many as six different beers in any given week.

The brewery’s top-selling craft beer is Chairman’s Blonde, named after Tribal Chairman Darrell Mike. This gorgeous Blonde is crisp, clean, and perfectly balanced. Brewmaster Ed refers to is as a “simple, straightforward SMASH beer.” Another favorite is Rez Rage Red, an India Pale Ale that has notes of caramel, toffee and even a hint of rye, providing complex rich, deep malty layers. 29 Brew’s Tipsy Tortoise IPA is a wonderful example of a piney and citrusy unfiltered IPA. Grapefruit and pinecone forward, this beer hits your nose and palate with a powerful cascade of citrus. Peabody’s Russian Imperial Stout is described as “darker than the Joshua Tree night sky,” featuring a decadent, rich, complex, and intense flavor profile of chocolaty goodness.

About Props and Hops

The Props and Hops Craft Beer Festival is designed for people who love airplanes and craft beer. It will feature more than 25 craft breweries, food trucks (from In-N-Out, Fries Galore, and The Cone Zone), live music by Horace Miller Band and DJ Alex Harrington, and the opportunity experience vintage airplane rides. The breweries’ booths will be set up inside the Air Museum’s Miles hangar, with vintage airplanes are only a few feet away. The hangar doors [which are about 100 feet wide] will remain open, so everyone can mingle inside and out, sampling beers and watching the ramp, where aircraft will be taking off and landing throughout the afternoon. Attendees must be 21 or older.

Experience of a Lifetime

Soar high above Props and Hops by booking a ride in one of the museum’s flying warbirds. Hear the engine roar and be transported back in time while enjoying magnificent views of the Coachella Valley. Each ride is an experience of a lifetime. Choose from the C-47 Skytrain, the T-28 Trojan, the PT-17 Stearman, and the P-51 Mustang.

The Palm Springs Air Museum is currently following all CDC/State COVID-related guidelines and procedures regarding events. The museum is monitoring the situation daily, and recommendations and updated guidelines from the CDC/State will be put in place as or when they are announced.

For more information on the event, go to events.palmspringsairmuseum.org.