Over the holiday weekend through Tuesday, Sunnylands Center and Gardens, AKA, “The Camp David of California,” hosted President Obama and numerous world leaders at a summit for the Association of Southeast Asian Nations. Hundreds of protesters, mostly of Thai and Cambodian descent, traveled from all over the US to Rancho Mirage with the purpose of calling attention to various issues including but not limited to human-rights abuses in their homelands, the US government’s relationship and trade-practices with Southeast Asian nations and the stances the US government has taken regarding issues affecting citizens of Southeast Asia. In addition, there were also a few pockets of protesters who showed up with other agendas such as immigration reform. It really was a mixed bag and I wouldn’t blame anyone for finding the situation confusing. To be honest, I spent several hours with the demonstrators and left more confused than I was when I arrived.

Thank the Google gods, I was eventually able to make some sense out of a lot what was being talked about and I admittedly felt somewhat guilty for having such little understanding for so much of what is happening in other parts of the world. As a nation, the US is about as narcissistic as it gets and we often pay no attention to circumstances in other countries unless we feel as though they somehow affect us on a personal level. I was surprised to find groups of people who emigrated from the same countries who were there representing opposite opinions on the same issue and at times, debates among them became heated.

The majority of demonstrators I was able to interact with were from Cambodian and Thai descent. Many spoke of how they loved their homelands but were proud to be Americans. The Thai demonstrators were clearly the most divided, and I soon learned to identify their groups by what they were wearing. In a nutshell, the “red shirts” are against the longstanding monarchy in Thailand and want to abolish it along with a hundred-plus year-old law, “Article 112” which basically prohibits any speech that is critical towards or deemed offensive to the King. Punishments for not following 112 can be severe, including decades in prison or worse.

The “yellow shirts” (many of whom also wore camouflage) for the most part are conservative, traditionalists who support the King, believe he has the best intentions for Thai people, and that anyone who criticizes him and the monarchy are disloyal, divisive and deserving of the consequences set by article 112.

There was talk of gross violations of human rights, corruption, greed, patriotism, rebellion and everything in between. The messages the demonstrators were attempting to publicize were passionate, yet varied from group to group. In order to avoid diminishing, devaluing or misinterpreting their intended agendas, I decided to let the people represent themselves and promised them I would quote them directly while doing my best to include opposing opinions equally. (Trust me, many of them wanted my word on that.) Dozens of them were happy to talk to me and be photographed but declined to give their names. Some joked that it wasn’t worth doing so because, like most Americans, I would probably find their names too difficult to pronounce anyway. 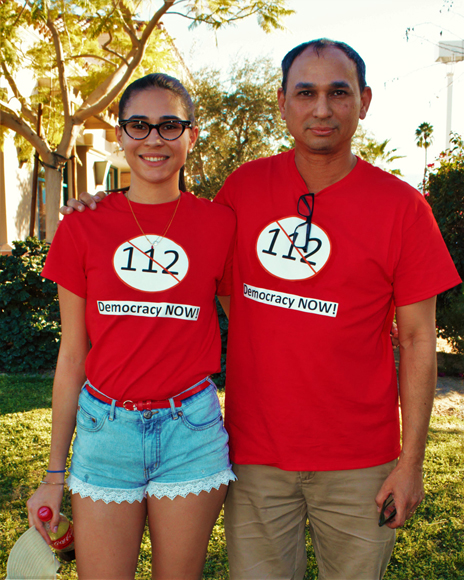 (16 year-old Kayleigh McCormick and her father, Bob, who is of Thai descent, traveled from Washington DC to join the protest.)

Kayleigh:  “In 2014 there was a military coup which successfully overthrew the democratically elected Prime Minister of Thailand who was exiled and replaced with someone who is basically a military dictator. The King is nothing but a pawn of the government. He is close to 90 years-old, in poor health and hasn’t been seen in months. Technically, the Prime Minister, judges, military leaders, etc., are all supposed to report to the monarchy which is why there are no checks and balances. They are able to control everything in ways that are of no benefit to the people. They make decisions that benefit the 1% and the government officials and are getting rich while doing nothing for the citizens of Thailand.”

My issue with the stance taken by those in the yellow shirts is that they are here in the US now enjoying the freedom democracy brings, yet they want to deny those same rights to those still in Thailand.

Bob: “We simply want Thailand to be for Thai people. Currently, it has been taken over by those who are hiding behind the King. The King is really a symbolic image that is well respected in Thailand but they are abusing his power. The wealth of the monarchy is enormous and it is hoarded to the point that there is very little left for the citizens. The former prime minister who was democratically elected and won by a landslide was maKing major changes in the system which is why the coup happened. The new constitution calls for senators to be appointed rather than elected. Those appointed leaders make the decisions that affect everyone.” 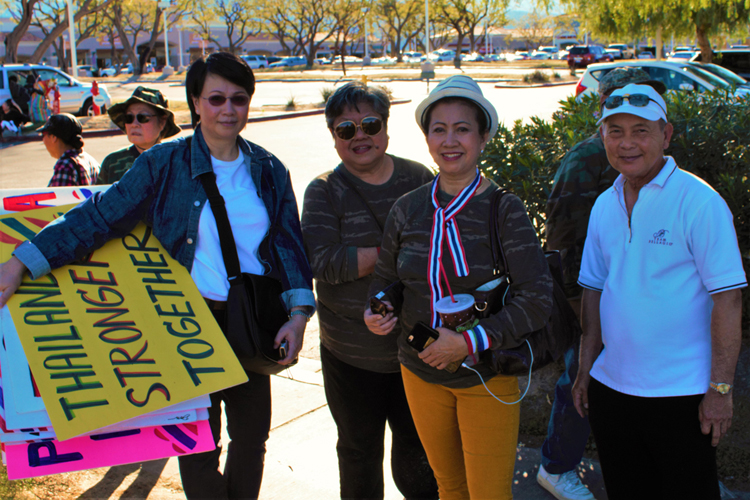 (“Yellow shirt” Thai immigrants who came from Buena Park, Ca. to show support for the Thai Monarchy (edited for space and clarity, watch full interview in video link below)

Female Protester #1:  “You have the law to protect Obama’s rights. They want to say bad things about our King.”

Esther Sanchez: Do you want the people of Thailand to be able to say whatever they want about whomever they want?

Male Protester:  “We have our own legislature that is exceptional.”

Female Protester #1 interrupts in attempt to help clarify due to language barrier: “In our culture we respect authority, highly. Even our father and mother….nobody can say anything about them.”

Female Protester # 2. (not pictured above/seen in video):  “Our King is still under the law in Thailand. He doesn’t have any power at all. He still has to follow the law. We respect him because he has done so much good for us in the past. The government makes the law. Here they have free speech, but in Thailand they must have respect…everybody knows that our King always does good for us and they don’t want to mention so much about him because he is the top. …..The people (red shirts) who are on his side (exiled prime-minister), they got paid (to attend the protest). We came all this way because of our hearts. Nobody paid us.”