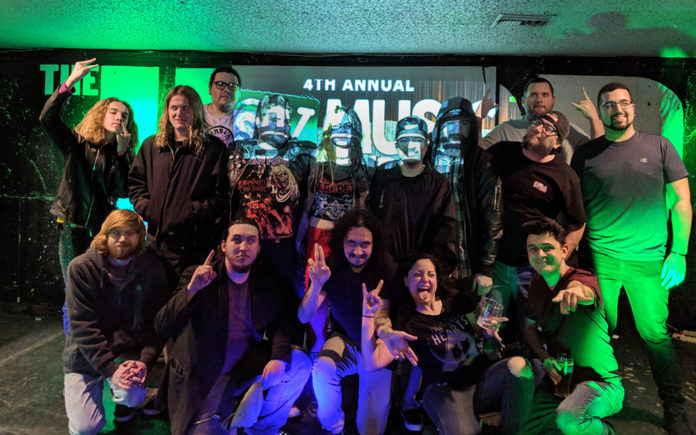 Last Sunday night, music fans gathered at The Hood Bar and Pizza for yet another nail-biting round of competition where some of the desert’s most exciting and dynamic rock and metal bands went head to head, battling it out for one of 5 coveted spots in the Finals, which will be held at The Hood on Saturday, May 4. The winners of the finals will receive a prize package including $2,000.00 cash, 4 hours of recording time in the studio with David Williams of Melrose Music Recording Studios, a professional photo shoot and more prizes to be announced. Nobody envied the difficult task at hand for the event’s panel of judges who included: David Williams of Melrose Music, TK from 93.7 KCLB radio and Bobby Taffolla, guitarist from the metal band Perishment.

The first band to take the stage has become a respected staple on the local scene. No stranger to this competition, The CMF’s, really are a band’s band that are admired by pretty much every musician in town. No matter how many times I see them perform, I am always impressed by these extremely young musicians who, with their bluesy riffs and seamless transitions, put out an element of soul that sounds as though they have been at it for decades. A typical CMF set will probably bring to mind familiar, classic and southern rock bands that we all know and love… yet their sound is unique and completely their own. https://www.facebook.com/TheCMFs/

With a new album released in 2018 and a new video coming out this week, this kick-ass trio has been on a roll and their popularity is growing by the minute. If you take the time to listen to pretty much any of their songs, I guarantee you will catch the bug. Their sound, although clearly their own, is sprinkled with funky, bluesy breakdowns, unexpected twists and a mixture of just about every other element that, in my humble opinion, makes them truly, “Desert Rock.” They started out strong with their extremely catchy single, “San Andreas,” and I would be lying if I told you I haven’t been singing it to myself for the past 2 days. If you aren’t yet familiar with Mega Sun, that song a great place to start. https://www.facebook.com/megasuntheband/

If there’s anything that can be said about this melodic, metal 5-piece is that they bring to the table a youthful energy that, if anything, acts as a magnifier for their very big sound. Much of what they put out has a classic, heavy-metal vibe with a modern twist which is clearly a result of their wonderful, youthful, angst and f-you attitude. Their songs are artfully orchestrated while their lyrics are clever and thoughtful. With all that going on and more, When Tides Turn will likely see longevity on the local scene and beyond and I for one can’t wait to see where their music takes them.   https://www.facebook.com/pg/WhenTidesTurn/about/?ref=page_internal

With just 2 points separating them from the runners-up, (Mega Sun), ORMUS brought their A-game and it paid off. With a combination of elements including an extremely versatile and contrasting sound, top-notch musicianship and energy that went through the roof…the cooky, psychedelic, desert, outer-space experience that is an ORMUS show is pretty much a, “you have to see for yourself” kind of situation. Not only were the judges impressed by their solid skills and unexpected transitions, the fact that they have dueling vocalists with extremely contrasting vibes takes you on a trip that you don’t want to end. They pretty much ripped out their own hearts and threw them down on the stage for all to behold and that is precisely why they won. https://www.facebook.com/ormusband/