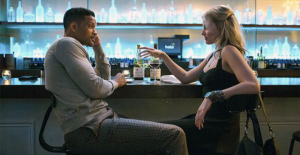 It’s been nearly ten years since Will Smith has played his charismatic, charming persona on the big screen. You know, the guy we first met on his hit TV show ”Fresh Prince of Bel Air.”

Smith has taken on a series of serious sci-fi action guys in the last decade that ended with the dreary AFTER EARTH, an ill-conceived vehicle to apparently promote Jaden, his rapper teen son as a movie star. The movie was also criticized as laden with Scientology notions. It did not help that there were rumors of Smith’s embrace of the controversial “religion.”

It’s great to see Smith back on the big screen being his old self. We love that confident, good-looking guy. And this film amply displays Smith’s considerable charm in the character of Nicky Spurgeon, a master hustler with a crew of skilled underlings who takes on Jess Barrett (Margot Robbie), a stunning looking but naive apprentice. Or is she naive?

The first half of the film is a lesson in the art of filchery. Highly choreographed sequence of stranger’s pockets being picked is a delight to watch. But are things what they seem? (Are they ever?)

Soon, the glamorous, dapper con artists are in trouble. Of special concern are a billionaire gambler (a terrific B.D. Wong) and an Argentine racecar entrepreneur (Rodrigo Santoro).

I liked the numerous twists, the great looking stars and the hyper glam setting. I thought it was interesting to see two people who are masters of deception with everyone else apparently trying to be honest with each other – or are they? That’s a fascinating paradox for a character trait is it not?

Glenn Ficarra and John Requa, the co-writers and directors behind CRAZY STUPID LOVE and the little seen but hilarious PHILIP MORRIS I LOVE YOU, starring an unhinged Jim Carrey in one of best performances.

Sometimes it’s enough to be diverted with a frothy, lightweight entertainment, with two beautiful actors who have real on-screen chemistry. All stories are contrived, but this fun film radiates a sexy, glamorous aura that is downright seductive. 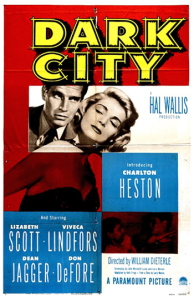 Trusted home video distributor Olive Films has resuscitated and restored – for the first time — some nearly forgotten but cool vintage noir films (among other hard to find domestic and foreign titles) in nice looking Blu-ray transfers. Check out these cool movies and their wonderful old-school posters.

Originally titled NO ESCAPE, this 1950 revenge thriller’s title was changed just before release. I like the original title, it better conveys the tone of this engaging story about some gamblers who hustle a sucker out of $5K in a fixed poker game and then experience a dark vengeance closing in on them after the man kills himself. Charlton Heston is just fine as the dead man’s vengeful brother who picks off the bad guys one-by-one. This film was Heston’s first professional film appearance. He was 27. You can see Heston’s trademark vocalizations as well as his deliberate physicality are already in place. It served him well for the next 50 years. 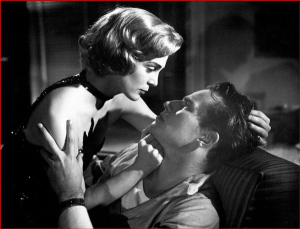 Directed by William Dieterle and produced by Hal B. Wallis, the film costars Lizabeth Scott, Dean Jagger, Jack Webb and Harry Morgan. You may recognize Webb and Morgan as co-stars of TV’s iconic Dragnet series. 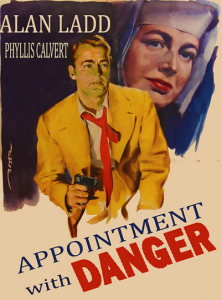 Al Goddard (Alan Ladd) is a U.S. Postal Service detective who’s assigned to investigate the murder of a fellow Postal Service officer. When Goddard arrives in Indiana, he finds key witness, Sister Augustine (Phyllis Calvert), is a beautiful nun. Goddard infiltrates the gang of murderers, who are planning a million dollar mail job. But when the gang exposes him, he has to find a way to save himself and Sister Augustine. Lewis Allen directs from a pretty good screenplay by Richard Breen and Warren Duff. Olive Films. Blu-ray. 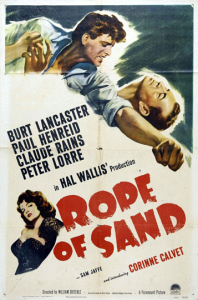 Set in West Africa, Burt Lancaster is Mike Davis, a hunting guide who stumbles across a trove of diamonds but refuses to reveal its whereabouts, even when tortured by a diamond company’s security guard. When Davis plans to retrieve the diamonds he’s stashed, a beautiful seductress hired by the diamond company to get the diamonds sidetracks him. I was fully engaged when Lancaster’s character made plans to sneak back into the mining are and escape to Angola! Besides Lancaster, the great cast includes Paul Henreid, Claude Rains and Peter Lorre. Produced by Hal Wallis and directed by William Dieterle, this 1948 “blood diamond” tale still works for me. Olive Films. Blu-ray.