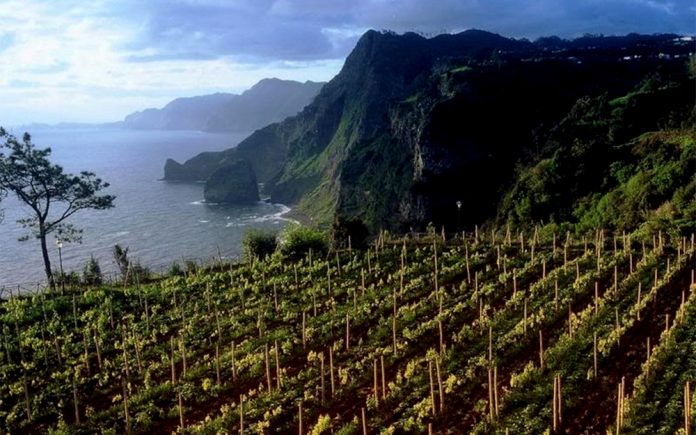 It’s that time of year where we begin to recommend wines for the holidays:  More reds than whites (hey! How about that Orange wine?); of course our fair share of bubbly and some tasty dessert wine for the plethora of sweeties out there.

As you may know, I don’t have much of a sweet tooth; I’ll always go for savory over cake & cookies (Donuts notwithstanding!).  Although I love the French Sauternes, the Vintage Ports, the German Trockenbeerenauslese, and the Hungarian Tokaij, my favorite sweetheart will always belonged to Madeira.

Madeira is both simple to write about, or it can be a rather involved story.  Let’s go with the simple: American-wise, this extraordinary wine has been a part of some of the greatest historical events from Thomas Jefferson’s toast at the signing of the “Declaration of Independence” in 1776 to the presidential oath-taking ceremony of George Washington.

Internationally speaking, this wine gets its name from the island of Madeira, a small, beautiful rock island about four hundred miles from Portugal—off in the Atlantic Ocean. Madeira’s unique taste comes from repeatedly heating the wine. It also carries a touch of smoke for some good complexity—and, I’ll get to that story in a bit.

While Madeira wine has varying sweetness levels from dry/sweet to sweet/sweet) and there’s always some high acidity, keeping the dessert wine refreshing.  Even the sweet/sweet Malmsey grape carries acidity.

Madeira is a fortified wine made generally made from 5 different grapes grown on the island; most of the time you find a blend of the grapes.  I recommend single varietal Madeira.  Sercial and Verdelho are lighter bodied with more citrus and acidity—but in a sweet background.

You’ll wish to look for a Malmsey or a Bual for some great sweet notes of roasted nuts, stewed fruit, maple syrup, caramel, and toffee.  The wine savvy holiday gift is to present this wine with a nice box of chocolates.

As with a hamburger—one really needs to personally enjoy Madeira and not just read about it.  It’s not Marsala, nor Port, nor Sherry.  It’s its own thing; especially when it comes to that “smoke” note in the wine itself.  So here goes the “smoke” story:

Once upon a time, a tyrannical Portuguese explorer lost his love to a lucky swarthy lothario. The rebellious young couple found their way to the Madeira Island—so far away from the madding crowd, and, that angry admiral.  They decided to play the blissful Adam & Eve and frolicked naked in the lush garden island.

The jilted navigator was after all a capable seaman, and, unfortunately for the couple, the annoyed explorer finally found the duo and his anger boiled as he watched them dancing around.

The couple quickly ran into the forests for safety; however, the scorned sailor had his men set fire to the entire island.  The island forest was so dense that it burned for seven years straight. During that time, people on the mainland of both Portugal and around North Africa, could see giant plumes of black smoke way out in the ocean.  They assumed that was the edge of the world—ah! That’s why that’s why!

Is that a fun bedtime story to enjoy with your wine and chocolates, or what!

Anyway—that soot seeped well into the ground and now all those grapes grown on the island carry that loving “smoke” note that makes its way into the wine.

So that combination of grapes, brandy, smoke, and the island’s unique terroir—along with cooking the wine while it’s being produced, gives Madeira the quality of aging for as long as one can keep it properly stored.

One can go online and find perfect bottles of Madeira dating back to the late 1700s.  During a recent restoration project at Liberty Hall Museum on what is now New Jersey’s Kean University, the staff discovered nearly three cases of Madeira wine from 1796, as well as around 42 demijohns from the 1820s.  The quality of the wine was magnificent.

Back in the 80s when I was purchasing vintage wines for my client, I had the hair-brained idea to purchase as much 1850 D’Oliveira Madeira Verdelho Reserva there was available, thinking it would take-off—investment wise, like Vintage Port.  It didn’t—but we at least got to enjoy the mistake…cheers! to that!

Cooking with Madeira is of course very popular.  But please use the newer stuff that doesn’t cost much.  One weekend when I was away on business, my wife made her dad Steak Madeira. Unfortunately, I accidently left an open bottle of 1870 Madeira on the kitchen counter.  You guessed it—geez!

I still have one bottle left of the 1850 D’Oliveira Madeira Verdelho, which is resting over at the Wine Vault of the Desert in Palm Desert. I’m always asked how much is that Madeira worth.  The answer is, “whatever the market will bear.”  How much you got?

The sexy dessert pour for the holidays is Madeira; serve dry Madeira at around 58 degrees and sweet Madeira just slightly cooler than room temperature. It’s great as an apéritifs or a digestif.  For meal pairings: dry Madeira is best served with sushi, smoked salmon, creamy soft cheese, or fruity desserts.