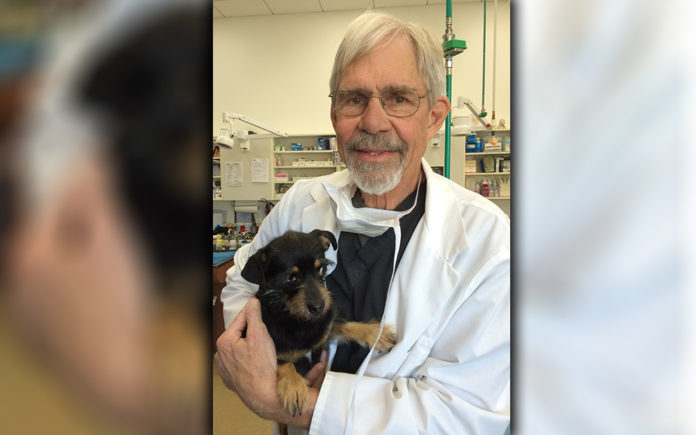 The tiny Terrier was wedged against the back of the kennel wall at our local county shelter, frozen with fear and shaking.  Meredith Greenwood spotted the dog during her volunteer shift at the Coachella Valley Animal Campus.  She took a closer look at the little pup, scanning the information on her kennel card, learning that she came in as a 3-yr-old stray.  Meredith noticed there was something wrong with her right eye.

While the other shelter dogs wagged their tails greeting prospective adopters, this dog was unresponsive.  The days passed and no one adopted Megan, and Meredith worried that adopters would be put off by her bad eye.  She decided to take the dog outside for some exercise.  Meredith recalls, “Megan was so frightened that it was difficult to get her out of the kennel.  Once we were outside, I could feel her finally relax, and she nuzzled against my chest wanting to stay with me.  We sat there for over an hour.  When I returned her to her kennel, she began shaking again.  I hated to leave her there, scared, confused and lonely.  When I went home that night, I could not get this dog out of my mind.”

Meredith volunteers for Loving All Animals, a local animal welfare organization.  She reached out and asked them to rescue Megan, adding that she would gladly foster her.  Loving All Animals agreed to take her.  It took about a week in Meredith’s loving home for the tiny dog to relax and know that life could be okay.  Meredith recalls, “She really didn’t know how to be a dog at first.”

A trip to the vet confirmed that Megan was blind in her right eye, and there was no treatment for this.  However, it turned out that the eye issue was secondary to a major medical problem no one had anticipated.

Meredith noticed something seriously wrong with Megan’s gait when she ran in the backyard, using only three of her legs, and holding up one of her rear legs.  An x-ray revealed a fractured femur bone hitting her pelvis and causing that to fracture as well.  We suspect the tiny pup was in considerable pain, but of course dogs cannot let us know.  Some sort of blunt force trauma caused this injury, and sadly this confirmed fears that Megan may have been abused.

Desert Dunes Animal Hospital generously provided us with a “rescue discount” for the surgery Megan needed, a Femoral Head Arthroplasty, also known as a FHO procedure.  Megan is pictured here with her wonderful surgeon, Dr. John Howarth.  The bill for this surgery was still quite costly, but the results very successful.

Today Megan is free from pain and happily romping with other dogs.  Megan’s miracle was not just her physical healing.  The emergence of her loving spirit was another miracle.  Meredith recalls the first time she came home and was welcomed by Megan wagging her tail, the dog’s entire body moving in a joyful greeting.  Megan always had love to give.  Now through receiving it for the first time from humans, she became the dog she was meant to be.

Megan found a wonderful forever home with dog lovers Charlotte and Jim O’Callaghan.  They were not looking for the perfect dog, and thought one-eyed Megan would be a good fit for them.  When they called Loving All Animals and were told the dog also had an issue with a leg, they were not the least hesitant to meet her.  Charlotte reports, “She is a little treasure!  She melted our hearts, and it seems like Megan’s been with us forever.  Every Sunday I make a homemade breakfast for her and the other pups.  Megan sleeps with us every night.”

Your donations enable Loving All Animals to provide a safety net and medical care to give homeless animals like Megan a second chance.  The dogs they rescue often have received no previous veterinary care.  The animals also need to be spayed or neutered, vaccinated, and microchipped.  You can donate online at www.lovingallanimals.org.  Checks can be mailed to Loving All Animals at 73550 Alessandro, Palm Desert, CA 92260, or contact (760) 834-7000.  Please designate the reason for your donation as “Megan” or “dog vet fund”.