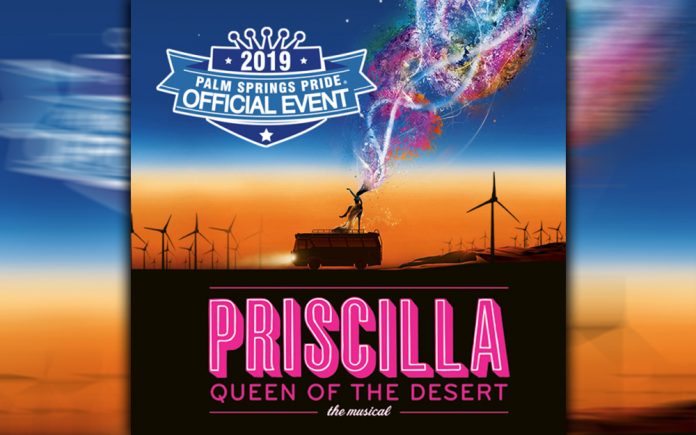 Palm Canyon Theatre offered up a spectacular Official Event for Palm Springs Pride weekend with the opening of their production, “Priscilla Queen of the Desert.”  Book by Stephan Elliott and Allan Scott with Musical Arrangements and Orchestrations by Stephen ‘Spud’ Murphy.  Priscilla makes her trek across the desert in grand style thanks to the outstanding cast and crew of this camp classic. 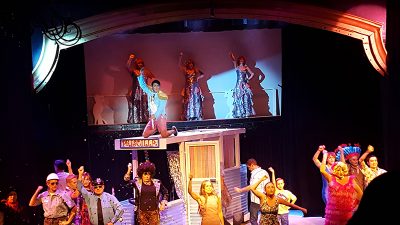 The musical version of Priscilla, is adapted from then 1994 film, “The Adventure of Pricilla Queen of the Desert,” by Steven Elliot. It tells the story of three friends, two drag queens and a transgendered woman, who take a road trip across the Australian desert from the big city of Sydney to the remote desert resort town of Alice Springs. Along the way they encounter small town homophobia, violence and a little bit of romance.  It’s a fairly predictable script aimed at fans of camp, but what really makes this show spectacular is the endless talent, both on stage and off, that brought this show to life.

Miss Understanding, (Kam Sisco,) rendition of ‘What’s love got to do with it,’ beautifully sets the tone for this campy, but heartfelt comedy.  Ron Coronado’s Bernadette, is an understated beauty queen of times gone by, but she still evokes the awe and wonder of her lost youth.  Coronado presents her as a genuine star who has lost some of her illumination, but is on the verge of finally finding her prince charming when she meets admirer, Bob, (Luke Rainey,) a mechanic who admires her for the lady she is.  Jay Espano, as Felicia/Adam, will steal your heart with his exceptional voice and star quality performance, then he will throw in moments of making you want to slap him for good measure.  Ben Reece, portrays Tick, the instigator of this road trip.  He’s hiding a secret from his friends that he knows won’t make him look good, but he’s finally ready to face what he’s been running from for years. 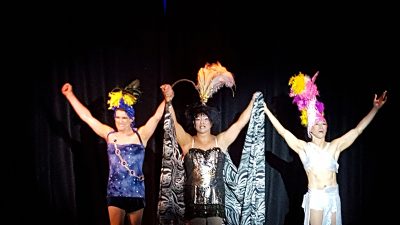 Alegra Angelo, Desiree Clark and April Mejia as the 3 Divas are stunning.  They kick off many scenes with their harmonic song and dance.  I was truly captivated each time they entered the stage.  Every member of the ensemble will have you mesmerized with their combined talents.  This is truly a gifted group of actors.  David Brooks, as the Preacher, the bad guy and the ensemble, seamlessly transformed between characters.

This show is full of 1970’s and 80’s hits.  From Donna Summer’s “Hot Stuff,” to John Denver’s “Thank God I’m a Country Boy,” you will find your feet tapping along as these classics take on new life.  The Live Orchestra, led by Musical Director Steven Smith, (Piano) David Bronson, (Drums) Larry Holloway, (Bass) and John Pagles, (Guitar) really puts the frosting on this rainbow cake.

Richard Marlow certainly had his hands full with directing this large cast, multi-scene musical, but he seems to handle the task with aplomb.  Bringing the whole show together with great finesse.  Dereck Shopinski’s costumes take on a life of their own in this show, they are as extravagant and captivating as would be expected to grace the queens of the desert.  SE Layne’s choreography is raw and elegant, perfectly depicting the necessary dance for each song and scene.  Toby Griffin’s scenic design was understated perfection.  J.W. Layne’s lighting design and Mado Nunez’s hair/makeup round out the talent that made this production top quality.

I had no preconceived notions about this show, having never seen the film or any previous productions, so I was pleasantly surprised that the uplifting music, costumes, singing and dancing, made this experience one of pure joy.  Don’t miss the chance to see this cult classic, you’ll be glad you did.  Priscilla Queen of the Desert, is running through November 17th.