Dezart Performs is one of the most respected and accomplished theatre companies in the Coachella Valley, but they missed the mark on the selection of ‘Duck and Cover’. Michael Kimball’s script could almost be seen as a biographical piece if you are interested in seeing the early years of the most extreme, bigoted, racist and sexist of the fanatical right. As someone who fully appreciates history and loves historical fiction, the rants of an off balance man who sees a threat around every corner and holds his family hostage to his paranoia probably isn’t what I would consider valuable insight to our past.

Hugh Whitebottom, aptly played by Michael Shaw, is a relentlessly angry man, with no redeeming qualities, who sees little difference between the mental capacity of his wife and his 12-year-old son. Though ‘Duck and Cover’ is billed as a comedy, it appeared to be much more of a tragedy. It’s a story of a family living under the threat of the Cuban missile crisis in 1962 and are forced to accept the changing world around them, some adapting to the changes much better than others.

Hugh considers birth control the end of civilization, while his wife, Claire, played by the very talented Yo Younger, is forced to sneak around and buy her pills from the milkman, the friendly, talkative and sly Mr. Rippit, (Hal O’Connell) who doubles as a dealer of such nefarious drugs. Mr. O’Connell is an obvious professional and shines in his supporting role.

Ms. Younger’s performance is noteworthy and an obvious indication of her talent and acting capabilities. What modern day woman could play the role of a subjugated wife of a control freak, with a straight face? Her edge towards emancipation by the end of the show almost made the first act tolerable. Yo Younger makes this show worth seeing.

Uncle Bunny, the blast of fresh air that shines light in the dark corners of this captive household, is played perfectly by Scott Smith. Each time he enters the stage I am again hopeful for the survival of this family. And Robert Ramirez, as Eddie Savage, stole more than a few moments in the show.

Twelve year old Stevie Whitebottom, performed by Stephen Lee, is captivating in the role of the son, torn between being the man his father expects and just wanting a pair of Sneakers, a new fad that has taken hold and another sign to Hugh that the end of time is near.

Judith Chapman’s direction is most likely what saves this script from total annihilation. Each move seems to exemplify character and is driven by purpose. I must admit that Clair’s free flowing break out dance to the music of ‘Mack the Knife’, while housecleaning was a highlight for me. The overall flow and scene transitions were flawless.

I loved Thomas L. Villach’s set. It was compact and complete. It had all of the nuances of a 1960’s home, and simultaneously made me realize how the world of this family was closing in around them. Clark Dugger’s sound and Phil Murphy’s lights both provided an ideal ambiance of time and place.

While ‘Duck and Cover’ could probably be acceptable for all age groups, I would have to caution against subjecting kids under 12 to the show. They won’t get much out of it and may not understand the historical context.

Dezart Performs, gets a zero stars on Broadway rating, for having no shows written by women in their current season, or past few seasons. Though they have included works by women playwrights in their annual play reading festival.

Duck and Cover is produced by Dezart Performs, at the Pearl McManus Theater in the Palm Springs Woman’s Club through Sunday, February 8th.

Dee Jae Cox, is a playwright, director and producer. She is the Cofounder and Artistic Director for The Los Angeles Women’s Theatre Project and the host of KPTR 1450’s hit radio show, “California Woman 411” in Palm Springs. 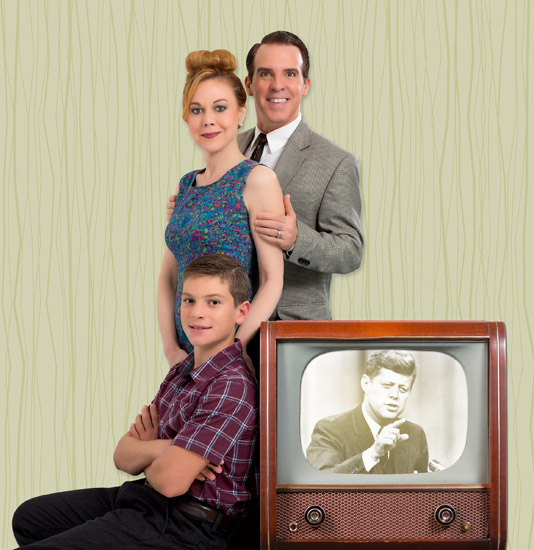