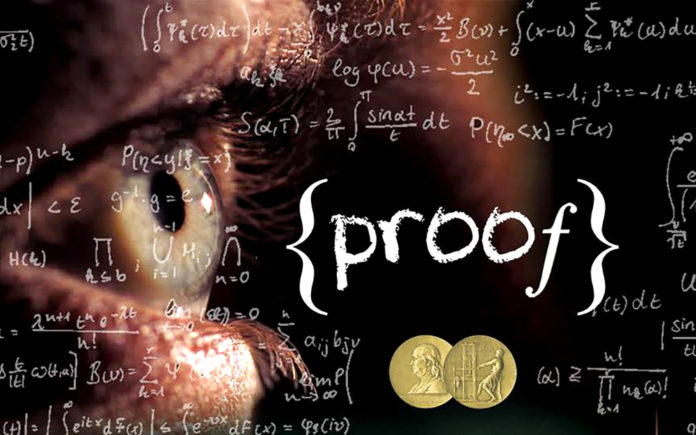 Aristotle said, “There is no great genius without some touch of madness.”  I have never seen a show that exemplified this assessment more than David Auburn’s Pulitzer Prize and Tony award winning drama, “Proof.”   Currently presented at the Pearl McManus theatre, Desert Ensemble Theatre’s production of ‘Proof,’ brings this intriguing drama to a new audience.

Proof, is a story of love, pain, genius and madness wrapped in an emotional cloak of distrust.  Under the guise of mathematical ‘proofs,’ (inferential arguments for mathematical statements,) the title also refers to the inherent distrust between the story’s characters. Catherine, played by Kelly Moody, is portrayed with such a heartfelt and genuine confusion about her life’s direction.  Whether she is a genius or an emotional train wreck, her experience of confusion and lack of clarity is one that most can identify with in young adulthood.

Catherine is turning twenty-five, very young by most standards, yet this is considered advanced age in the world of mathematics where genius peak is usually reached in the early twenties.  Her college education was disrupted by the need to provide care for her mentally ill father, Robert, (Larry Dykeman,) who is recently deceased and has now left his daughter searching for a new purpose.

Robert, who was once considered a genius level mathematician and his work is still highly revered in the field of mathematics.  Robert as such a sympathetic character, who, like many parents, struggled with the balance between encouraging his daughter to fly from the nest and simultaneously holding her back as his needs overshadowed her ambitions.  The father-daughter relationship is really the crux of this drama.

Catherine’s controlling older sister, Claire, (Lee Rice,) arrives from New York to attend her father’s funeral, sell the house and rescue Catherine, whom she considers to be emotionally unstable.  Rice, delivers an impactful performance as the older sibling who is confident that she knows best.  Robert’s former student, Hal, (Sam Benson Smith,) has been pouring through the stacks of notebooks left by Robert, in hopes of finding a spark of his former mentor’s genius in the midst of the mad ramblings.  An attraction develops between Catherine and Hal, but it is soon disrupted when Catherine reveals to Hal and her sister, a notebook that contains an undiscovered genius level proof that Catherine claims to have written.

The initial doubt and rejection of her authorship from Hal and Claire breaks down the fragile connectedness between the three of them.   To be honest I didn’t feel the chemistry between these two math geeks, Catherine and Hal, but their budding relationship is only a small part of the overall human drama that Auburn beautifully crafts in his script.

Genius and madness are the topics of exploration in this story as everyone must come to terms with the idea that there is often a fine line between the two diverse states of mind and that our effort to define others is frequently obfuscated by our own preconceived biases.

Desert Ensemble Theatre Artistic Director, Jerome Elliot, directed this stellar production and managed to bring the intrigue and humanness of the Broadway hit, to a smaller stage.  Lauren Bright’s set design, Ashton J. Bolanos’ lighting and Frank Cazares costumes all came together to create a wonderful night of theatre.

I highly recommend this show.  As I’ve often said, I like plays that make me think and feel.  This is definitely one of those kind of plays.
Proof, runs through March 24th.