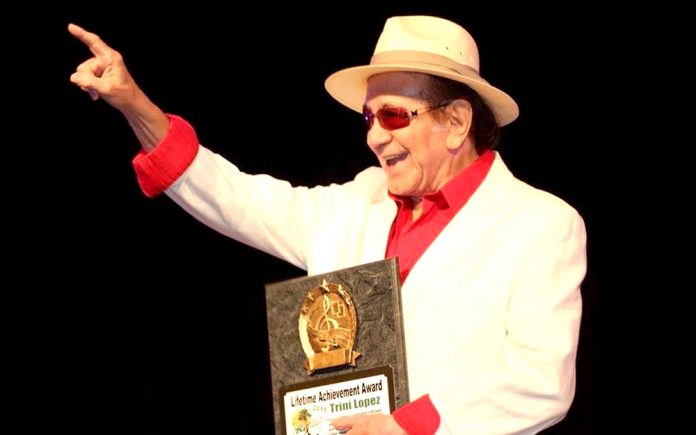 As you read this you will have likely heard the news that long-time Coachella Valley resident and 2015 Coachella Valley Music Award ‘Lifetime Achievement Award’ recipient Trini Lopez passed away due to complications with pneumonia and COVID-19. What you may not be aware of is that Lopez was working on music up until his death with American singer/songwriter, musician and performer Joe Chavira. 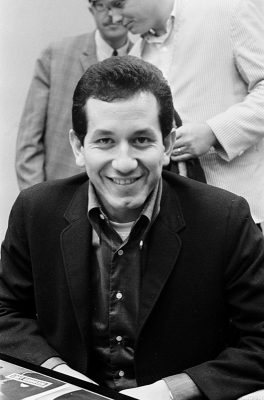 Born and raised in Dallas, Texas and first connecting with Lubbock, TX music idol Buddy Holly at age 17, Lopez has more than 80 albums recorded, a number of television appearances, a role as one of the original ‘Dirty Dozen’ and has several signature Trini Lopez Gibson guitars. Ultimately connecting with Frank Sinatra and releasing chart topping hits like ‘If I Had A Hammer’ and ‘Lemon Tree’, America’s first ‘Latin Pop Star’ was inducted into the International Latin Music Hall of Fame in 2003 and in 2015 was selected by the Southern California Motion Picture Council for a Golden Halo Lifetime Achievement Award.

Multi-instrumentalist Chavira was born in Montebello, California and raised in Santa Maria, CA. Together, he and Lopez collaborated to co-write 47 songs and 5 CDs in 9 months and co-created The Trini & Joe Reality Show.

Coachella Valley Weekly spoke with Chavira as he grieved the loss of his partner and adopted family member.

CVW: On behalf of all the CV Weekly family, our condolences to you and the entire Trini Lopez family. I know it’s still early on in the grieving process for you, but it seems that your initial meeting with Trini was predetermined.

Chavira: “He was like a dad to me when I lost my parents. My parents passed right when I met Trini and we adopted each other as family. I miss him a lot already. I met Trini at this function in 2015 at the Indian Wells Resort. There was a piano there and he asked me if I really wrote 800 songs. He said to play one. So I went over to the piano and started playing, everyone clapped but he didn’t. He just smiled. He said play another one. After I was done he stuck his card in my back pocket and he whispered, ‘call me if you want to make music history’. I called him and we got together. He said, ‘amigo, you’re going to be my new songwriting partner and I’ve never had a partner’. He never put anybody’s picture on his albums nor did Dean Martin, Sammy Davis, Jr., or Elvis Presley. He said we just made history, he’s never done this.”

CVW: You and Trini recently completed the song ‘If By Now’ to help benefit those dealing with COVID-19. It crowns a body of work you completed as a duo. Can you share more about that? 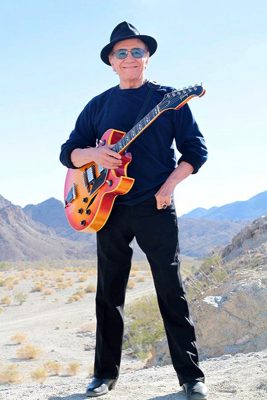 Chavira: “That song is Trini’s last work with me. We wrote the song to help others and will be released four days after his death. Trini is on these upcoming shows talking about it. Like an admiral going down with his ship, he dies with it but sends out the message. His family in Texas shared how much he loved me like a son and they want me to carry the torch, which Trini told me before he passed, with the legacy of what we’ve done together. He said, ‘I don’t want people to think I’m all about ‘Lemon Tree’ and ‘If I Had A Hammer’. The 60’s came and went, I want people to know I retired in ’81, but I met Joe Chavira in 2015 and he re-sparked me’. When he was with Reprise Records with Frank Sinatra he never did originals, neither did Sammy Davis, Jr. or Dean Martin. They were given material. This is his first time in 2015 at 77, he said he was proud to work with me and he wants people to know we did this. We did three albums together, 47 original songs and did it in less than nine months.”

Chavira: “We all know Ritchie Valens changed his name from Valenzuela. They asked Trini to change his name. He said no, he’s sticking with Lopez. Trini shared that with Frank Sinatra, he was crapped on because he was Italian and they asked him to change his name to ‘Frankie Trent’ but his dad was an old firefighter and boxer and said no, we’ll stick with Sinatra. The rest is history.”

CVW: By continuing your journey, you obviously are carrying on his legacy and keeping his memory alive while establishing your own.

Chavira: “Because of him, so many doors have opened. Sony Orchard Music out of New York called me. Trini told them we have three albums of original material and they signed us. They signed me with Trini and independently. I’m on all platforms as of three weeks ago. They released two of my singles, ‘Tantalize’ and ‘No Reasons’ with my album coming out in September 2020, all thanks to Trini.”

CVW: Listening to your collaboration on ‘Here I Am’ posthumously, it really does provide sentimental feelings about what was important to Trini.

Chavira: “Here I Am is about his life. He and I are in the video with his mom and his grandpa. At the end of the recording Trini cried a little talking about his family and I said, ‘we can do a re-take’ and he said, ‘no, I want people to hear that’. There’s a bit of a crack in his voice at the end. His buddy Paul Anka wrote a pretty good song called ‘I Did It My Way’, Frank Sinatra and Elvis covered it, they were his friends but he wanted something to be more personalized so I grabbed my guitar, we sat on his couch and we started working. ‘Here I Am’ is a beautiful acoustic guitar song with violin that talks about his life; his theme song. Now there’s talks about a movie called ‘Here I Am’ covering the last chapter of his life.”

Here I Am (Official Music Video)