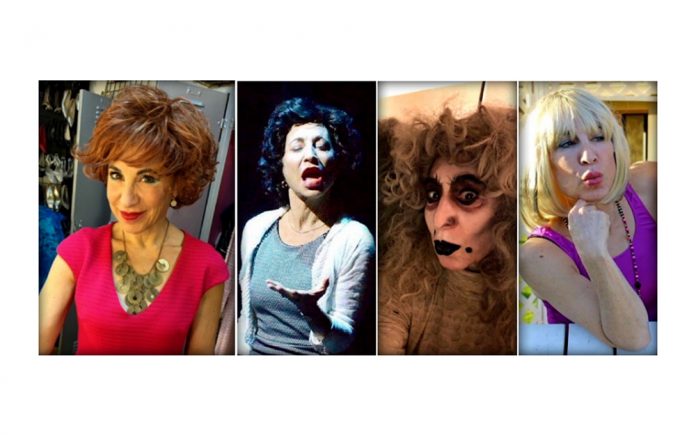 Although often used interchangeably, the words “fate” and “destiny” have distinct connotations. … Fate is about the present, where every decision an individual has made has led them to their present scenario. However, Destiny is the future scenario determined by decisions an individual will make.

When I first met Adina Lawson, it was fate.  It was in 2014 and I was directing one of the first shows I had undertaken since moving full time to the Desert.  It was a play called, “The Estrogen Map,” written by Jeanne Taylor.  I had cast and was rehearsing in the desert and then we were going to Los Angeles to be a part of INKFEST, playwriting festival, produced by the 2Cents Theatre Company.  Adina, was incredible in her role as ‘Cougar,” in this production and from then on, I knew that it would be in my destiny to see every show possible, that featured Adina Lawson.

Arriving in the Coachella Valley in 2012 from Humboldt County, California, Adina, quickly became one on the Desert’s most in demand theatre talent’s.  With an extensive background in teaching English and Theatre, she performed on a multitude of stages across the Coachella Valley.  Desert Rose Playhouse, College of the Desert, Palm Canyon Theatre, Dezart Performs, Desert Theatreworks, and Sun City have all produced shows that featured the various characters of this very talented performer. She has received Thirty (30) nominations and eight (8) wins from the Desert Theatre League Star Awards.  Appearing in shows such as “In the Heights,” (Both Palm Canyon Theatre and College of the Desert Productions.)  Fiddler on the Roof, Rent, and The Adams Family, (College of the Desert.) The Full Monty, Grand Hotel and Footloose, (Palm Canyon Theatre.)  Women Behind Bars, at the Desert Rose Playhouse and Damn Yankee, South Pacific and Pajama Game at Sun City Performing Arts.  (Partial list.)

Many of her performances I have had the good fortune to see and review. Adina Lawson is a name that will automatically make me want to see a show.  Her passions includes: singing alto harmonies, working in dialects, Fosse choreography, and dramaturgical criticism of texts. Admitting that she loves anything challenging, that makes her grow!

When asked how the social distancing and closure of theatre has impacted her work and life, she stated; “The pandemic has brought me lots of internally directed time— I feel that my yoga and meditation, as well as a deep dive into vegan nutrition has grounded me in a different way from how theatre grounds me. But this new quiet quality will, I believe, pay off in a deeper exploration of acting, singing, and directing.”

Social Distancing has not stopped many of the desert performing artists from finding creative ways to practice their craft and Adina is no exception.  I had a great time watching a fun Special Halloween Edition of MARTINIS AND MEMOIRS featuring Adina Lawson. It was a ZOOM presentation of primarily original works read by the authors themselves, Judy Siegel, Mary Bryant, Carolyn Todd, Jeanette Knight, Jackie Bivins, Nan Tomasko and Patricia West Del-Ruth. Sponsored by Three Amigos Entertainment. This was a wonderful Halloween treat.

Adina’s description of her upcoming directorial project gives us all something wonderful to anticipate.  “A zoomed stage reading of Paula Vogel’s superb and compelling play Indecent. Indecent is a play within a play, illuminating a classic play from the world of Yiddish Theatre. It is of particular importance to the LGBTQ community.  Produced by Green Room Theatre Company, it will air the Sunday and Monday evenings just after Thanksgiving, as well as once during Hanukkah. Be on the lookout for that on the GRTC FB page, or through any of my wonderful cast. If the fates agree, we’ll be able to do a fully staged production when that is available to all of us.”

I think that the fates have certainly brought great joy and talent to the desert in the guise of Adina Lawson. Make her part of your destiny when seeking out great theatre in the desert.