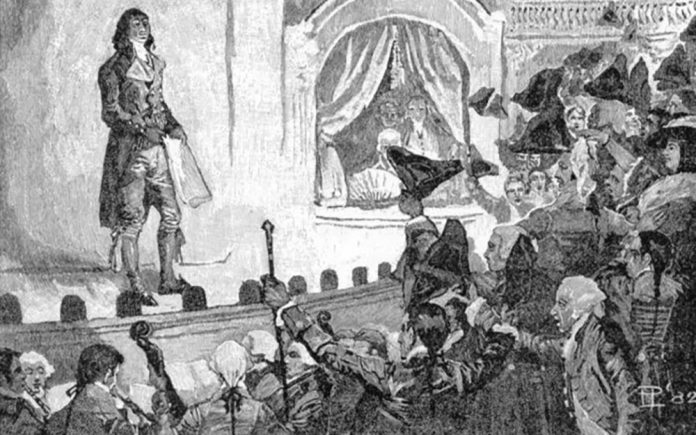 In the immortal words of Hamlet, “The Play’s the thing.” As America celebrates another year of independence in the midst of great economic and cultural change, it’s always interesting to take stock of where we come from. I love history and etymology.  How did this thing called theatre make its way to the British Colonies and take flight in the land we call America?

It’s common knowledge that theatre originated with the ancient Greeks. They loved their festivals.  But it has been a part of the American culture since long before the Colonies became a country known as the United States of America. Theatre followed us from Europe.  Repertoire from England was originally brought over that included productions like Shakespeare’s Hamlet and Othello.  The first American playhouse was started on the Palace Green in Williamsburg, Virginia by merchant William Levingston in 1716. That theatre was closely followed by the opening of the Dock Street Theatre in Charleston, South Carolina in 1730, Which is still currently in operation.

There was a brief time as America sought to break away from England, that it chose to distance itself from a lot of British culture, including Theatre.  In the beginning puritanical leaders sought to oppress the arts.  Prior to writing the Declaration of Independence, the first Continental Congress passed the Articles of Association, a document written in response to the British Intolerable Acts. The Articles called for a “discountenance and discourage [of] every species of extravagance and dissipation, especially… exhibitions of shows, plays, and other expensive diversions.”

As British rule and culture were rejected by the colonies, many aspects of British society, such as theatre, was denounced in the same vein as vices like gambling. The Puritans and the Quakers believed that theatre could present a danger to the “immortal soul,” and was in opposition to the Christian God.

But as English author, Geoffrey Chaucer, famously said, “Time and tide wait for no man.”  Even George Washington was said to be a fan of theatre. The Performing arts are a vital part of any culture and Americans soon loosened up their puritanical breeches around the 1800’s and fears about the ‘morality’ of plays began to subside.

By the opening of the 19th Century, Broadway began to coalesce and New York became the undisputed leader of the American stage.  The Civil War brought horrific instability and stress to Americans, but within a short time, theatre became the entertainment and distraction that was most needed.  And sadly, just 5 days after the South surrendered, President Abraham Lincoln was assassinated in Ford’s theatre by an actor named John Wilkes Booth.

By the late half of the 19th Century, power steam ships made transatlantic travel so much easier, (for the rich at least,) and European shows easily traveled to American stages.  Vaudeville became popular, performances included anything from trained animals to one-act plays and magicians. A lot of known celebrities of the era got their start on the Vaudeville stage, including comedians Abbot and Costello, singer Judy Garland, Stripper Gypsy Rose Lee and magician Harry Houdini.

In addition to Vaudeville, throughout the 19th  and early 20th Century, Minstrel shows were also popular.  These were skits performed by white men in blackface, who demeaned the African American population.  Prior to WWII, Vaudeville had become one of the most popular forms of live entertainment, but interest began to wane in the 1930’s and by the start of WWII, Film was becoming a popular medium.

It was during this time of transition when Vaudeville was disappearing and film was gaining prominence, that musical theatre claimed its space on the stage.  Who can resist the magic of music and choreography?

Following WWII American theatre really began to come into its own.  Playwrights like Arthur Miller and Tennessee Williams began to see their works not only on American stages, but being produced internationally and American Theatre took a serious turn. The shows being produced during the Civil Rights era of the 1950’s and 60’s, did what theatre does best, they reflected the societal changes that were taking place. Social consciousness began to shape works that were more aligned with the civil rights movement, and populations other than ‘white men,’ who had dominated scripts and productions, began to slowly open up to more diverse voices.

In the 21st century Broadway productions have built on the success and revitalization of earlier shows, with productions becoming more elaborate and expensive. Popular modern musicals, such as Lin-Manuel Miranda’s Hamilton and Stephen Schwartz’s Wicked have proven successful with modern audiences, while dramatic productions such as Tony Kushner’s Angels in America continue to address social justice concerns.

In a country that has endured major periods of transformation in its relatively short existence, American theatre has remained a popular form of expression due to its ability to adjust to change– a fluid industry that adjusts to the social setting it finds itself within.

Even now due to current circumstances and most stages remaining dark, Theatre Professionals continue to look for ways to adapt.  Theatre is always reinventing itself in order to be a relevant reflection of American society and culture. Live Stage performances have survived the invent of film, television, radio and the internet. American theatre has a long and culturally relevant history. There is no doubt that as the country adapts to these new circumstances, theatre will be a frontrunner in creating the changes we face.  “The Play’s the thing.”