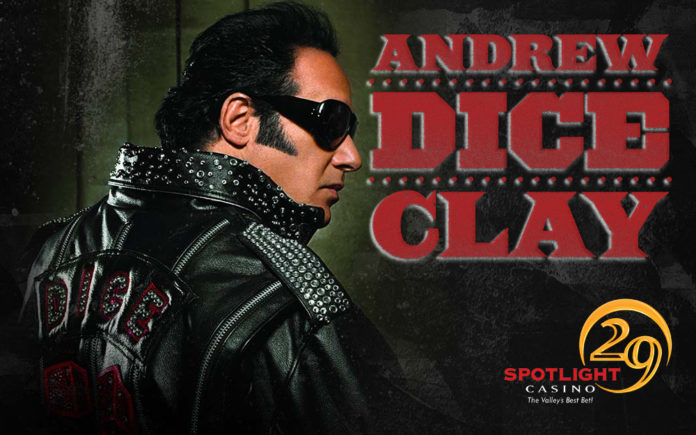 Andrew “Dice” Clay started his career in the early ‘80s in New York. Initially, “the dice man” persona was only one of his characters, but it quickly became popular and he took it on full-time. Clay soon moved to Los Angeles and started landing roles in various T.V. shows. After a few years doing T.V. Clay again returned to stand-up and his career took off. By 1990, Clay had a HBO special, a staring role in a film written for him called The Adventures of Ford Fairlane, and became the first comedian to sell out Madison Square Garden.

In recent years, Clay has been enjoying a renewed success in T.V. and film. He stars in a semi-autobiographical show on Showtime called Dice, he had a recurring role on Entourage, won the cooking show, My Kitchen Rules, and will be playing Lady Gaga’s father in Bradley Cooper’s film A Star Is Born. Some keys scenes of A Star Is Born were filmed right here in the Coachella Valley during last years Coachella fest and Stagecoach. Clay is taking some time out of his busy shooting schedule to do some live shows. One of which is right here at Spotlight 29 Casino on Saturday, October 28.

Coachella Valley Weekly: Was acting something you were pursuing at the beginning of your career or was your focus just comedy?

Andrew “Dice” Clay: “It wasn’t even about comedy. It was all about acting. Instead of going to an acting school once a week, I would be on stage every night developing myself as a performer. Whether it be acting or comedy, or whatever.”

CVW: The Adventures of Ford Fairlane seemed as if it were written for you. Was that the case, or was it a lot of improv?

Dice: “A lot of improv, but obviously there was a lot of writing for me. Ford Fairlane that used to be in newspapers. It was about a rock ’n’ roll detective. It’s funny… they’ve been playing it a lot lately. A lot of people ask if I’m gonna do another one. I go, ’what am I gonna do? Do it when I’m on a walker?’ Nah, I could do it, but studios don’t operate that way. I would definitely do another one.”

CVW: Do you still enjoy being on the road, or would you prefer a residency?

CVW: How do you find the time to tour with your filming schedule?

Dice: “You do it in-between. I try not to do it that much. I was doing a residency at The Trop(icanna) for like two years. The touring was minimal. I don’t tour that much, I just did like 15 concerts on the East Coast. Now it’s back to Hollywood to do some of this acting stuff. I just got done filming Hap and Leonard for Sundance network which I had to go to Atlanta for.”

CVW: Is it difficult for fans to differentiate between the “Dice” persona and you as an actor?

Dice: “No… you know what? It’s what I always wanted to do. Since it’s what I want to do, I really couldn’t care less about that. People enjoy it. It’s a big compliment when you get a fan who says, ‘I loved you in Vinyl’ or ‘I loved you in ‘Blue Jasmine.’ Now I’ve got A Star Is Born coming out with Bradley Cooper and Lady Gaga. I play the father in the film.”

CVW: Did you do any of the filming out here in the desert?

CVW: Any comedy specials coming out?