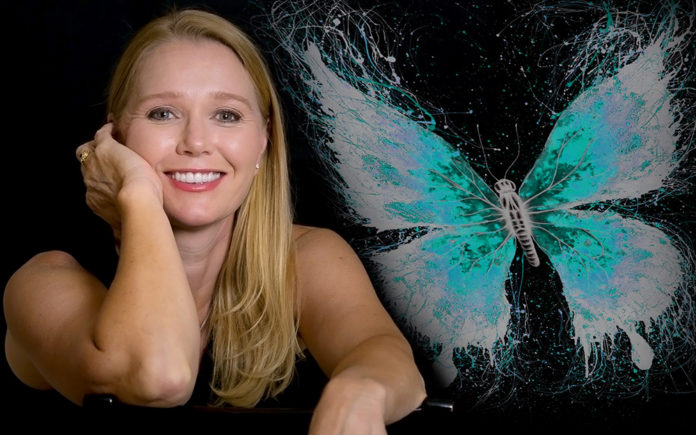 When Big Rock Pub, in partnership with Coachella Valley Sexual Assault Services (CVSAS), put a call out to local songwriters to write an anthem for those harmed by human trafficking, several artists answered the call. Anne-Britt’s song, “Butterfly,” was selected among five others.  Little did we know what kind of impact she would have on everyone in attendance.  This is her story.

“All my life I’ve been an athlete. I began swimming at age 7 in my native Denmark. Ten years later, I was the national champion in the 200m backstroke. After moving to Palm Springs in 1992, I took up ice skating and advanced to the adult nationals when I was 26. I’ve been a swim coach, and recently became a certified Pilates instructor. I’ve also pursued my passion for singing including local gigs, appearing in musicals with Palm Canyon Theater, and studio recording. My love for singing originated in Denmark where I grew up singing every morning at school. I went on to perform solo at Tivoli Gardens and with the Danish National Church Girl’s Choir. Until last year, I was on track with my two great passions, singing and teaching. My Pilates practice was taking off at Infinity Pilates, and I was booking gigs from Palm Springs to La Quinta. I was in heaven.”

“In mid-May of 2018, I had what appeared to be some sort of gastrointestinal issues. I waited until my annual physical in early June to see a doctor. The next several months were taken up with test after test after test. Everything came back negative with some minor exceptions which led to a brief cancer scare. Once cancer was ruled out, I continued seeing a variety of specialists until I started to have difficulty walking. August 10th was the first day I needed assistance walking.  By August 26th I was in a wheelchair. I’ve been in one ever since. More testing ensued and, after a couple of visits to the ER, my condition was deemed to be neurological. I’ve been under the care of a first-rate neurologist at UCLA since September 2018. My initial diagnosis was Myalgic Encephalomyelitis, but while that accounted for the extreme fatigue it didn’t explain the paraplegia, muscle spasms and paralysis I’ve been experiencing. Last week I was given an additional diagnosis of Functional Neurological Disorder.  Between those two conditions, all my symptoms are accounted for. The cause is unknown, the details of what’s happening in my brain and body are not known, and there is no known treatment other than medications to manage the symptoms. The prognosis is also unclear. I could get better, worse, or stay the same.”

“With so much of my life taken away from me, I’ve turned to music and songwriting for a creative outlet. I originally wrote “Butterfly” as an expression of my frustration and sadness about getting sick. Not knowing what’s wrong with my body has been especially difficult. When I sang my song for friends, family and colleagues, I was surprised to see how the song touched anyone who had sadness or frustration in their life. When I saw an ad in the CV Weekly for the “Songs for Freedom” songwriting contest, I knew “Butterfly” would speak to victims of sexual assault and human trafficking, or anyone suffering from misfortune not of their own doing.”

“Of all the performances I’ve ever done, performing at the “Songs for Freedom” songwriting contest is the one I’m most proud of. It’s the first time I’ve ever sung an original tune in public, and I did it while battling some very challenging health problems. As a young swimmer in Denmark, I had a mantra that translates to ‘I can. I will. I must.’ I called on that spirit to get me to the stage. But once I began singing, I was transported to that place where only music can take you. Sharing my song, my art, my feelings with others who may be suffering, was a healing experience. Through music I want to stay as positive, grateful and upbeat as possible. As a teacher, my greatest satisfaction was helping other people. I can’t teach right now but singing and songwriting is a great new outlet for me. The more I can help others, the more I am helped.”

Anne-Britt’s performance of “Butterfly” was spellbinding, commanding the full attention of a packed bar, setting a tone for an incredibly impactful event. While it was a strong contender, her song was not ultimately chosen as CVSAS’ anthem.  This anthem belongs to her, to take with her to others, wherever she goes. Like its composer, the song is awe inspiring.

Anne-Britt and her song “Butterfly” will be showcased at Big Rock Pub Saturday, September 28th at 8:30 PM along with contest winner, Mikayla Fazzone’s “Stronger than Me.”  If you are in need of a little inspiration in your life, you will get more than you bargained for by attending. CVSAS will be present with an information table and solutions to deter human trafficking here in the desert.  It will be followed by a night of live music and dancing with Lisa and the Gents.