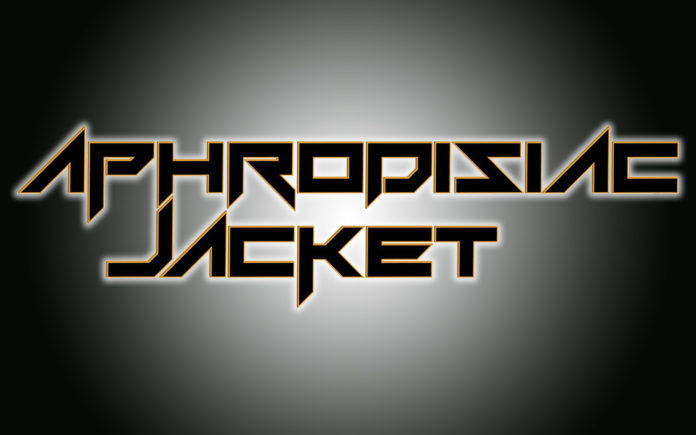 Actualized in 2014, Aphrodisiac Jacket first performed at the former Desert Music hub Schmidy’s Tavern in Palm Desert in early 2015. Since then they have played shows with The Iron Maidens, Metalachi, Delta Doom, Mighty Jack, Blasting Echo, Waxy, Long Duk Dong, Whiskey and Knives, The Hellions, Alice Unchained, Mozaiq, 5th Town, Wyte Gye and Grand Scovell at well-known venues like the Date Shed, The Hood and Tack Room Tavern. They were nominated for ‘Best Cover Band’ at the Coachella Valley Music Awards in 2015, 2016 and 2017. I have seen them perform several times and my girlfriends and I always found ourselves dancing to many of the songs that are surprisingly sexy and got our asses out of our seats.

On Saturday, February 23, 2019, Aphrodisiac Jacket will be performing with reinvigorated rockers Empty Seat and full of life punkers FrankEatsTheFloor at The Hood Bar & Pizza for the inception of The Rock Show. Presented by Coachella Valley Weekly and Desert Music, The Rock Show is also a collaborative between Melrose Music Palm Springs, Steven Young Photography, and DC Promotions. Each company has offered a special rate for their services to each artist as a fringe benefit for being participants in The Rock Show. Laine Rinker III of L3 Lighting and Design will provide his above-and-beyond illumination and lighting for the performance. Cost of admission is $5.

For this show, the Barrera, Bowman, Bryson, Gentry and Gutierrez line-up will be making their debut. I spoke with these fine gentlemen during one of their rehearsals at Bowman’s music sanctuary at his home in Palm Desert.

Montoya: Jerry, you just started playing with these guys right?

Bryson: “Yes, my first show at La Quinta Brewing Co. was great! I had a blast! It’s always an amazing thing when you meet the drummer and guitar player for the first time while they’re setting up their gear to play ‘the show’ and nailing all the parts LOL! It was a pleasure and hope there’s more shows in the future.”

Montoya: That’s hilarious. So that was the first time you met Benny?

Montoya: Jerry, what’s your earliest connection to The Cult?

Bryson: “I listened to nothing but thrash metal when I was young and used to sneak my sisters Love album when she was gone because I liked it so much. That was the first album I heard by The Cult. Then when I realized it was cool for me to listen to them, I bought Electric when it came out and couldn’t wait for Sonic Temple.”

Montoya: What about you Jeff, any cool early stories?

Bowman: “True story, in 9th grade, my buddy and I were way into The Cult’s Electric album, and we were going to get jobs at Carl’s Jr. at the mall, just long enough to buy a guitar and a drum set so we could start a Cult tribute band. We never did, but 30 years later, here I am! I am so grateful to be a part of it with these fun and talented guys. I have seen several AJ shows and it’s always a great time.”

Montoya: Marc, you were the catalyst for all of this. What an amazing list of musicians.

Gentry: “It’s still fun to play the music of The Cult, anytime, anywhere with any bros that enjoy their music as well.”

Montoya: I know the song Aphrodisiac Jacket is a Cult song from the Electric album but what does it actually mean?

Gutierrez: “Salvador Dalí is the surrealist/artist who designed the ‘Aphrodisiac Jacket’. It was a men’s dinner jacket covered in shot glasses filled with liquor. He actually wore it first before he displayed it and asked people to drink from the glasses using straws. If you look at the lyrics of the song they combine everyday things like a lobster and telephone. Much like Dali did with his art. I did my research.”

Montoya: Noe, you’ve been the only vocalist thus far. How have you stayed safe?

Gutierrez: “Ha ha, yeah, I’m pretty sure I’m not the only one who can sing these songs. I really admire Joe Mora’s (House of Broken Promises) vocal abilities. I know he’s a huge Cult fan too! We actually asked him to sing Bad Fun for the 2/23 show. I would welcome anyone who can do Ian’s vocals justice. I’ve talked with John Garcia about coming up at some point but he’s kinda busy touring the world so…Overall, I’ve had some of the best times singing in this band.”

Montoya: You’ve had a couple of guest vocalists in the past right?

Gutierrez: “Yes! I’ve had the honor of singing Rain with Courtney Chambers and Fire Woman with Kelly Derrickson, I mean, c’mon! These ladies are icons in my opinion and they aren’t done establishing themselves. I’m singing a song with Red from Empty Seat for The Rock Show as well. It’s going to be a blast to learn from her. She knows her stuff and has mounds of vocal experience.”

The rotating list of musicians in this group is pretty amazing. If you have an opportunity to see Aphrodisiac Jacket perform live you should get to the Hood on 2/23. They don’t play often and if you like rock music you can dance to I’ll see you there!