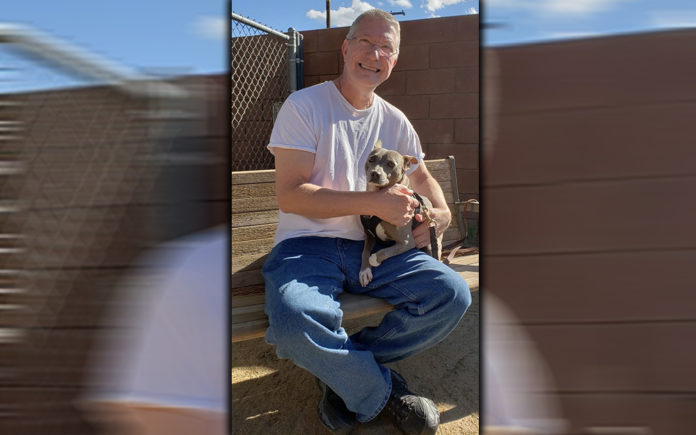 The dog huddled in the back of his kennel at the public animal shelter, frightened, shut down and hopeless.  He was terrified when they brought him in.  A local resident contacted the Desert Hot Springs Animal Care and Control Center shelter regarding a stray dog they had brought into their home.  The responding officer suspected from the dog’s demeanor that the caller was quite possibly an owner who didn’t want him anymore.  He underwent the 5-day stray hold awaiting any person who might claim him as their pet.  No one came for him.

The shelter staff named the dog Arnie, and estimated his age to be about 5 years old.  The dog had several strikes against him, in addition to being another homeless dog in a county overwhelmed with stray and unwanted animals.  Though only 22 pounds, Arnie he looked like he might be part “bully breed”.  He did not look like a highly adoptable dog in a community where many folks seek poodles, and other little fluffy pups.  Who would want to adopt a dog who withdrew every time he met a new person?  He had scars on his face, the origin of which are unknown.

Kathlyn “Kat” Palmer, animal care center technician, gave Arnie treats which he hesitantly accepted.  Kat sat with him in his kennel, hoping her presence would bring him some comfort.  Eventually she took him into her office to hang out, and occasionally he would sleep on her lap while she worked.

Kat was concerned about Arnie’s fate if he went to the county shelter at the end of his stray hold.  Kat contacted local rescue organization Loving All Animals explaining, “We wanted him to have a chance.  If Arnie could transition into a loving foster home, he would have a chance for a great forever home.”  Jan Cooksley agreed to foster for LAA, and Arnie was out of the shelter. 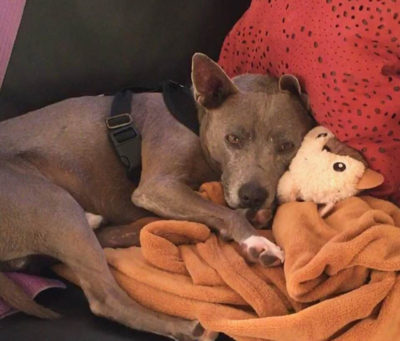 Jan observed, “The first thing I noticed was his sad and distant eyes.  Arnie had very little emotion, and his eyes seemed to look right through me.  It took about 24 hours for him to relax.  Wish I could have got into his head to find out what happened to this gentle, sensitive boy.  He was clearly abused.  After he was neutered, I slept on the living room floor with him to make sure he didn’t lick his incision.  He loved that, and he started to open up and we became pals.”  Eventually, Arnie was moved to the organization’s Pet Rescue Center shelter so that he could become socialized with the other dogs.

There was much debate and discussion about Arnie’s breed.  The DHS shelter listed him as an Italian greyhound mixed with Chihuahua.  Some people thought he resembled a small pit bull, though his snout is more narrow than most of this breed.  Another “expert” guessed he was a mix of Italian greyhound and Basenji.  Whatever his breed, the shutdown dog was deemed difficult to adopt.

Tom Meyers was thinking about getting another dog.  He went on the Loving all Animals website (www.lovingallanimals.org) and saw Arnie’s photo.  Tom recalls, “I half hoped the he was already adopted when I called about Arnie.  I was in the midst of some life changes.  But somehow I couldn’t stop thinking about Arnie.  Today, Arnie could not be a better dog for me, he is my little miracle, and could not be any more special.  He’s a star wherever we go.  People always try to guess what breed he is.”

Initially Arnie did not want to leave the Pet Rescue Center, clinging to the place that was “home” for a while, not trusting the change.  Thankfully dog trainer Jim Turcott was present for the transition and helped get Arnie into Tom’s car.  All went well at Tom’s house and a message arrived with Arnie’s picture contentedly sitting on the living room couch, “Arnie had an excellent first night.  He has already claimed two recliners that face the golf course.  Thank you for saving him just for me!”

When a scared rescue dog finds the right home, a magical transformation takes place.  Arnie who was so withdrawn, today exudes a sense of confidence.  Tom’s partner’s dog, Rosie, introduced Arnie to the world of dog toys, and the dog who never played has discovered new joys. The dog once terrified of getting into a car now enjoys frequent car trips with Tom.  The dog who once cringed when meeting strangers now happily greets them.  Folks inevitably ask the same question, “What kind of a dog is Arnie?”

What kind of a dog is Arnie?  He’s a wonderful, amazing, loving, smart, happy, loyal dog who, thanks to some caring people, got a second chance.  Kudo’s to Kat Palmer and the staff at the Desert Hot Springs Animal Care and Control Center who are truly committed to helping their city’s homeless animals.  Kudo’s to foster parents like Jan Cooksley who has fostered and loved 22 homeless dogs.  Kudos to adopters like Tom Meyers who proclaims, “There are wonderful, grateful shelter dogs out there that are not fluffies or puppies.  I can’t thank Loving All Animals enough for the gift of Arnie.”