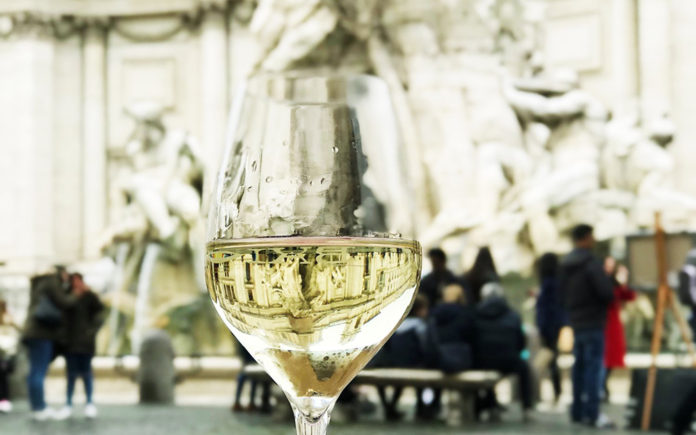 Departing from Rome just over a week ago was almost difficult.  I’m not talking about logistics; rather, we just didn’t wish to leave.  I imagine so many travelers who fall in love with the land they’re visiting, conjure up ways and means to sell everything as to be able to live in their new cherished surroundings!

I think we’ve heard this before: When in Rome, drink wine as the Romans do.  But what are they drinking? And how many of you wine enthusiasts can actually name a wine that comes from the region ‘round  Rome?

I’ve written previously that one would think with all of the stereotyped images of the joyful, relaxing, and delightful atmosphere of the Roman afternoon—la bella vita di far niente (the good life of doing nothing) and the bella figura lounge and promenade people-watch, that there would be a plethora of famous Roman wine flowing from out of the City of Seven Hills like waters from the famous water fountain—The Three Street Fountain, known in Rome as the Fontana di Trevi, continuously does.

Well—where is all this Roman wine!  The fact is, the huge metropolis of Rome has for millenniums enjoyed great wine from everywhere else in Italia—remember all roads lead to Rome—so why spend any appreciable time and effort producing wine when you have barrels of great Barolo and other strains of Nebbiolo from the foothills of the French-Italian Alps—Piemonte; wine from the great vineyard areas of Verona and the Amarone produced there; and the blood of Jupiter grapes—Sangiovese gushing from the beautiful landscape of Tuscany.

And from the south, gorgeous dark bold wine from Puglia—the heel of the boot; the Godfatheresque era red wines from Calabrese and Sicily that you “shove” in the pot when preparing spaghetti sauce; and the whole spectrum of wine from all of the ports around the Mediterranean Sea.

So perhaps all this wonderful wine flowing into Rome explains why the Eternal City has no need to produce wine.  Wait a minute!  Did you just say Rome doesn’t produce great wine? Get your bearings folks!

Perchance, one of the reasons we Americans do not recall any good or popular wine produced around Rome is because our Italian geography fails a bit.  Sure—we know Florence and their Chianti is in the Tuscany region; Alba and Asti with their Barolo and Moscato being in the Piemonte; Verona with Bardolino and Amarone in the Veneto region; Trentino-Alto Aldige with their Pinot Grigio; but who can name the geographical region that Rome sits in?

That would be Lazio—the modern name for Latium from the Roman Empire days. And as we would easily guess, people in Latium began cultivating the vine thanks to the previous inhabitants, the Latins that (as confirmed by Pliny the Elder) learned refined agricultural techniques from Etruscan populations who themselves learned from the Ancient Greeks.

Modernly, more than 85% of Lazio wines are white, and I think you’ve heard of them: Trebbiano and Malvasia.  But remember back in the day, when boatloads of red Chianti wine were pretty insipid, too acidic, and sometimes quite stinky?  Well, that era also took a toll on the Lazio Trebbiano and Malvasia—more often the wine wasn’t made very well, and the Americans lost interest fast.

But, with our brave new world of wine, winemaking is at its best, and a lot of Roman wine is world class and delicious.  Of course, no wine is more identified with the City of Rome than Frascati.. It can be dry or sweet.  It’s the most often mentioned wine in Italian literature and Pope Gregori XVI drank it all day long. Typically dry (“secco”) with flavors of white peach, lemon zest, chalk, and herbal notes reminiscent of Thai basil and bitter green almond, the best wines are typically labeled Frascati Superiore, which is a slightly higher production standard.

We recently ate at a wonderful restaurant right across the street from the Roman Colosseum.  With an English name, Crab Restaurant, it served the freshest and sweetest crustaceans, oysters and local fish.  Our waiter was also a trained sommelier and he turned me on to a local white wine that only the Romans drink because there’s not enough produced to send anywhere else.

Bellone, also known as Cacchione, is one of the lost and forgotten white grapes of Lazio that’s said to have quenched the thirst of Romans of antiquity.  It’s found growing primarily in the regions to the southeast of Rome (Castelli Romani region).  Not wishing to drink a heavy-laden wine for a late lunch, I inquired of the Italian sommelier about the alcohol level of the Bellone.  He thought the wine was around 13% or so; but when he brought the bottle to the table, the label read 14.5%.  I balked, thinking that it would be like a full-bodied Chardonnay that can oftentimes take down a steak!

But I could tell by his expression and demeanor, that he really wished to share the Bellone; and to boot, it is a very rare wine for us, so we said, Va bene! Facciamolo! And thankfully so: It was a light silvery lemon color wine with a delicate nose of Asian pear, ripe apple, papaya and just a hint of lemon. On the palate the wine was not as full-bodied as I anticipated but more on the medium side with fairly high acidity and the same fruits appearing. It was the perfect pairing for our fresh and fried crustacean feast along with the fresh Anzio fish.

Any foodie and wine enthusiast will absolutely love this restaurant that’s easy to find in the center of the Eternal City.

Rick is your Italian wine-guide; you should really take him along when going to Italy. Contact winespectrum@aol.com